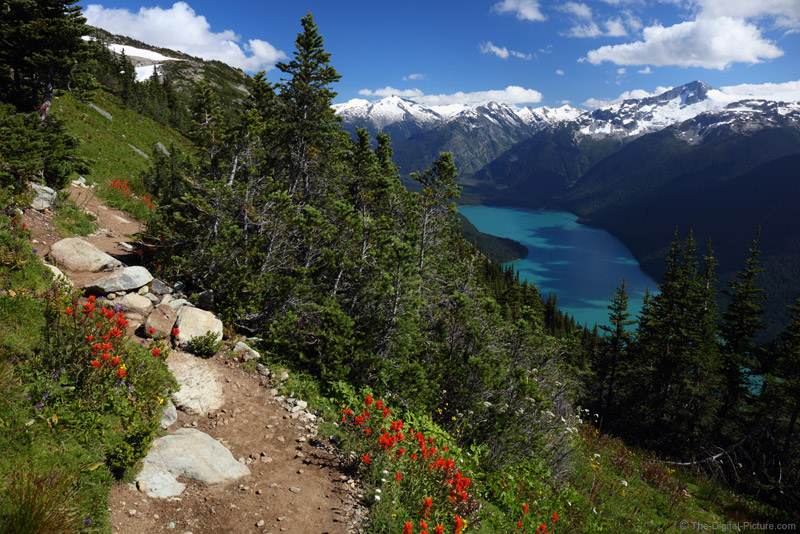 The girls were my support staff on this trip and we rolled into Whistler late in the afternoon after a challenging 10 hour drive through western Canada. We checked into the hotel, unloaded, drove to the other end of the village to park in the free lot and began walking back through the village to find dinner. The girls were a bit vague about what we were doing on this end of our trip ("Whistler" wasn't a location they knew much about) and they were quite awestruck as we came into the beautiful and impressively-designed Olympic village. Fitting were the Olympics rings being one of the first sights seen in the village as the 2016 summer Olympics were scheduled to begin a few days later. To be at one of the 2010 Vancouver Winter Olympics venues was very fun to them.

I knew that our schedule was tight (and I was really tired and hungry), so I tried to keep moving them along (vs. stopping at every shop we were walking past). We finally found a restaurant (with reasonable prices and still open), ate and went back to the hotel. It was nearly midnight until we got to bed and that meant the morning was not going to be an early one as I needed enough sleep to drive to Vancouver the next night.

By the time we packed in the AM, finished breakfast and waited in line for lift tickets, it was afternoon and we arrived near the top of Whistler at about 2:00 PM. As we got off of the gondola, we noticed a sign stating that the last lift ride down was at 5:00 PM. While it would have been nice to know that piece of information before heading up the mountain (and even better to know it the night before), the 6 mile (9.5km) High Note Trail was a high priority and we were determined to make loop trail hike happen. We had another line and chair lift to go before hitting the trail head and we proceeded. So, we were left with about 2.5 hours to do the moderately difficult hike with photos of course being the primary goal.

Although I had the MindShift Gear BackLight 26L loaded with several lens options, I mounted the Canon EF 24-70mm f/4L IS and left the pack on my back for the duration of the hike, due to the time constraints. That lens mounted to the Canon EOS 5Ds R worked great for the scenery encountered on this hike. I hadn't brought a tripod along and, with image stabilization doing its job, I didn't need one.

If photographing landscapes during the middle of a sunny day, I nearly always have a circular polarizer filter installed and did on this day. By cutting reflections, these filters significantly increase saturation, making colors "pop".

The hike ended up being mostly a run with stops for photos while trying to resist some of the constant photo temptations along the way (for time reasons). At about 7,000' (2,133m) in elevation, the view over the valley 5,000' (1,524m) below (including the turquoise-colored Cheakamus Lake seen in this image) was continuously spectacular. The timing of this trip, to coincide with wildflower season, was also perfect. I captured numerous images I liked and, though exhausted, made it back to the lift in time to ride down. That was a very good thing as hiking the 3 mi (5 km) down the steep mountain would have been rough at this point.