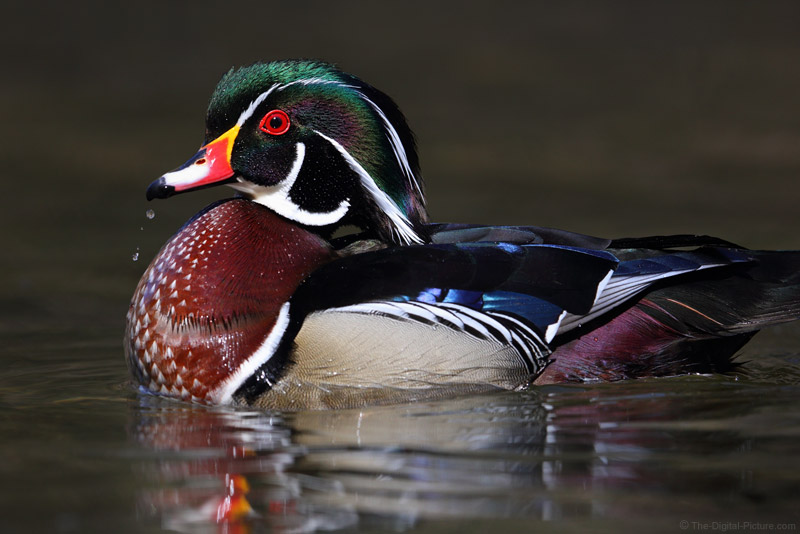 Photographing amazingly-colored wood ducks has been on my bucket list for a long time and, when I located some potential subjects, I dropped everything and made the 6-hour round trip drive to photograph them.

Upon arrival, I was able to quickly locate the wood ducks. However, they proved to be a big challenge to photograph due to their constant, often-quick movements and the ideal lighting angle required, minimally, for their iridescent colors to show.

I ended up using the 600 with 1.4x on the 5Ds R the entire time due to the distance and rather small size of the ducks. The 840mm focal length gave me a deep ideal subject framing distance. I captured environmental portraits when the birds were distant and tight portraits when they came close, a logical tactic that provided a variety of subject framing in the take-home.

The subjects were in constant motion and that means AI Servo AF mode was required to keep them in focus. Specifically, a focus point needed to be constantly placed on the wood duck's eye. I shot in Case 1 (general purpose) and Case 5 (instant adjustment for erratic motion) AF Modes on this day with Case 1 showing the best results. I also used the 5 fps burst drive mode, in part because birds blink with some frequency. Capturing minimally a few frames at a time usually results in at least one fully opened eye.

In the end, the daytrip was very worthwhile, with hundreds of keeper-grade images resulting from the effort.

As seems often the case (I think that Murphy has a law to cover this), the image with my favorite pose had some minor motion blur due to the drake raising its head rapidly. To counter this, I reduced the overall size of the image (down-sampled) modestly. Along with some modest cropping, the remaining 5Ds R-captured image still has about 15 megapixels of resolution, an adequate amount for many uses. I used a layer mask to darken the background modestly, helping to place emphasis on the drake.