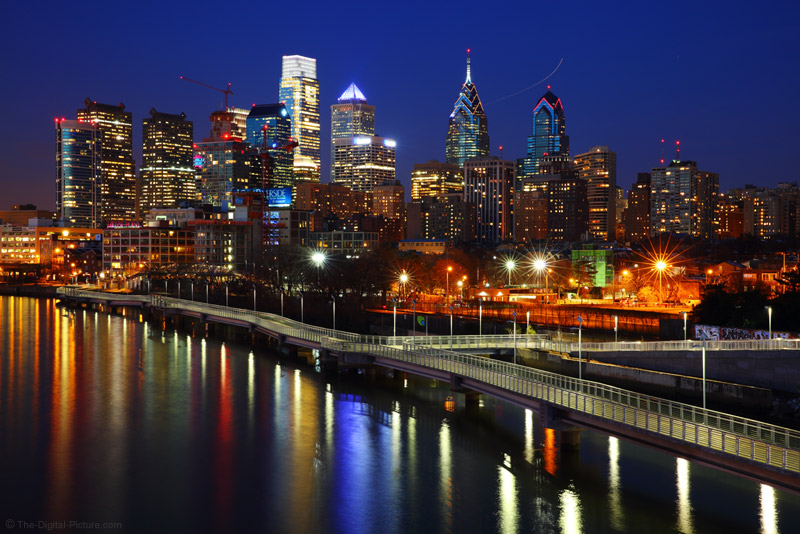 After researching potential Philadelphia photography locations, I decided to make the sunset and blue hour view of center city from the South Street Bridge my priority. After conveniently parking at the Penn Museum parking garage, I carried a MindShift Gear BackLight 26L full of gear a short distance to the bridge to finalize my scouting. As expected, the bridge piers could be photographed from, eliminating the potentially major mid-span issue of bridge movement caused by vehicle traffic. Satisfied with my plan, I went on to explore the great Philadelphia riverfront and some of the inner city.

I came back to my bridge position about an hour before sunset, setup two tripods and cameras and began taking some long exposures using 6 and 10-stop Breakthrough Photography neutral density filters, capturing the setting sun bathing the city in warm color. Warm color turned into orange in the sky for another nice set of images. But, the best was yet to come.

When the lights in the city became sufficiently bright relative to the sky, the images took on significantly more sparkle – exactly what I was looking for. While I have a very good idea of when this time is happening, I shoot images from before the expected time until the color in the sky is gone. I later select the image captured at the most-ideal time as it is most easily discernable in post.

A 30 second exposure was ideal for eliminating moving people from the image (the riverfront walkway was filled with walkers, joggers, bikers, etc.) and for blurring the water. While a far wider aperture would have provided an adequate depth of field for this image, but f/11 and f/16 create larger starburst effects from the lights. An even narrower aperture will create even larger stars, but I find the detail-softening effects of diffraction to become too strong for this purpose beyond f/16. At this capture time, f/16 at 30 seconds needed ISO 200 for the desired brightness. I could have gone to a 1-minute exposure and ISO 100, but with long exposure noise reduction turned on, that means 2 minutes per image and I wanted a faster capture rate.

Post processing adjustments to this Philadelphia skyline image were primarily adding saturation along with a minor curves adjustment. Often the case when photographing city lights is that some areas of the photo are illuminated more strongly than others, often the photogenic tops of skyscrapers go pure white first. To counter this issue, I captured bracketed exposures and selected a 2-stop shorter variant to put the color and details back into the triangular-shaped gridded roof-top on the BNY Mellon Center building via an HDR process. I usually remove airplane light trails, but ... the up-curving arc, to my eye, seemed to work in this image, so it remains.

I mentioned using two complete camera and tripod setups. I was using a pair of Canon EOS 5Ds R cameras with the Canon EF 16-35mm f/4L IS USM Lens on one (capturing a wider image including the west side of the Schuylkill River) and the Canon EF 24-70mm f/2.8L II USM Lens on the other, capturing a more-tightly framed image emphasizing the city's great architecture with the riverwalk providing a strong leading line into the frame. The two cameras in simultaneous use essentially doubled the take-home from the prime time of this day's shoot.