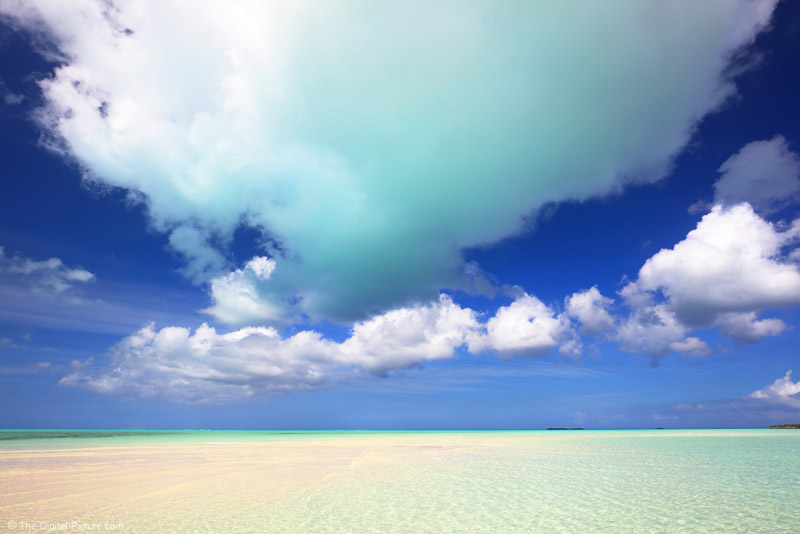 When the clouds become turquoise, you are probably in a great place.

The day started out with no clouds in the sky. After having photographed for 6 days straight prior with good results, I was looking for more than what a clear sky would deliver, so some scouting was the task at hand. The selected location for the day was Wild Cow Run, at the end of Middle Caicos. From my base location in Whitby Beach, North Caicos, this meant a drive through most of North Caicos, across the causeway and through most of Middle Caicos. Then, at the end of the road, a 4x4 road was traversed until going further becomes impossible.

Your reward for this drive is one of the most beautiful beach locations in the world with seldom another person seen. I had hiked about a mile out when some nice clouds began forming on the horizon. Seeing great images beginning to materialize, I ran and swam back to the vehicle, grabbed a Canon EOS 5Ds R with an EF 16-35mm f/4L IS Lens mounted, threaded a circular polarizer filter onto the lens and put the setup in an EWA marine underwater housing.

I know, an underwater housing does not make sense for capturing an above-water image of beach, water and clouds, but ... you may have noted the "swam" part when returning to the vehicle. I had to swim (fins, snorkel and mask) through a channel with a swift tidal current to reach the island with the beach I was targeting. I was not using the camera underwater, but the housing was perfect for the water transportation to the scene.

Once across the water, I removed the camera from the housing, stowed the housing (and snorkel gear) high on shore and hiked over sand and shallow water to reach the desired location. The huge expanse of sand and shallow water had my greatest attention. I was looking for angles and heights that would work best while keeping the clouds in pleasing locations within the frame. The clouds were moving in rapidly and I was shooting quickly, monitoring mostly my manually-set exposures from time to time, keeping the brightest parts of the clouds nearly blown.

What I wasn't noticing was that, as the clouds came closer, they began reflecting the amazing fluorescent turquoise colored water behind the reef, which was located a distant 1.4 mi (2.25 km) from shore at this location. Upon uploading my images for the day, I realized that the clouds, as they came in closer than the reef, had picked up a very strong color reflection from the water below. The result was something I had not captured before, turquoise-colored clouds.

Photography (usually) rewards effort – effort pays off. It was definitely worth the effort of a round trip to the vehicle to add this (and many other similar) images to the collection. I'll leave the "foresight to take the camera with me the first time" topic for another day.