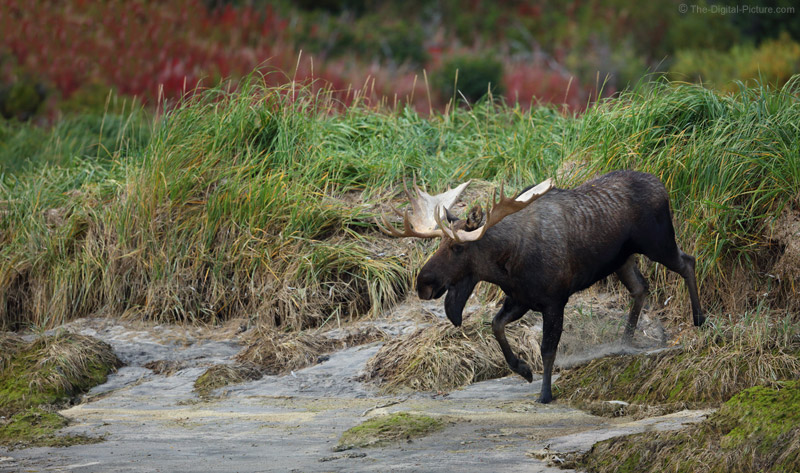 With Alaska being such a massive state, it is only fitting that many of the Alaskan animals are also large. This huge bull moose looked very impressive walking down off of the mountain, initially with only its antlers rising above the trees.

Know what our bear guides were most afraid of? Moose. We spent days sitting among brown bears, some weighing well north of 1,000 lbs, with nothing more than minor issues, but a huge bull moose walking down off the mountain directly toward us definitely got the guide's attention. To reduce the drama, I should also say that part of the attention grab was because the sighting was so unusual in this location – this was the only land mammal other than brown bears that I saw in coastal Katmai National Park.

While moose were not my primary photography target at the time, I consider myself an opportunist and didn't hesitate to turn the camera from the bears when this bull showed up.

The moose was walking at a steady-but-leisurely pace and I could easily fill the camera buffer whenever I chose to, but that would have given me too many images that were similar to each other. Instead, I timed the frame captures with body positions that I thought would make a good composition with an eye also on the background. The body position I often chose had the far front leg in a forward position.

While I did not hold the shutter release down, I did shoot more images than I thought I needed. Aside from having insurance shots, I was trying to use a marginally long shutter speed, allowing a lower ISO setting to be used for less noise. Though a handful of my images were slightly blurred, the tactic proved to be a good one as I still ended up with many good images.

When the bull moose came to the edge of the high tidal stream bank, it proceeded to smoothly drop right over the edge. I caught that action nicely and might share it later, as soon as I get over being slightly bothered by the antler covering the eye. What I didn't correctly anticipate was the speed of the moose's decent and the base image for this shot, the one with the far lead leg in the air and sand flying, became cropped slightly too tightly on the bottom of the frame. Capturing some quick additional shots with different framing allowed me to create a panorama in post, correcting the tight crop and resulting in a 76-megapixel image.

With that much resolution available, cropping into the bull moose much more tightly remains an option, but I like seeing the environment the moose was in and especially like the fall-colored fireweed in the background.

What do you think? Should I have cropped this image tighter?