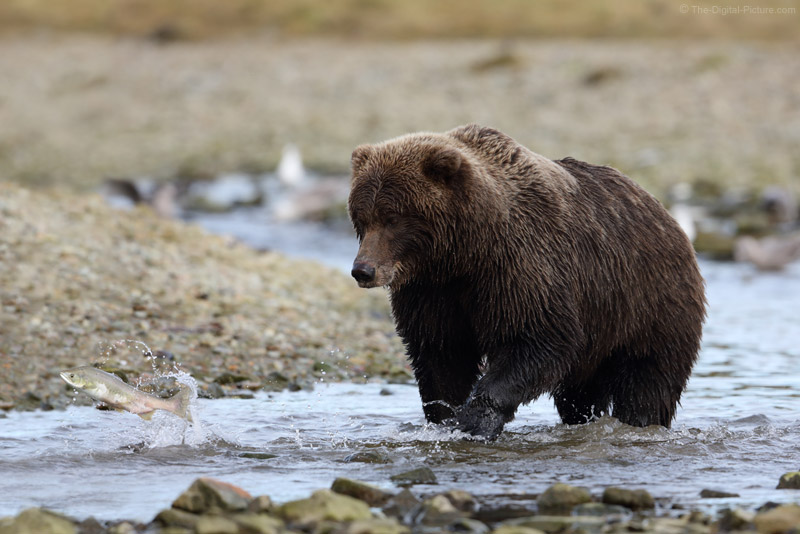 Did I ever find the 600mm angle of view too narrow when photographing bears in Coastal Katmai National Park? Sure, that's why I had the 100-400mm L IS II lens mounted on a second body and ready for immediate use. When I saw action moving closer, I would quickly switch cameras and continue shooting. The gap between 600mm and 400mm usually meant that I could begin using the 100-400 maxed at the 400mm end with plenty of time before I needed to begin zooming out.

But, I didn't always make the right choice. Sometimes, something unexpected happened. When the 600mm choice was wrong, sudden movement taking the bear out of ideal framing was usually the reason. Or, something happened at the border of the frame, such as another bear coming into view. The result was that I have some frames that are cropped too tightly in camera and this was one.

Really, I would never have guessed that a salmon was going to leap out of the water this high while in such a small stream (quite a feat actually) and that the leap would be this far ahead of the bear, but ... the unexpected is certain to happen on occasion.

The too-long focal length problem is not limited to the 600mm focal length. Even full-frame-mounted 100mm was slightly too long for some enormous brown bears that approached very closely (well under 20').

The big question is: "What do you do when your focal length is too long?"

It is far more common to be focal length limited on the long end and recovery in that situation is simple: crop. Though cropping reduces overall image resolution, it is usually better than having an important part of the scene missing.

The solution to being focal length limited on the wide end: shoot a panorama. If you ever find your lens framing a photo framed too tightly, shoot multiple images and merge them into a panorama later.

Here is the key for wildlife and other action photography: the panorama technique is not limited to very intentionally captured still life/landscape images. Even if you have a subject in motion and can't recreate the original subject pose, a panorama can sometimes be created. A frame with a cut-off in motion subject can be hard to recover, but adding border space to a fully contained subject is often easy.

As immediately as possible after the capture of a frame needing more border, switch the lens to manual focus and the camera to the last-used exposure settings while retaining the selected focal length (easy with a prime lens). If the focus distance and/or focal length changed after the primary photo was captured, do your best to reset them. Then photograph enough additional images to cover the framing that was missing in the original image. Back at the computer, merge the images together in Photoshop or your favorite image editor.

Fortunately in the case of my Katmai National Park brown bear and leaping salmon, I was able to take another frame from the burst and merge the two together. While Brooks Falls is known for salmon leaping toward bears standing at the top of a falls, capturing salmon leaping away from pursuing brown bears was one of my biggest goals in coastal Katmai National Park. When I saw this capture meeting my goal, I knew that the extra time required to piece a panorama together was going to be worth taking.

Apply this technique to your own photo subjects. Did you photograph your kid kicking the winning goal in the soccer match but not leave enough border on one or more sides of the frame? Another frame in the capture sequence may hold that missing border. If not or if you are not sure, capture a couple of additional identical-settings frames to work with later. It may even be possible to go back at a later time or date to recreate the missing portion of the frame (with similar lighting strongly desired).