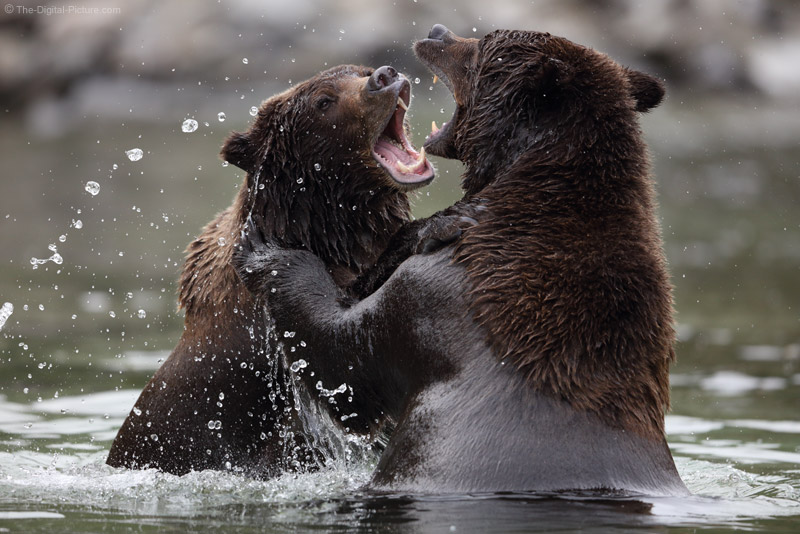 My coastal Katmai National Park brown bear photography trip was a big one for me and I wanted to take the best-available gear with me. As the camera is the foundation for a photo kit and the Canon EOS 5Ds R, with its incredible resolution, great color and very good noise performance with a handling, feature and AF package to match has proven to be, for me, the ultimate camera to build a kit around. With a pair of these bodies in my kit, it was not hard to select them as two of my bodies. The question remaining was, what was going to be the third body?

On such a trip, I seldom take less than three camera bodies. Although I sometimes use all three at once, more frequently is that the third is ready for backup use in case something unfortunate happens to one or both front line bodies. With a significant amount of wading in various depths of water (including salt water) involved on this trip, one fall and the unfortunate could easily become a reality. And, I wasn't going to be receiving a next day air shipment via UPS or FEDEX out there.

The 1D X's extremely fast frame rate was an especially attractive feature for bears in action and that I already owned this camera made it a cost effective solution. That I would need to take an additional charger/batteries was a downside as was the "only" 18-megapixel resolution.

The 7D II's primary advantages were not dissimilar from the 1D X: the fast frame rate and the budgetary concern as I already owned one of these as well. That this camera shared the 5Ds R's battery system was a positive feature. That the smaller APS-C sensor would show more high ISO noise at the same output dimensions and would not produce the same amount of background blur as the full frame options were negatives.

My primary question about the 5Ds R option was the frame rate – would 5 fps was going to be fast enough for the bears in action? Not far behind the frame rate concern was the additional cost factor. In the end, the 5Ds R's ultra-high resolution full frame sensor with 7D II-matching pixel density (reach) and along with the latest-available feature set won my favor. And, I simply love this camera. While this need was ideal for the rental option, I opted for the additional purchase in this case. My camera math said that the over-two-weeks rental cost was greater than the purchase price minus resale value minus additional use value. I'll get plenty of use from this body to justify the cost of ownership.

Having three identical cameras meant that switching bodies required no thought (though the 7D II is essentially the same also). They all had the same controls, the same menu options and the same setup configuration.

Was 5 fps fast enough? It was. While I am an opportunist when it comes to subjects, my primary photography subjects were brown bears. Bears (unless sleeping) are in nearly constant erratic motion and present an AF challenge, but they were mostly moving in slow to medium speed. One exception was when they were trying to catch salmon, but even then they weren't moving close to the speed of a bird in flight, as an example. I had plenty of photo opportunities and could often time single frames with body positions I found favorable.

Would a faster frame rate have been better? Yes, there were probably some shots I missed due to the frame rate not being fast enough, but ... having to sort through a 2x higher image volume a faster frame rate would have generated would have completely buried me. It will take me many months to work through the daunting roughly-10,000 bear images I captured on this trip.

Was high ISO performance important? Definitely. The trip started out with an approximately 28 hour float plane departure delay due to rain and heavy fog and things didn't get much better with 2 of the four remaining days on the coast holding the same weather. My most-used ISO setting was 3200. The ultra-high resolution, full-frame 5Ds R has a noticeable advantage at ISO 3200 when resized to a similar resolution as the 7D Mark II.

Was the ultra-high 50 megapixel resolution an advantage? Definitely. While I'm still teaching myself that it is OK to frame a bit looser with the ultra-high resolution being delivered by the 5Ds/5Ds R, I have many 600mm images that will be cropped due to the distance of the subject. These images can be cropped down to a 960mm-equivalent angle of view with the 7D II-equivalent 20 megapixel image remaining. With the range of focal lengths I had along, a majority of my images will remain at or near full resolution, resulting in great detail for very large output.

While I titled this photo "Brown Bears Fighting" and technically they are fighting, this is a mother and her second year cub. The mother is teaching the cub to fight, but the fierceness was toned down to more like hard playing. This is an uncropped EOS 5Ds R image captured with the EF 600mm f/4L IS II USM Lens.

Fortunately, the playing lasted a long time and I was able to capture a large variety of shots of the behavior. I varied the aperture during the event, but only between f/4 and f/5.6 with some additional depth of field being the narrower aperture goal. In AI Servo AF mode with the one-up-from-center focus point selected and placed on the left bear's leg, the plane of sharp focus aligned ideally over the bears' noses. This placement kept both faces sharp even at f/4 and the wide aperture removed all background distractions.

I have no regrets regarding my camera choice - I would make the same decision again. Hopefully my camera decision logic made sense to you. If not, ask questions!