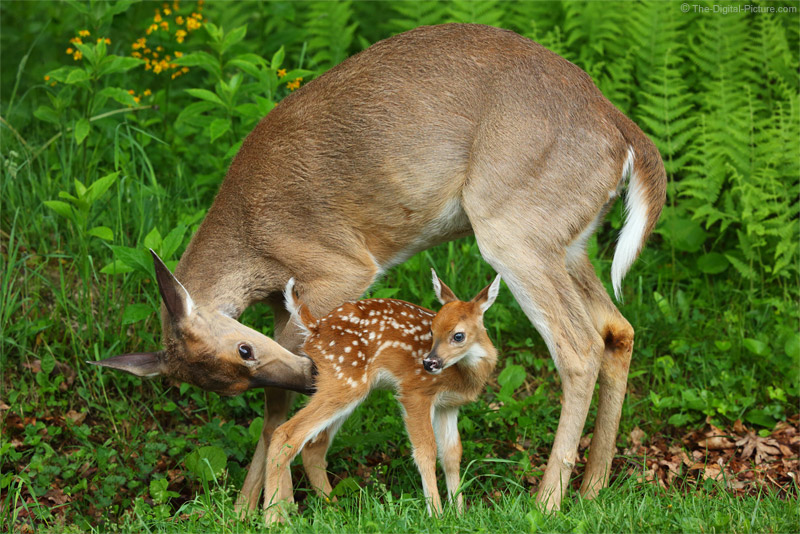 Spring is when most baby animals make their entry into the world and who doesn't love a baby animal photo? Baby animals are the definition of cute.

Create your spring baby animal photography plan now (regardless of the season you happen to be reading this tip in). Determine what your baby animal subject(s) is(are) going to be, determine where they are located and plan on being at the right location to photograph them when they are introduced to the world.

This year, my animal of choice was the white-tailed deer. Newborn whitetail fawns are about the cutest animal on the face of this planet. They are also full of energy and very playful, making them very fun to watch.

My selected location for white-tailed deer fawn photography was Big Meadows in Shenandoah National Park. Whitetail fawns are born in late May and Early June, and I made it a priority to be there in that time-frame.

Watching the weather forecast about a week out, I booked a lodge room for one night. I know, that date was too far away for anyone to accurately predict the weather, but I needed a bit of planning time. The weather forecast was for "cloudy" and that meant I would have decent light all day long and wouldn't need to concern myself with harsh shadows even in the woods.

A couple of days later, the forecast changed to sunny and another day later the National Weather Service began calling for about 80% chance of rain for both of the days I would be there. I prepared for rain (rain gear for both me and the camera equipment along with a large umbrella). What I didn't plan for was heavy fog the entire two days and I really didn't expect it to rain most of the time I was there, but that was reality.

While I sighted many deer, those with fawns were not interested in being in view of photographers (even when approached in a vehicle). The fog drastically reduced contrast and cut realistic photo distances down to 30' (10m) at times, so approaching was necessary. After a long day, what I really felt like doing was hitting bed early the first night, but I continued the effort. That perseverance was rewarded when watching a doe in front of some bright ferns at the edge of the woods.

The ferns made an interesting background and as I was photographing her, she was bleating. Deer bleat to communicate, so I knew that there was another deer or a fawn nearby. With no warning, the cutest little fawn came bouncing out of the woods and began nursing.

The adorable fawn drank with fervor and I shot similarly, capturing nearly 200 images in the about-8 minute long encounter. While the fawn drank, the mother cleaned it and when the fawn finished drinking, it peered out from under the mother, providing additional poses including this one (I also like this image cropped tighter, emphasizing the fawn and removing the bright ferns). Then both went back into the woods and darkness came over the scene soon after.

While my trip overall was not one of my more productive efforts, but 8 minutes with one of the world's cutest animals produced a series of images that made the effort worthwhile.

On this trip with ultimate image quality being my goal, the Canon EF 100-400mm f/4.5-5.6L IS II and Canon EF 200-400mm f/4L IS (used for this image) were my wildlife lenses of choice with a Canon EOS 5D Mark III mounted behind them. When hiking longer distances, I carried the 100-400 L II and also used it from the car at times when the light was strong enough. The 200-400 L was my choice when the light waned and often used it on a monopod when not moving too far from the car. Both lenses and the camera performed amazingly.

Determine which baby animal you want to photography this or next spring and create your plan to photograph it!