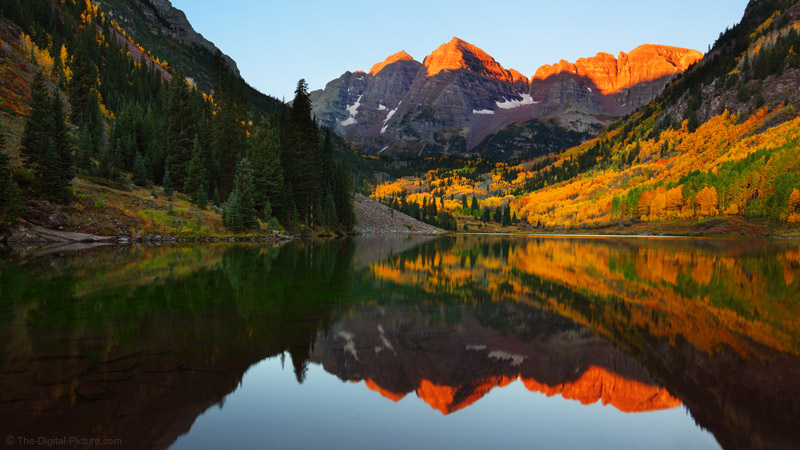 Revisiting a classic: I shared an image similar to this one some time ago, but a publication needed this scene in a 16:9 aspect ratio, meaning that a wider-angle capture was required. Since I was making the effort to process another image from that trip (and it is fall), I thought I'd share here as well. I'm also sharing this image because the Maroon Bells Scenic Area is one of the most beautiful locations I've seen.

Maroon Bells has many great landscape image components. Start out with a pair of tightly-positioned fourteener mountain peaks (Maroon Peak and North Maroon Peak) with great character. Mix in some of the most-brilliantly-colored trees on the planet along with beautifully color-contrasting and photogenically-shaped spruce trees. Add light from a clear-sky sunrise just reaching the mountain peaks while the namesake maroon rocks remain in the shade with the cooler lighting emphasizing their color. Take all of that and double it with a reflection in the clear, often-still Maroon Lake that also happens to have some bright green algae growing in it.

Capturing the image was easy. The lake is only a short trek from the parking lot. Setup the tripod, focus and switch to manual focus mode, establish final scene framing, lock down the ball head and capture a burst of exposure bracketed images (the burst strategy is helpful because that sun line is moving down the mountain faster than it may seem). That sounds easy (and it was), but capturing the exposure stack was just the final bit of effort required to capture this image.

Getting a position for one's tripod at the side of Maroon Lake during peak leaf color at sunrise is far more challenging. This particular location gets one of the largest crowds of photographers I've seen outside outdoors. An extremely early alarm is required after, for most of us, a long trip to get to the Aspen, Colorado area in the first place. While photographing alone in the wilderness may seem more appealing to you, the folks on the lake shore (most of them at least) are very friendly and fun to hang out with as daybreak unfolds.

Another challenge awaits your arrival home. Manually processing the HDR stack of a scene with brightness ranging from direct sunlight transitioning immediately to shade on into deep shade (such as within the spruce trees) is a remaining challenge required for this image.

As so often is the case with photography, all of the challenges were worth conquering to get the image, many of them in this case.

A reflection can double the beauty of a scene and a second camera setup can often double (or at least significantly increase) the number and variety of images captured at the optimal time of day. When photographing a scene such as this, one that requires significant effort and has a high reward potential, I generally have two cameras on tripods simultaneously capturing the moments. In this case, the lenses mounted were two of my favorites, the Canon EF 16-35mm f/4L IS USM Lens and the Canon EF 24-70mm f/2.8L II USM Lens. While the choice of a "wider-angle" image may lead your guess to the model used here, both had the 24mm focal length used here available to them and I didn't have much reason to choose one over the other for this specific image.