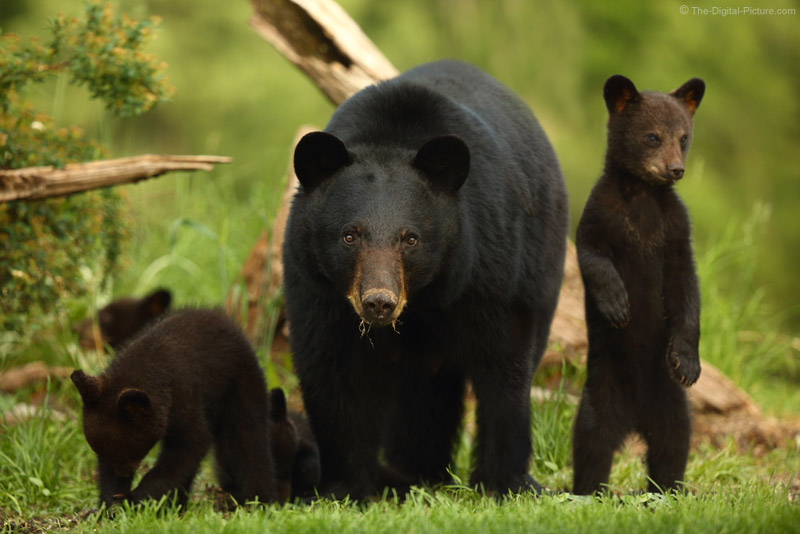 The cubs were very fun to watch. They were in non-stop motion, running around, climbing on things (including mom) and playing with each other (rolling over each other). This activity level meant that things happened fast. Getting all four cubs in a single frame was very challenging (an image with less-than-four cubs would be far less remarkable) and a decent composition of the same was nearly impossible. Having the 200-560mm (with built-in extender) zoom focal length range was extremely helpful in this situation.

In this specific scenario (my only 4-cub image worth posting from this encounter), I decided to center the primary subject – the apparently-not-happy momma bear. I generally like to compose animals (and people) with more space on one side frame – so that they are looking into the frame. But, the large bear was positioned straight forward and looking (more like glaring) in the same direction with cubs on either side adding balance. I moved the camera just slightly to the right of perfectly centering the large bear to give the cub on the right a little more room to look into the frame because it was a "stand"-out.

Selecting the ideal aperture was another challenge for this encounter. At f/4, I needed and an ISO setting of 800 to get a barely-adequate-for-the-activity 1/320 shutter speed. At 300mm, at this distance, the under-1' (.3m) depth of field provided by f/4 does not keep more than the primary bear's eyes in focus. Using a narrower aperture of course provides more depth of field, but it also requires raising the ISO setting.

Raising the ISO to 1600 would have been acceptable to me, but ... I didn't want to go to ISO 3200 and the resulting f/8 aperture would have provided a still-not-nearly-deep-enough DOF of about 1.5' (.5m). Yes, the cubs would be less out of focus with the narrower apertures, but the background would also be more-focused, creating less separation from the big bear. As is often the case, there were multiple setting combinations that would have worked for this example and a compromise was required. I'd probably make the same decision the next time.