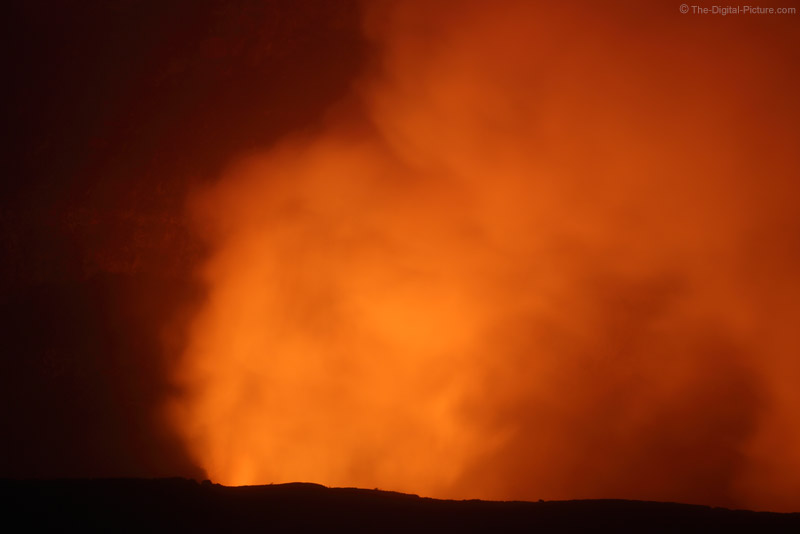 Kilauea Volcano, in Hawaii Volcanoes National Park, is currently the only active volcano in Hawaii.

I had only one day allocated to Hawaii Volcanoes NP and unfortunately, the day was nearly completely a rainout. The rain was heavy, the fog was thick and the wind was very strong. I didn't even attempt to photograph with the rain protection I had along for both myself and the camera gear.

The plan was to end the day at the Jaggar Museum on Crater Rim Drive. This location provides the best view of the Kilauea Caldera and the glow that rises from it after the sun sets. Actually, I contemplated ending the day completely and heading back to the hotel as my AM flight was a very early one.

While the rain did not end, it did slow down and perhaps more important, the fog lifted. The glow became apparent - and I felt the calling. I put the camera and large lens in a large garbage bag (small hole stretched over the lens hood) and began photographing. I lost a lot of images to blur caused by the wind, but have a very solid collection of "keepers". It was very worth staying for this show.

Note that I would rather have had my Wimberley Tripod Head for this shoot, but I couldn't keep my checked luggage under weight with this piece of kit included. The Arca-Swiss Z1 worked superbly as always. I just had to make sure that I had a good grip on the lens when the head was not locked.