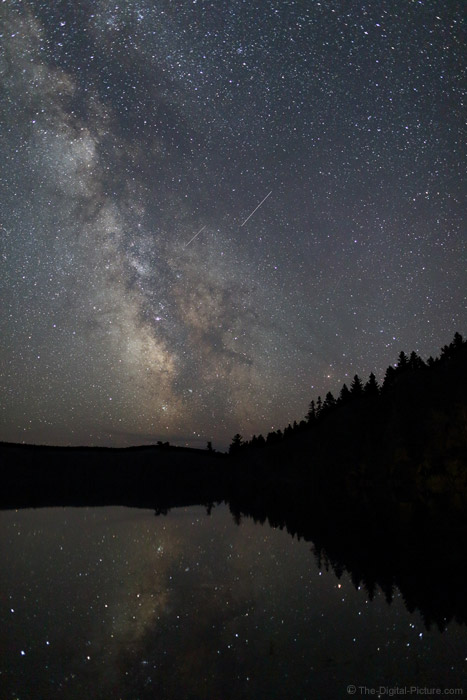 In this picture, the Milky Way is reflected in Island Pond in the North Maine Woods as a pair of ... satellites streak through the night sky.

Island Pond is in the Deboullie public area of T15-R9 in northern Maine. This location is a 1 hour drive from the grid and from paved roads. Along with natural beauty, what you get here is a dark sky.

The Milkway itself is beautiful and with the right gear and settings, it is easy to capture a beautiful picture of the Milky Way. Taking this simple picture to the next step means adding foreground. For this example, a silhouetted tree line provides a very nice and not-too-hard-to-find foreground. The reflection of the Milky Way and tree line in the completely calm Island Pond takes the image to the next level.

By coinciding the trip schedule with the annual Perseid Meteor Shower, the hope is to get streaking Perseids as another detail to add to the image.

Adding all of these pieces together results in one of my favorite images from the trip. Here are some considerations from the making of this image:

One of the biggest issues with shooting stars at night is that it needs to be very dark. Obviously, the sun must be set - that's easy to schedule around. The moon phase and its location in the sky (no moon is best) can also be scheduled around. I had about an about-2 hour window to capture my star photos prior to the moon lightening the sky on this night.

Because it is dark out, a wide aperture lens is strongly prefered. I recommend an at-least f/2.8 lens and the Canon EF 24mm f/1.4 L II USM Lens is typically with me when I travel to dark sky locations. Wide angle focal lengths work best for this type of shot.

Even when using a wide aperture lens, long exposure times are needed. While the night sky appears very motionless when looked upon, stars are a subject in motion (from our perspective - due to a rotating earth - the earth is really doing the moving) and subject motion blur becomes apparent at the exposure times needed to generate a bright-enough night image. While an equatorial mount solves that problem, this solution does not work as well with a foreground included in the frame. These mounts are also a significant added cost.

High ISO settings are what I use. You need to select an ISO setting high enough to allow an exposure short enough to control the star trails. At 24mm, I prefer to keep exposures at 15 seconds (though I can accept 20-25 second images). Wider angle lenses will tolerate longer exposures - Longer focal lengths will show star trails more strongly at 15 seconds. Longer exposures also make a meteorite more likely to become part of your image. Or satellites (as shown here). Or an airplane (I cloned one out of this image)

I used ISO 3200 for this image, but pushed the sky exposure an additional stop and the foreground an additional 2 stops during post processing. An f/2 aperture was used for this image. The lens used has an f/1.4 max aperture, but I was experimenting with the reduced vignetting at f/2.

I highly recommend enabling long exposure noise reduction (an in-camera setting) when shooting the night sky. For each image captured, the camera takes a second, same length, exposure without the shutter open. The dark frame is then used to mask noise out of the first frame. Of course, all of the meteorites will show up during the dark frame.

Long exposure noise reduction, when used in conjunction with very long exposures, means that there is a lot of time spent waiting. Getting to this particular location had a relatively high cost - especially including time and energy. So, having two cameras simultaneously in use nearly doubled my take home from this night shoot.

The Canon EOS-1D X, with its incredible low light performance, was my primary DSLR for this shoot. Again, you are looking at an ISO 3200 long exposure picture that was pushed by 1 and 2 stops. I used the Canon EF 24mm f/1.4 L II USM Lens on this camera.

On my second tripod was a Canon EOS 5D Mark III - another excellent-performing camera. The 5D III had a Canon EF 14mm f/2.8 L II USM Lens on it much of the time.

The two camera setups gave me more compositions and more meteorite captures per hour. Both performed spectacularly. The viewfinder horizon level feature found in these two cameras was especially useful when framing the extremely dark scene.

I use Live View manual focus (find a bright star at 10x) and the 2-second self-timer with mirror lockup for shoots such as this one.

Shooting the night sky is a lot of fun - both from a results perspective and from the simple experience of watching the beautiful starry sky.