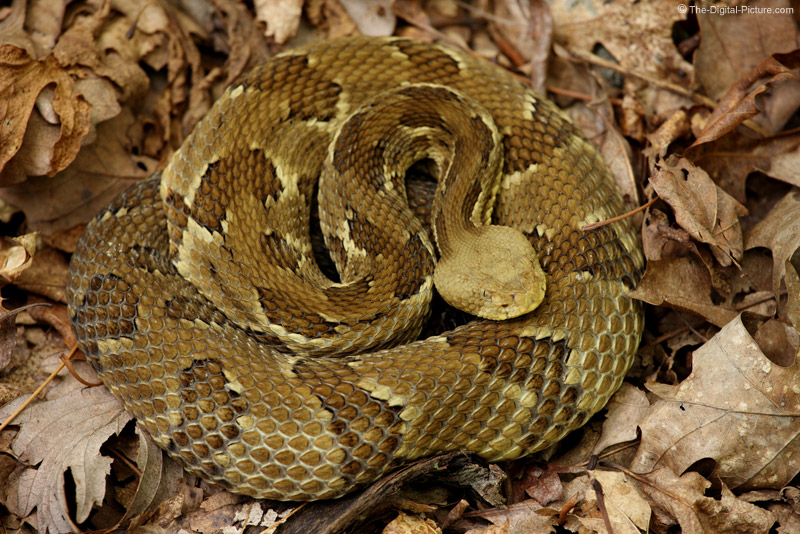 Because keeping the site going consumes such a huge amount of time, I'm very frequently including work with family - and family outings. On this day, we were going "mountain biking" (testing the Zeiss 21mm ZE Distagon Lens actually) on the Rails-to-Trails near Weikert, PA.

As we pulled into the parking area, I suggested we hike a short distance into the open woods to scout photo ops - I mean ... to scout Penn's Creek for swimming opportunities. As we entered the woods, I reminded the kids that they HAD to be able to see where they were walking as rattlesnakes were known to be in the area. Within 3 minutes, my middle daughter let out an excited/panic "RATTLESNAKE".

Of course, I had the 70-200mm f/4 L IS nearby in the SUV and quickly went to work. The pit viper was high on my list of wanted photographs and this one was very cooperative.

The snake was initially under a large tree branch, so I took a set of shots prior to potentially disrupting the situation. I then carefully removed the branch and took some more shots (more insurance shots). I then (using a stick) removed a leaf partly blocking the snake near its head. More good news - the 4' Timber Rattlesnake posed very nicely.

Acting fast (didn't know how long the snake would remain in a good photo position), I opted to shoot handheld in this full shade location. Image stabilization allowed me to shoot at a still-high-quality ISO 400 while having a decent f/8 aperture (for DOF) - while standing on unstable rocks.

Once again, the kids had a great experience learning about nature (yes, they know what a rattlesnake sounds like now) and I got my shot. And we had a great bike ride through a beautiful part of this state. A win/win day as usual.