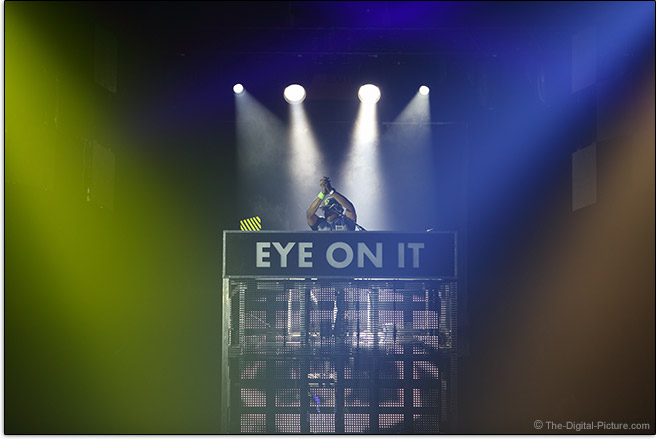 I'm sure that many of you are at least a little surprised to find me writing on this topic. I only infrequently shoot rock concerts, but I like music and jumped on a recent opportunity to shoot a sold-out 15,000 seat concert event for the organizer. Perhaps the very long, intense shoot, long drive and 2:00 AM bedtime did something to my mind, but ... here is a collection of my tips and musings:

Rock concerts are not created for photographers (though I of course think they should be and have many suggestions for the next event).

Just because you have a media pass, doesn't mean you get to hang out at stage front for the entire concert (only for the first 2 songs per set for this event).

Just because you can shoot in the bike rack (portable fencing creating a buffer between the crowd and the stage) doesn't mean you have full access. You get to share that space with the video people (who have priority) and other photographers.

There is not much room inside the bike rack – especially after people push it toward the stage.

When not shooting in the rack, you may have complete access to the entire bowl (arena). But, that doesn't mean that there are good locations to shoot from. You would probably have a better shooting position from a good seat. 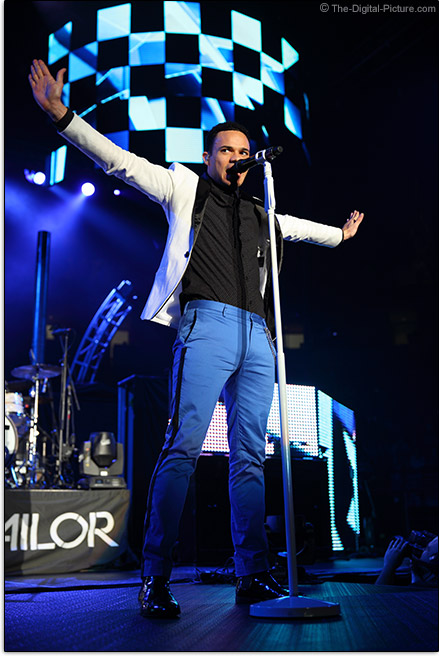 People are the primary subjects at a rock concert – people move (sometimes a lot, often quickly), people blink, people make strange faces – especially when they are singing/performing. You (and the artists) both want them to look their best. You are going to throw away MANY shots for reasons such as those just mentioned. Overshoot – a lot.

The people are usually on elevated stages – to be more-easily seen. You are probably shooting from 5' below them. Being close to the stage gives you the worst shooting angle for people – nearly straight up. Fortunately, their nostrils are usually heavily shaded.

Mics and mic stands put undesirable shadows on faces – or even worse, get in the way of faces. Mics work best when used in front of the face. Faces are typically also lit from the front. Thus, shadows are a problem. At least the artist will likely stay in place when using a mic stand.

Performers will look away from you – most of the time.

Rock concerts are typically highly creative events – be creative in your capturing of it. Your white balance will likely be also-creative as the lighting color can vary wildly – from second to second. Shoot in your camera's high speed continuous shooting mode. Full-spectrum white light is often not considered creative by the entertainment industry.

Light levels at a concert are often completely different – from second to second. AE is challenged in the dark environment. When the spot light hits directly into your lens, your lens will show is flare-proneness, the strongest (I mean most-creative) lens flare it is capable of.

Keeping a large fire/explosion and the performers properly exposed at the same time – good luck with that. Using M mode with Auto ISO resulted in ISO values jumping from 100 to ISO 8000 in less than 1 second.

Fire is hot – especially when it is immediately in front of you. Adding Nomex to my checklist.

Stages are big – and it doesn't take a performer long to cover the entire set. Zoom lenses rule for framing speed. Stages, or at least portions of them, are usually very dark. Prime lenses rule for wide apertures. Keeping fast and erratic moving subjects within the shallow, wider-than-f/2.8 DOF: a challenge. Shutter speeds of up to 1/800 were not fast enough on occasion.

Shooting immediately in front of 5' high woofers allows one to experience CPR firsthand – without being touched by anyone.

When told to go to an office that is not a formal venue office, find out what that office's venue gate letter is. This prevents parking staff from directing you to the opposite side of the arena. This advice is especially helpful when you decide to leave your coat in the car and it is 20° F outside (and windy).

It helps to appreciate the music being played, but you are focused on what you are doing that you really don't pay close attention to it. The necessary earplugs also affect your musical experience.

I did not need to use my DSLR's Silent Mode at this event.

I want a smoke machine for my studio. 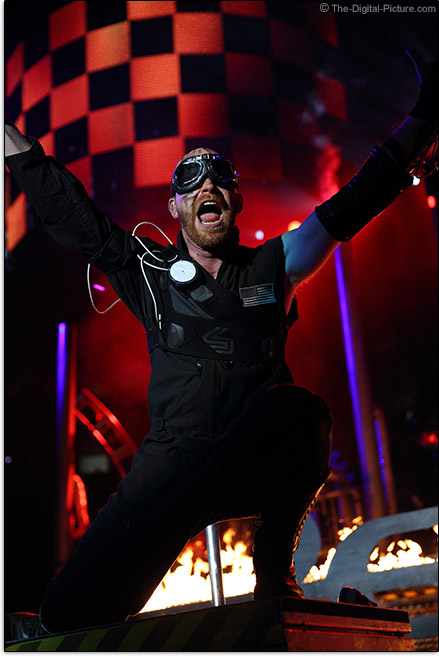 Don't worry – I'll get more sleep before writing the next review. :) 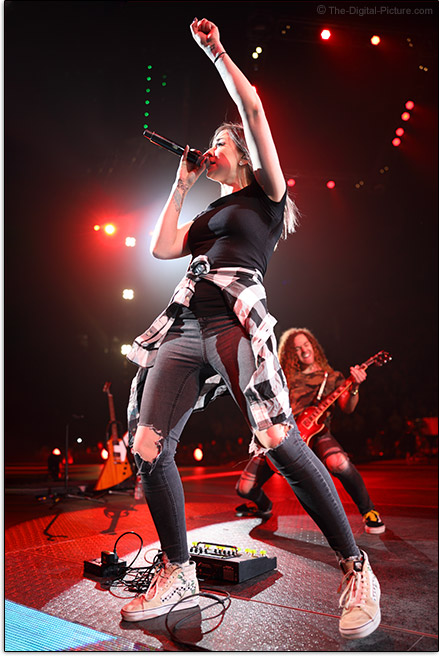 Fast forward half a dozen years and I found myself with credentialed access to a 4 hour concert in the same 15,000-seat indoor stadium. This time it seemed like the perfect opportunity to give the Canon EOS R and Canon RF 28-70mm f/2L USM Lens a workout — while the mostly high-energy performers also got a workout.

The spot lights happened to be on the singer (Ledger) in this image, allowing a very clean ISO 800 with a shutter speed adequate to stop most of the motion at f/2. Other images were captured at ISO settings as high as 6400 where the 1-stop advantage this zoom lens has over most other zooms makes a considerably bigger difference in image quality.

At concerts, the location of the action is often unpredictable and changing fast and that means focal length changes are required, ideally fitting for a zoom lens. Yes, some prime lenses could have given me another 1-stop lower ISO setting, but I would have minimally needed multiple cameras to cover the same range and often the performers were moving so fast that the shot would have been long gone by the time the cameras were swapped. Shooting wider and cropping later is an option, but lower resolution images are the result.

Also great for fast moving subjects was the R's touch and drag AF. With the left hand adjusting the focal length and the right thumb moving the focus point as needed for ideal framing, the EOS R was an ideal choice.

Every shoot teaches new lessons and here are a few concert photography tips from that night.

First, if photographing with a media pass, know without a doubt which gate you are supposed to enter through and be ready to politely ask for a additional opinions when the first person(s) thinks they know the different gate you are required to enter through (sub note: read your notes from the prior event before attending the next event). This saves walking half way around a stadium to the shipping and receiving area and waiting for a security guard to make a series of phone calls to figure out what you already knew and send you back to the other side of the stadium. If opting to ignore this advice, strongly consider arriving at least 1 hour early.

Also if photographing with a media pass, make sure that you have a signed copy of that pass (minimally on your phone) with you because the media reps for some reason may not have your name on the list. If offered a label with your name handwritten on it, request a lanyard because your camera strap is going to peel the label off within 10 minutes of your arrival, leaving you without the pass. Minimally attach the label to something that avoids the peel-off risk.

While your media pass may specify where you are supposed to photograph from, the media pass may not have been updated since the 360° stage was implemented. The specified locations may not exist and those working the show may have no clue about the topic or even how to get to the floor from the entrance level. Arrive early enough that if the instructions do not align with reality there is time to figure out where you are permitted to go without negatively impacting the show (it is probably not being performed for you).

Oh, if the tour is promoting a 360° stage, just get a ticket and leave the camera at home. Within seconds, the performer can be a basketball court distance away and even two cameras with zoom complementing lenses are not adequate. Compounding the problem is that you will have backs toward you for at least 270° of the stage.

Such is the concert photography life.