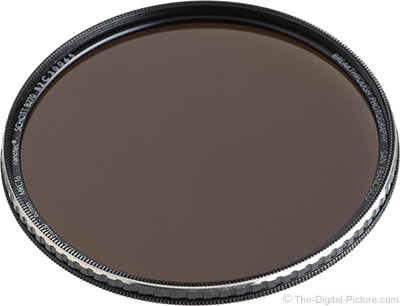 In recent years, we have seen the introduction of high transmission circular polarizer filters and in many cases, having less (about 1-1.5 stops) light blocked by CPL filters is highly-welcomed, decreasing the potential blurring effects of camera and/or subject motion. I quickly added a variety of sizes of the high transmission CPL variants and now use them very frequently. However, I kept my darker CPL filters because, sometimes, blocking up to 2-stops of light is helpful. When photographing certain scenarios, such as moving water or when using a wide aperture in direct sunlight, I often want longer, not shorter, exposures when using CPL filters.

Also frequent is that I need an even longer exposure than what the classic lower-transmission CPL filters provide and stacking a neutral density filter along with a CPL is a common practice for me.

The converse is also true. Frequently when I am using a neutral density filter, I also want the effects of a circular polarizer filter. Until now, I have been stacking these two filter types to gain the combination of effects.

While stacking filters can work, this practice is not optimal for a couple of reasons. One is that stacking, with the increased number of glass surfaces, has the potential to increase flare effects. Another issue is that the increased filter rim thickness of the stacked filters commonly imparts mechanical vignetting at the wider angle focal lengths these filters' effects are commonly desired with. Also, attach two filters and the odds of them becoming stuck together seems to increase substantially.

I said "until now" because the Breakthrough Photography X4 Dark Circular Polarizer Filter combines the benefits of both filter types – in a slim filter size without extra glass surfaces.

The Dark CPL filter is initially available in 3 and 6-stop versions and I'll jump right into an example showing the effect created by the 3-stop version of this filter.

The Breakthrough X4 Dark CPL was a great excuse to "need" to spend a day at Ricketts Glen State Park. The weather conditions were perfect, with a light rain forecast for the entire day. The water flow was strong, promising plenty of water going over the falls. And, it was a weekday which assured fewer people to work around. That leads us to the following comparison example: 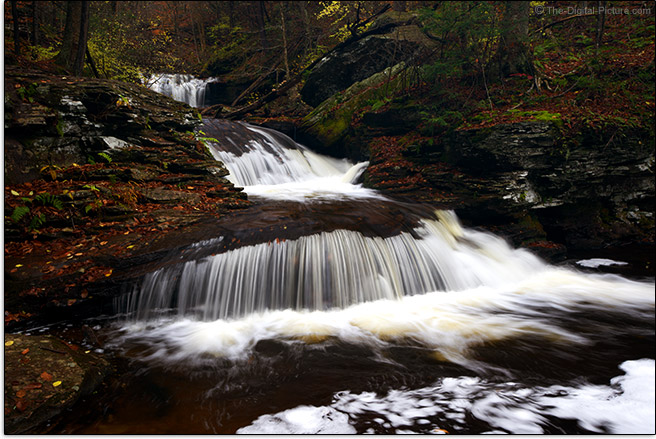 Primarily, a circular polarizer filter cuts glare and reflections, allowing deep, natural colors to show through with strong saturation. A neutral density filter blocks all visible wavelengths of light (ideally) equally, creating a darker image. In the with-filter image above, we see both deep saturation of colors and a more-blurred waterflow, indicating that a longer exposure was used. The with-filter image is my strong preference in this comparison. That improvement came from simply threading this filter on the end of the lens and adjusting it for the maximum effect.

Note that when I first started using this filter, I was seeing a noticeable reduction in contrast in comparisons. I was perplexed as was Graham Clark at Breakthrough. Breakthrough's standard ND and CPL are best-available and there are no contrast issues with those filters. Upon thinking the issue through ... my mind said that darks becoming brighter likely indicated light scatter. A film on the glass surfaces seemed like a potential problem and, after a thorough wet cleaning, the contrast issue completely vanished. The with-filter image above was captured prior to the cleaning and it was processed with contrast added to provide a more-accurate comparison (the sharpness comparison provided later in the review is post-cleaning).

Any filter imparting an effect on an image is not perfectly color-neutral, but some are much closer to being so than others and Breakthrough's success in this area was especially apparent in their X4 10-Stop Black Neutral Density Filter. Fortunately, Breakthrough's color-neutral technology carries over into the X4 Dark Circular Polarizer Filter. 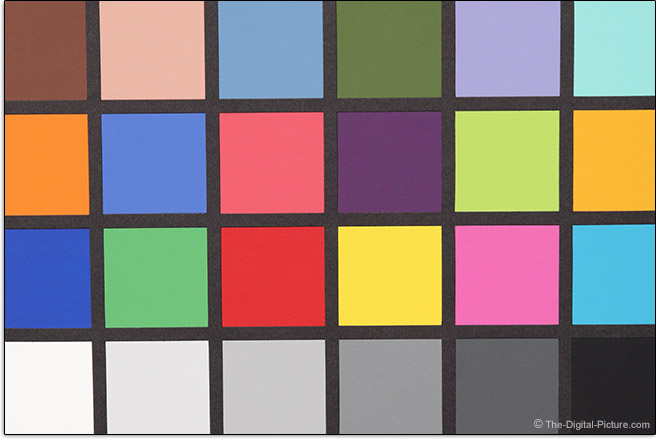 These comparison images were captured under a clear sky within seconds of each other (as fast as I could spin on the filter) using Canon EF 24-70mm f/2.8L II USM Lens in front of a Canon EOS 5Ds R. While the polarizer effect cannot be turned off (affecting the results slightly), the with-filter colors are impressively close to the control example. Also notable is that the above images were captured with an as-advertised exactly three stop shutter speed difference, 1/125 vs. 1/1000.

Add a layer of glass in front of a lens and flare impact becomes an important issue to look at. For a worst-case flare light source, I put the sun in the frame. 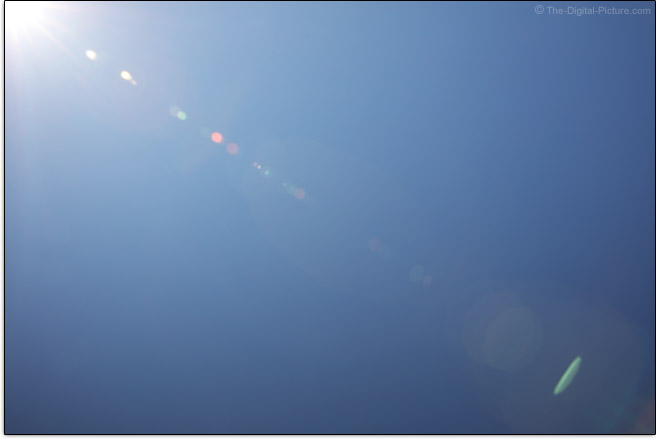 Again, the polarizer feature can affect the look of the with-filter image, but only a few additional tiny flare spots are noticeable in the with-filter sample. Few are going to care about this difference.

Positive is that indication of the filter increasing vignetting of any variety is absent in the above comparison.

Does the filter affect image sharpness? I was looking at that attribute also. 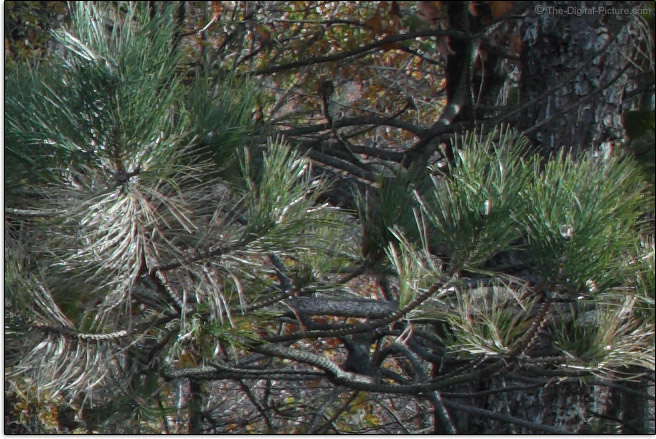 In the first example, the filter was adjusted to minimize the polarizer effects and the last example shows those effects maximized. Be careful to separate the filter's effects from the sharpness evaluation as reflections being reduced can give the false appearance of lower contrast with a less-sharp appearance. Made most obvious in the first two examples is that this filter does not impact the lens' native sharpness.

My overall conclusion is that this filter is optically superb and I have no hesitation using it for even my most important work.

"We took all we learned from the success of the X4 ND and designed an entirely new circular polarizing frame, unlike you’ve ever seen before." [Breakthrough] 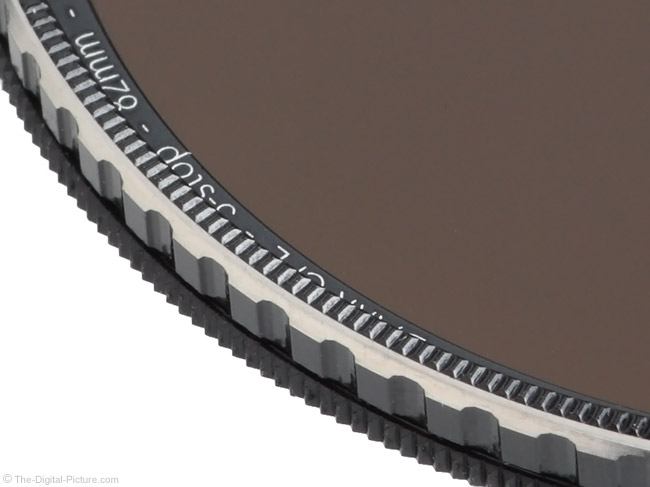 A problem with slim circular polarizer filters is often that the extremely slim fixed rim in the back of the filter is hard to grasp for removal (filters seem to never have a problem getting tight). On the X4 frame, the diameter of the fixed rim is slightly wider than that of the front rotating polarizer adjustment rim and also protrudes from the lens slightly. This means that the filter can be easily grasped for installation and removal.

I used this filter on a variety of lenses with no issues, but the wide base rim proved incompatible with (only) the Sony 16-35mm f/2.8 GM Lens' hood. Breakthrough has indicated that they will have this issue resolved very soon.

Another interesting X4 ring design choice is the use of titanium instead of the common aluminum and brass alloys, making it both lighter and stronger.

CPL and ND filters are most-often used outdoors and this one is " ... built to withstand extreme wind, salt water, dust and other abrasive conditions and elements where other filters may fail." [Breakthrough] Check that box.

"The X4 CPL features SCHOTT Superwhite B270 optical glass, which is an ultra clear crown glass. It is produced by melting high purity raw materials and then made using the continuous draw process. The result is excellent transmission in the ultraviolet, visible, and infrared spectrums, and a high surface quality that accepts our state-of-the-art MRC and nanotec coatings exceptionally well. Our state-of-the-art multi-resistant coating (MRC) is an optical coating applied to both surfaces of the glass disk to reduce reflection and to increase surface durability. Our proprietary MRC coating is structurally harder than the glass itself and the reduced reflections improve the efficiency since less light is lost. The reduction of reflections also improves the contrast of the image by elimination of stray light. The real world result? Better contrast and color."

If you have not had the privilege of using the latest nano-coated filters, you will greatly appreciate them, especially when you attempt to clean them. While photographing at Rickett's Glen, I was having water drops consistently splashing on the filter (and raindrops were also landing on it). Such drops are especially obvious in wide angle, narrow aperture images and removing them in post processing is often very challenging or sometimes realistically impossible. I simply kept a Giottos Rocket Air Blower handy and just prior to each photo capture, I easily blew any accumulated drops off of the filter. Otherwise, cleaning the filter is also made much easier with this coating.

Breakthrough X4 Dark CPL filters are available in a wide range of thread sizes and arrive in a plastic filter box inside a classy white rigid cardboard box with a logo'd red lens cloth additionally included. The early-production filter model I tested fits tightly in the plastic box, but that minor issue will likely be changed with the slight design revision expected.

From a stand-behind-the-product perspective, Breakthrough states "... we guarantee each and every X4 CPL to perform with optimal optical clarity and color neutrality for 25 years even in the harshest of conditions." I can live with that one. Breakthrough provided this evaluation filter at no charge.

I use only two kinds of special effects filters: circular polarizer and neutral density. I use these filters frequently and most frequently when I am using one of them, I am also stacking the other on or under it. Like chocolate and peanut butter or (inset your own analogy here if you don't like one of those foods), CPL and ND go great together and together they make beautiful images. Combining the benefits of two must-have filters into a single filter is a great concept and the Breakthrough Photography X4 Dark CPL is simply a great product.

Under many circumstances, the Breakthrough Photography X4 Dark Circular Polarizer Filter will significantly transform the quality of your images.