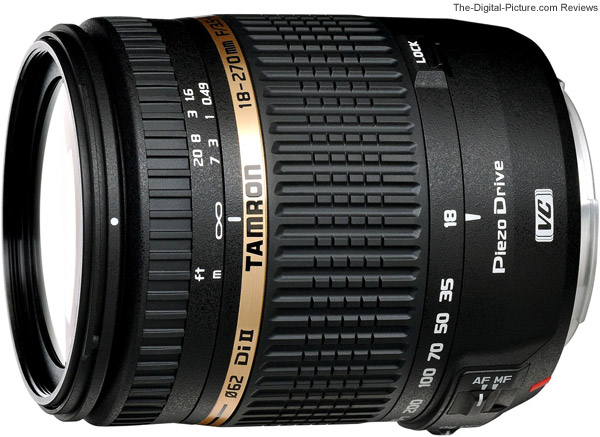 The 18-270mm F/3.5-6.3 Di II VC PZD (Model B008) (referred to below as 18-270mm Di II VC PZD) is an astonishingly light, compact ultra-high-power zoom lens with a filter diameter of 62mm. Weighing in at 450g, this new all-in-one zoom lens is equipped with an AF unit driven by Tamron's new PZD (Piezo Drive)*2, an ultrasonic motor that delivers faster and quieter focusing when the autofocus is engaged.

The 18-270mm Di II VC PZD, will be easy to use and highly portable - a high-power zoom that will offer the user the versatility to shoot in a variety of situations. Its wide zoom range of 18-270mm positions the lens as an all-purpose workhorse for any photographic situation.

1. The 18-270mm Di II VC PZD boasts the world's highest zoom range at 15x magnification for a lens with its compact size and light weight*1, with the added value of Tamron's proprietary VC (Vibration Compensation) image stabilization. At 450g, measuring 88mm in length (from mount face to the tip of the lens), and 74.4mm in diameter with a filter diameter of 62mm, it's a compact and easy-to-carry lens.

2. Silent, high-speed autofocus in a compact lens due to the incorporation of Tamron's new PZD (Piezo Drive) *2 autofocus technology.

3. This lens has a minimum focusing distance of 0.49m throughout the zoom range and a maximum magnification ratio of 1:3.8.

(*2) PZD (Piezo Drive) is a standing wave ultrasonic motor system developed by Tamron. The motor is faster and quieter than DC motors when the AF drive is operated, and compared with ring type ultrasonic motors, it has an actuator that facilitates lens design and reduced size.

A standing wave ultrasonic motor utilizes high-frequency voltage to extend and turn the piezoelectric (piezoceramic) element, thus moving the entire element in a standing wave movement. The metal tip is the contact point of the element to the rotor, and moves in an elliptic motion from the swiveling motion of the moving element, and the friction from this motion turns the rotor. Standing wave ultrasonic motors have the distinct advantage of being smaller than their traveling wave counterparts, and therefore allow a more compact SLR lens size.

Tamron's original VC image stabilization mechanism utilized a moving magnet system whereby a heavy magnet was positioned near the moving VC lens element. In the new VC unit the positions of the magnet and the coil are reversed, because of this the VC optical lens element is attached to the coil. The new VC mechanism employs a moving coil mechanism with a lightweight coil, and the lighter coil reduces the load on the drive system. Thus, the lighter, more compact new VC unit contributes to the lens's overall light weight and compact size.

*Coupler system refers to a system that uses a shaft to harness the AF motor built into the camera body to operate the lens.