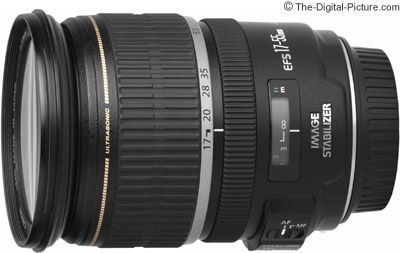 To improve image clarity over the total image area, two Ultra-Low Dispersion glass (UD) elements are employed to eliminate secondary chromatic aberrations that otherwise reduce sharpness and introduce colour fringing. To ensure crisp, high contrast from one corner of the frame to the other, two aspherical lens elements have been introduced to avoid spherical aberrations that can soften images, especially at wider apertures. In combination with digital EOS CMOS sensor and DIGIC II image processor technologies, the EF-S 17-55mm f/2.8 IS USM delivers image quality surpassing that required for many commercial applications.

Superb optical quality with no change in aperture over the full focal length range allows photographers to set exposure at the widest aperture and concentrate on framing, without concern for adjusting shutter speed at longer focal lengths. The lens employs an almost perfectly circular barrel aperture, helping create attractive, even background blur.

The lens features Canon’s latest 3-stop Image Stabilizer (IS) for dramatically reduced image blur caused by camera shake. IS significantly extends scope for shooting in low light conditions without flash, or for gaining depth of field. The 3-stop advantage allows a photographer shooting in low light to use a shutter speed of just 1/15 sec instead of 1/125, with no perceptible increase in image blur.

IS automatically detects when the camera is mounted on a tripod, thus preventing feedback loops between the IS sensor and stabilizer motor vibrations.

The lens’ USM motor employs ultrasonic frequency vibrations to drive auto focus with speed and near-silent operation. The constant torque motor moves the focus group at high speed, stopping with precision, accuracy and without overshoot the instant the lens arrives at the correct focus point. Photographers can switch to manual focus instantly and at any time simply by moving the manual focus ring without first having to switch out of auto focus mode.

When used in conjunction with Canon’s range of EX Speedlite flash units and the internal flash of the EOS 350D, EOS 20D and new EOS 30D, the lens passes distance information to the E-TTL II flash algorithm to improve flash exposure metering.

An optional lens hood, made exclusively for the EF-S 17-55mm f/2.8 IS USM, and pouch are available.

In keeping with Canon’s Kyosei philosophy of living in harmony with the environment, the lens features only lead-free glass.

The compact APS-C size sensor of select EOS cameras such as the EOS 30D, EOS 20D, EOS 350D and EOS 300D has paved the way for a range of relatively compact and lightweight EF-S mount lenses. These lenses project a smaller image circle than would otherwise be necessary to cover a full frame sensor or a frame of 35mm film. The ‘S’ in the EF-S nomenclature stands for the term ‘Small image circle’. This describes the system that allows for both a smaller image circle and positioning of the rear lens element closer than normal to the camera’s sensor.

IS works by using gyro sensors and circuitry to detect and measure unwanted vibrations. Tiny servo motors then create corresponding movement of a correcting lens group perpendicular to the optical axis. This alters the light path, returning the image to its correct position on the sensor or film plane. Unwanted movement is corrected fast enough to suppress effectively the vibrations of moving vehicles and aircraft such as helicopters.


Rent the Canon EF-S 17-55mm f/2.8 IS USM Lens
LensRentals.com
LensProToGo
(Using these links for your rental supports this site)