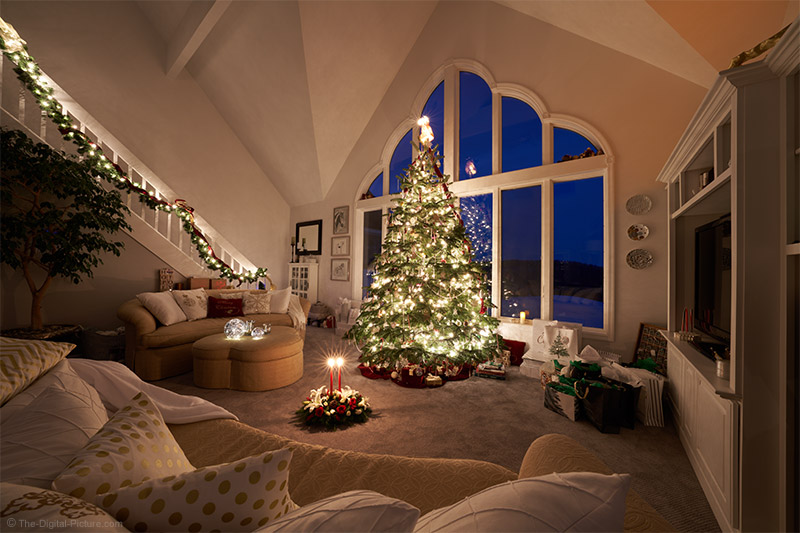 The annual Christmas tree photo session was late this year, but ... I'll take satisfaction that it happened before Christmas.

Our space calls for an ultra-wide-angle focal length, and a wide max aperture lens typically makes the starburst effect from individual lights pronounced at narrow apertures. Last year, the impressive Canon RF 15-35mm F2.8 L IS USM Lens got the call for this job. Another impressive lens, the Sony FE 12-24mm f/2.8 GM, was a recent addition to the kit and a perfect choice for this year. That lens choice made the Sony a7R IV the easy camera choice.

When shooting the same scene every year, the composition selection tends to become established, and I didn't get too creative this year vs. last year, choosing again to utilize the wall unit as a right-side frame to the full room scene. The straight vertical lines of the wall unit lead me to a level (for pitch and roll) camera as those lines need to be straight along the edge of the frame (or they can be angled enough to appear intentionally so). The leveled camera position then determines the composition.

Note the lack of geometric distortion in this uncorrected 12mm capture.

With the close foreground, this composition requires f/16 for adequate depth of field, and narrow apertures produce larger starbursts. However, f/16 is considerably narrower than the a7R IV's DLA (Diffraction Limited Aperture), meaning that the image becomes very noticeably soft at f/16. Since this lens produces nice starbursts at f/11, I opted for this aperture for the base image and composited the closest subjects and the candle starbursts from an f/16 image via layers in Photoshop. Otherwise, this image is right out of the camera.

With that, another Christmas tree photo is in the archives.