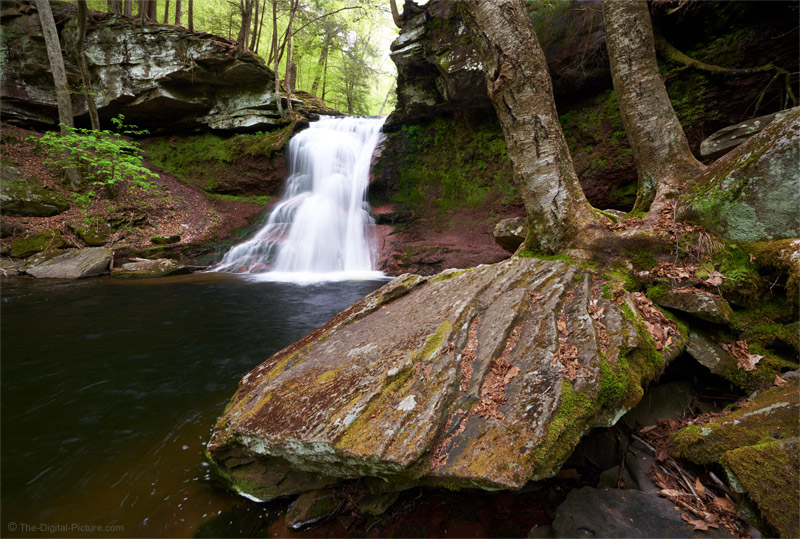 Much is said about using photography to tell stories, but another great aspect of photography is creating stories. I'm not talking about deceptive reporting and the like, but setting the goal to be photos, and enjoying an adventure unfolding, the story, while capturing them.

There was an exceptionally long off-trail hike in north-central PA involving a couple of deep canyons and lots of waterfalls that I had been planning to take for a long time. The schedule for this spring looked favorable for making that adventure happen, and I selected what appeared to be the perfect waterfall photography day. The weather forecast indicated full cloud cover and some light rain could be expected.

Then my youngest daughter asked if she could go along, and after my enthusiastic, positive response, I was then asked if three of her friends could also come along. After warning them over the duration and exertion this hike entailed, all were set on going. All four of the girls were distance runners, so I expected they were physically up to the hike. They were advised to bring the appropriate gear and supplies for an entire day that could include rain, and I welcomed the additions to the adventure.

We arrived at the start location late in the morning, and a beautiful waterfall greeted us a short distance into the forest. I hurriedly set up the camera (four girls were waiting for me), established the right settings, and captured some nice images. We then bushwhacked, rock-hopped (including creek crossings), and hung on the side of very steep terrain for, according to my daughter's Garmin watch, three miles until we arrived at another impressive waterfall. I captured more images, and we ate lunch.

That was the last time the camera came out of my MindShift Gear BackLight 26L. The rain started and quickly exceeding the forecasted slight-chance volume. The sky became very dark, and the rain didn't relent until it was nearly dark out.

Waterfalls require a cliff for the water to fall over, large falls require big cliffs and the falls that we continued to encounter had larger-than-needed cliffs. Getting around waterfalls meant moving downstream a distance until the wet sides were climbable (without ropes). How steep were the canyons, and how much time did we spend on them? At the end of the adventure, the girls were complaining that their arms hurt more than their legs, a sure sign that a good adventure happened.

At about 8 miles into the hike, a key landmark was missing. I had spent hours researching the hike, but this missing landmark was a key to finishing the hike as planned. There was no signal to locate ourselves via a smartphone, so I relied on a previously downloaded topographic map and a conventional compass to continue our route. While I knew we wanted to go east, I was not precisely sure how far north we had traveled. If I didn't guess correctly, we could miss the canyon we needed to find. Hedging enough to be safe, we walked southwest across the vast, densely forested, flat mountaintop. Note that walking through such terrain under a cloudy sky without a navigational aid is a sure way to get lost.

About 2 miles into the compass-directed portion of the dark and rainy adventure, the girls were becoming nervous, and one member of our team was staying immediately behind me. Eventually, we encountered a swampy area with a little flowing water, and I relented to traveling due east following that flow as the water had to be going down into the canyon we were hunting.

After a considerable distance down the steep mountain, we arrived at the targeted creek. While there was some relief among our group, deep, forested canyons are dark, and the what if we don't make it out before dark question began to be raised — repeatedly. I assured the group that we would light up the dark (I like the Black Diamond Spot 325 Headlamp BTW), and that we had the supplies necessary to make it out.

Still, the challenge of hiking the sides of the waterfall canyons increased while the light levels decreased. Finally, I declared that everyone had to begin wading across the streams. Yes, building rock bridges was fun, but it was time-consuming, and darkness was approaching.

Amazingly, we arrived back at the first waterfall at the precise time I had guessed to the group to expect to return. My distance estimate was not quite as accurate, with the Garmin indicating 13.1 miles of distance with 3,500' (1.07 km) in elevation change. The excitement brought on by the accomplishment and relief hitting the girls simultaneously made the adventure worthwhile, and all were ready to sign up for the next adventure. Interesting is that the next day their arms were sorer than their legs — due to holding onto trees and rocks while navigating the steep terrain.

No girls were harmed in the creation of this image, but photographically, the adventure was not so productive, with most of the waterfalls being from the sky. However, I know where some great images are, and will likely return for at least a partial repeat hike.

What will your story be? Use photography as a purpose for creating a story!

Here is one of the last photos I captured on this journey: Girl on a Waterfall Adventure.