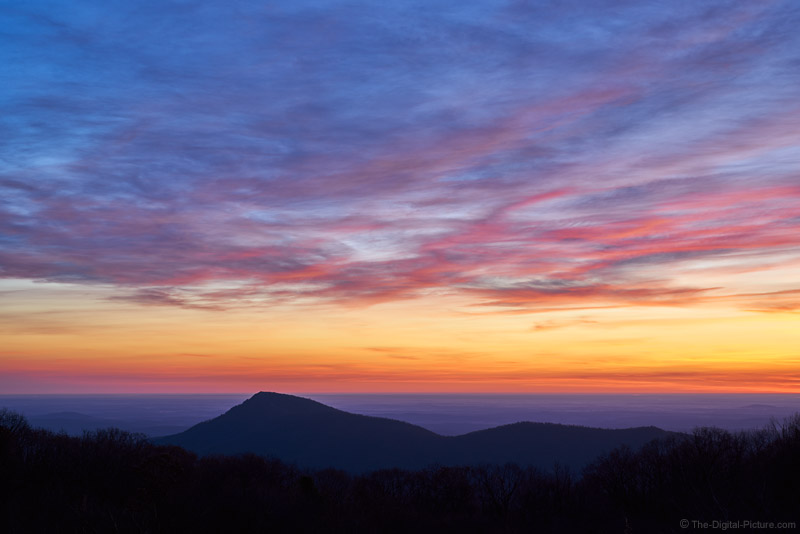 Just another stellar Shenandoah National Park sunrise and being there was the hardest part of capturing this image (being there was not hard either).

This is single exposure image (not an HDR) captured with the red channel being nearly blown on the histogram. At that brightness, this just-before-sunrise scene provided adequate detail in the shadows for Capture One to brighten them while darkening the highlights slightly for improved balance. The f/8 aperture maximized sharpness, minimized peripheral shading, and provided very adequate depth of field. ISO 100 was selected for its low noise attributes. Nothing in this scene was in motion except for the very-slow-moving clouds and the 0.4 sec. shutter speed used for the final scene brightness was easily adequate to stop all motion.

Saturation and contrast were added to this image but this sunrise was so dramatic that the amount of both adjustments was only slight. Auto white balance delivered a cool-toned image and warming it slightly proved helpful.

From a composition perspective, the options were limited in this scene. Moving a short distance would not change the scene much and moving a large distance meant the view would be completely obscured. Thus, selecting the right focal length became the primary method for inclusion and exclusion of elements.

Old Rag mountain, the highest peak shown, was my primary subject. I wanted the foreground layer (trees) included as a base for the image and liked the curvature this element showed, partially encircling Old Rag and its trailing mountain range. Keeping this horizon straight seemed obligatory in this case but how high the horizon was in the frame was left for personal preference. The height selected here seemed to create a nice overall balance.

Though this image is uncomplicated, it was one of my favorite Shenandoah National Park landscape images from last fall.