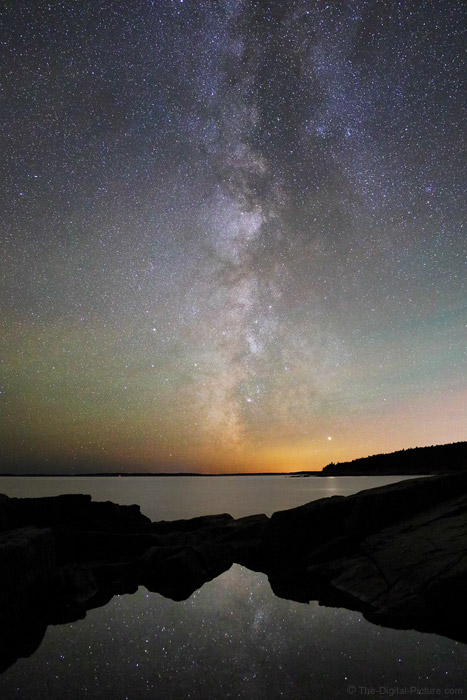 One of my favorite subjects to photograph is the Milky Way. The required long exposures provide plenty of time to simply watch the spectacular sky show (unless I'm running two cameras), taking in the awesomeness, and the pictures captured are usually among my favorites. I was blessed with the opportunity to photograph the Milky Way from several top-notch locations this year, including during the Rocky Mountain National Park and Acadia National Park workshops. The image shared here was captured from the coast of Acadia NP.

Seldom can the reflection of the Milky Way be seen in an ocean as the water movement completely blurs everything during the required long exposure. However, tidal pools are often still and can make great reflectors (though not at high tide) for a variety of coastal photography needs including reflecting the night sky. Adding value to this particular tidal pool was the low surrounding rock with good character, adding jaggedness to the rock line and its reflection.

To photograph the night sky, I usually want a wide-angle lens with an f/2.8 or wider aperture available with sharp wide-open image quality. The Canon RF 24-70mm F2.8 L IS USM Lens, with an EOS R behind it and a Really Right Stuff TVC-24L Mk2 Carbon Fiber Tripod and BH-40 Ball Head under it, met those needs superbly.

Photographing the Milky Way is easy and very addicting. This image was captured using the 2-second self-timer feature with settings of f/2.8, 15 seconds (longer exposures increase star trail length), and ISO 6400 (with a low amount of noise reduction applied). I opted to brighten the result a bit in post and brightened the foreground by an additional stop for a single-image HDR. Just after sunset, the sky still had some color in it and a slight saturation increase (+1 in DPP and +7 in PS) made those colors pop. Auto white balance was used. Increasing contrast via an S-curve adjustment always makes the Milky Way stand out.

As I was searching through the over-a-thousand images captured with the RF 24-70, selecting a few to share in the review, this one stood out as my favorite and thus I'm sharing it with you here. Add the RF 24-70mm lens to the list of good night sky lenses.