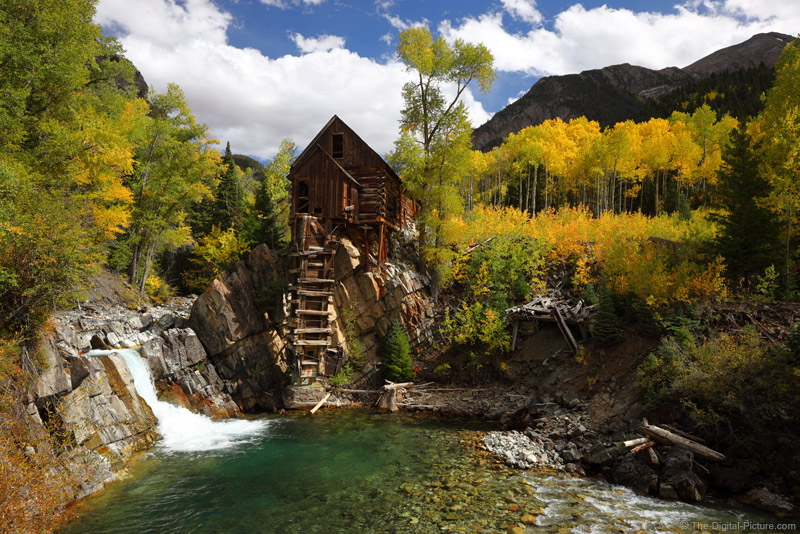 I had attempted to photograph the historic Crystal Mill twice. On the first (not very serious) attempt, a navigational error prevented success. On the second attempt, heavy rains prevailed and even the jeep service would not take me to the mill. With the end of the Rocky Mountain National Park photography workshops aligning with the normal peak fall foliage time in Marble, CO and the airline ticket price home being significantly lower one day later, I opted to make another attempt at photographing this mill and routed the itinerary through Marble one more time. This time, success was achieved.

Getting to this location requires driving a very-rough 4x4 road or a very long hike. My rental Suburban checked the 4x4 box but I was advised that it was questionably long to safely make the trip. Yes, the rental company's damage insurance coverage was in place but I still needed to be able to get to the airport and after driving up the first section of road, I opted to park the SUV in an area just large enough to clear the road. The hike remaining hike was between 4 and 5 miles and quite scenic.

This trek started mid-morning and the mill was reached at around noon. Upon paying the access fee ($10 enables access beyond the cable) and scoping out the available shot locations, it was obvious that the light would be better later in the afternoon (as expected). Also, the crowds were heavy at noon, another unfavorable aspect of photographing at this time of the day. With a very early AM flight scheduled, a very short night at the hotel was promised (about 2.5 hours of sleep) and a nap seemed like a good plan. I hiked past Crystal City, a ghost-town-like area featuring historic rental cabins and a store, and upon finding a sloped rock with my name on it, (sort of) slept for a couple of hours.

Upon returning to the mill, I found the crowds much lighter. The sky had filled with clouds that created an even light and clouds prevailed for most of my remaining time there. I didn't mind the even lighting that the clouds created but the clouds in the background were usually in direct sunlight, creating a huge dynamic range. After shooting many HDR captures, the clouds parted momentarily and I was able to make (only) one single image with direct sunlight hitting the mill while using this camera and lens. The cloudy sky images were nice, but this direct sunlight image was my favorite.

For this hike, I could take two cameras and two lenses in the MindShift Gear BackLight 18L. The Canon EOS R and Canon RF 15-35mm F2.8 L IS USM Lens made the cut and delivered excellently. A Breakthrough circular polarizer filter was used to cut reflections and increase saturation. a Really Right Stuff TVC-24L Mk2 Carbon Fiber Tripod and Really Right Stuff BH-40 Ball Head provided the support for this image.