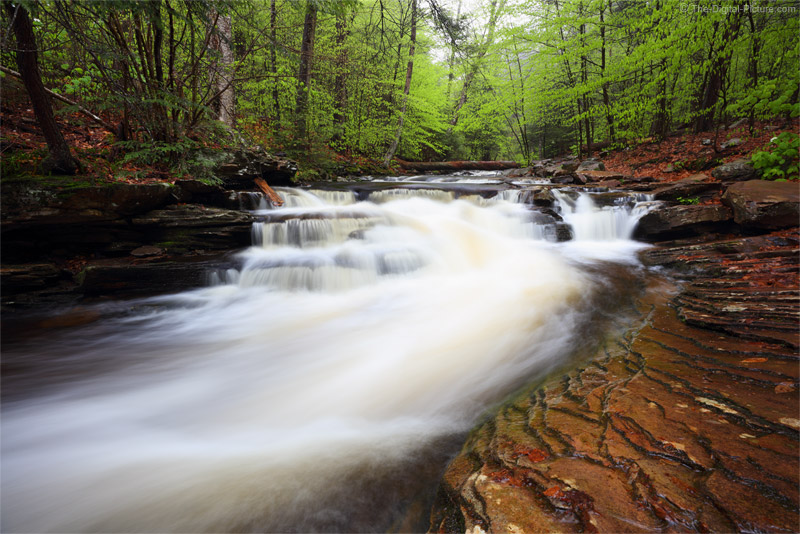 It was just another typical rainy weekday in Ricketts Glen State Park. It was the perfect time to take my favorite ultra-wide-angle zoom lens and landscape camera body, the Canon EF 16-35mm f/2.8L III USM Lens and Canon EOS 5Ds R, for a hike.

I am not aware of this cascade having a name, but I always find it photo-worthy. It is hard to go wrong with a series of lines leading into the bottom of the frame and the leading lines in the rock are the big draw to this location.

Camera height is something a photographer usually has some control over, at least within their physical reach ability or the height of their tripod if such is being used. When photographing flat water (pond, lake, ocean, slow-moving river, etc.), a higher camera position will often provide a higher percentage of the frame being filled with water than a lower camera position IF a similar overall scene framing is used. For example, photographing an ocean from a standing position with a level camera will result in far more water percentage in the frame than doing the same while lying down at the edge of the water due to the angle of view across a flat surface. Often, supporting that big IF requires that the camera angle be changed and camera angle also plays a role in determining how much of the frame is filled with water. A downward-tilted camera can include more water than a level camera.

The key is to find the right balance for the scene you are photographing and there may be multiple right answers. Work with a scene until you can find no more camera positions that work well. Then move on.

The small waterfalls seen here do not qualify as flat water, but there is still a lot of near-flat water in this scene. The right balance for this image was using an ultra-wide-angle focal length positioned with enough downward angle to show a significant amount of water and low enough to gain the right perspective to emphasize the foreground rock lines.

I don't always take the time to photograph this cascade, but especially with the wet rock bringing out strong color (saturation aided by a circular polarizer filter), I couldn't resist stopping on this day.