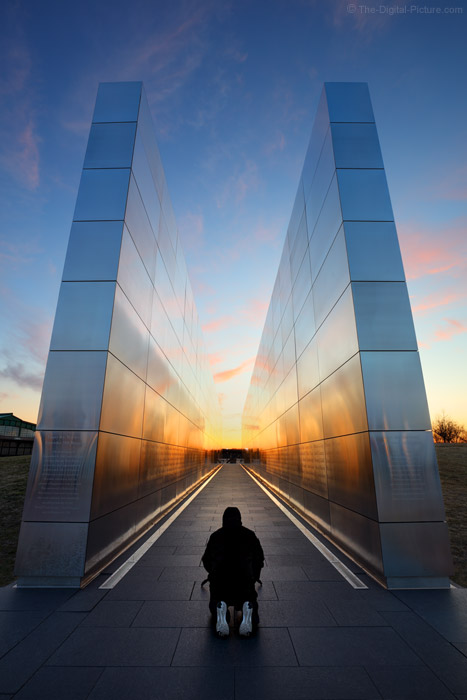 When photographing a symmetrical subject, either take the time and effort to make it perfectly aligned in the frame ... or don't come close to doing so.

Some symmetrical subjects are far more forgiving than others. A tile floor is typically symmetrically unforgiving and note that any geometric distortion in a lens increases the in-camera alignment challenge. Another challenge is slight asymmetry in the subject.

This image appeared ideally aligned in-camera, but it still needed to be adjusted slightly in post-production to finish off that task. I thought I had the image ready to go when Sean mentioned that the monument was not quite perfectly straight. Measuring structure positions in Photoshop made it appear straight with some subject asymmetry showing at the bottom of the monument. A tile was lifted by a noticeable amount on the right side and the left side had stone showing on the outside of the perimeter drain that was not showing on the right, both creating optical illusions of asymmetry. I decided those fixes were needed and made some other adjustments (sometimes these small projects take on a life of their own). After revisiting the image a couple of times, I decided that Sean was still right and adjusted rotation slightly to move the image closer to perfection.

In this image, Abe Curland of B&H is carefully aligning his shot of the Empty Sky Memorial in Liberty State Park, NJ. The lines in tile flooring provide valuable assistance for finding center.