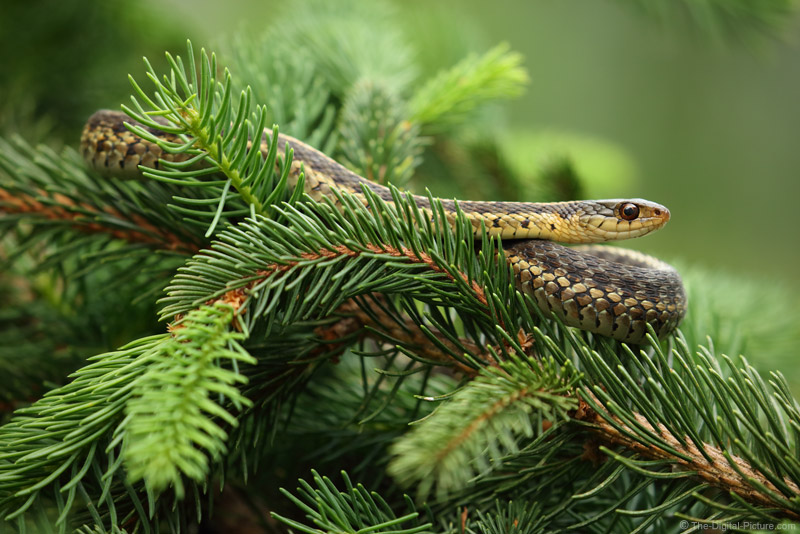 I know, some of you are thinking that snakes are creepy and that putting any thought into photographing them is ... completely wasted effort. Even if that is your thinking, stay with me here as you can likely apply the same thought pattern to a different subject, one that you find more photogenic. If you scroll your browser past the snake image, you even won't have to look at it while reading.

The story starts with me brushing my teeth (you didn't see that one coming, did you?). I looked out the bathroom window and noticed this cute garter snake lying on top of a weeping spruce tree. While garter snakes are common here, they are usually on the ground and are seldom cooperative. So, it is unusual to have the opportunity to photograph them in such a nice environment.

The weather was perfect for this opportunity. It was a very cloudy day, meaning that I had soft light to work with and the camera angle decision was not going to be light-driven. After checking to be sure that I could approach at least reasonably close to the snake without it being immediately frightened away, I decided to move forward with an attempt at photographing it.

There was no action involved here, so the frame rate didn't matter and the Canon EOS 5Ds R is nearly always my preference in such situations. For lenses, I observed that I had a limited working distance and I knew that getting too close would send the snake looking for a safer location. Interpretation: I needed a telephoto focal length, but not the longest available.

I quickly narrowed my choices down to the Canon EF 100mm f/2.8L IS USM Macro Lens and the Canon EF 100-400mm f/4.5-5.6L IS II USM Lens. I decided that the snake would not likely tolerate me being close enough for the macro lens' close-focusing advantage to be a benefit over the 100-400 L II's already very good maximum magnification ability and I wanted to be able to adjust my framing to the positions I was able to get into along with the scene available at that perspective. Basically, I'm saying that a zoom range was preferable. The macro lens' wider aperture would allow me to create a stronger background blur at 100mm, but the 100-400 easily wins the background blur contest overall due to its much longer 400mm focal length and the longer focal length provides a longer working distance at its maximum magnification. I mounted the 100-400 and began working with the scenario available to me.

Using a tripod was going to be too great of a challenge due to the in-the-tree location of the snake. Thus, handholding was going to be optimal and image stabilization was once again proved highly valuable.

The lighting was relatively constant, but it was changing with enough frequency to make a manual exposure challenging. Also, because I wanted to use a wide open aperture, the variable max aperture of this lens increased the manual exposure challenge. While I still technically used manual exposure mode, I opted to lock in my shutter speed (I was in unstable shooting positions and counting on some assistance from image stabilization) and aperture (I selected f/4.5 with the lens at 100mm and let it auto-adjust to the max available at longer focal lengths) with Auto ISO becoming the auto exposure parameter. Because the colors in the images were relatively neutral, the camera's auto exposure system worked great with the brightest colors, the yellow lines in the snake, being right where I wanted them at the right side of the histogram.

When photographing a potentially-fleeting subject, I quickly capture some good-enough images to have the safety shots on the card. Along with having those safety shots, I can quickly check the exposure and other settings before moving in closer. Upon reviewing these images, I immediately noticed that reflections were impacting color saturation on the snake and that meant a circular polarizer filter would, as it frequently does, provide a significantly improvement in image quality. I slowly backed away from the snake and went back inside to get the filter.

With the filter installed and properly adjusted, I was happier with the results and began to work the composition more seriously, including approaching closer to the snake.

Finding the proper perspective is often the key to creating the best composition and the longer I photograph a subject, the better I can determine what the best perspective is. Moving closer/farther, up/down or around the subject can significantly change the juxtaposition of the subject and its surroundings, significantly changing the resulting image.

To jump start the composition process, I wanted the snake's head to be facing in a direction other than away. That factor eliminates about half of the potential camera positions. A sideways-facing head can work well and a slightly-toward-the-camera angle is usually a great choice. That the snake was on top of the tree removed much of the below-the-subject camera position options.

The background is always a huge key to good composition and using a telephoto focal length is useful in both reducing what remains in the background and blurring what remains into obscurity. I adjusted my position to take in a variety of background colors and textures and also worked my position around the snake to get different angles on the main subject. Eventually I went for a step ladder and tried some downward angle compositions for some variation.

Another compositional opportunity available to me was that, with no discernable horizon or other sense of levelness showing in the frame, I was free to rotate the camera as I desired and that adjustment could change the entire balance of the snake in the frame.

Every so often the snake would move slightly and I was able to work with a modified scenario for a period of time. The snake cooperated for about an hour – long enough for my arms and shoulders to get tired from holding the camera in awkward positions. Then the snake abruptly dropped from sight and it was game-over.

As so often is the case, the 5Ds R and 100-400 L II proved to be the perfect combination for this purpose. With a bit of unexpected rain occurring during this shoot, I was happy for the camera and lens' weather sealing protection, meaning I could simply keep shooting without worry in that regard.

Just an hour of shooting not only gave me some of my best-ever garter snake pictures, but it also provided a great practice session. Simply spending an hour photographing something that interests you around the house can keep your photography skills fresh along with teaching you new ones. So, get out there!