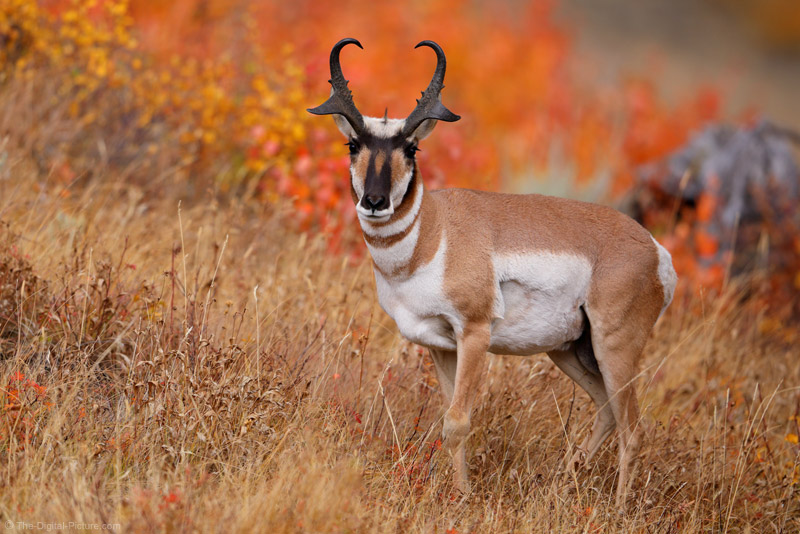 Pronghorn were on my to-photograph list for my time in Grand Teton National Park and I had some success in this pursuit.

Upon arriving at the park, I made a scouting drive around the main loop and then drove through Antelope Flats where a large heard of bison roams and pronghorn are frequently found. In this last section of the drive, a line of short trees in brilliant red and orange fall colors caught my attention. I made a mental note about working these trees into an image, perhaps as a background to a bison or pronghorn portrait.

The next morning, the buck pictured here and I spent some quality time together. It didn't care that I was there and I was mostly moving away from it to maintain my distance. The pronghorn was walking and feeding in what appeared to be a random route. After about 30 minutes and over a mile covered, this buck crossed the road and unbelievably walked right up into the beautiful red and orange trees I had been admiring. I was of course seeing what could unfold in front of me and made sure that I was in place to capture the visualized image.

Pronghorn are most typically seen with grass and sage surroundings, so capturing one in front of fall foliage was unique for me.

The 5D IV's increased resolution over the 5D III was appreciated in this situation. While the entire frame looked nice, I decided that modest cropping would greater-emphasize the beautifully colored animal.

I very much appreciated the 5D IV's fast 7 fps high speed continuous frame rate as I was able to select an image with both good body position and good alignment with the background. The animal was in constant motion, so AI Servo AF mode was selected with a single point selected and held on the eye or base of the horns. I rapidly changed the selected AF point to match the animal's current position (this is often a challenge).

With heavy cloud cover yielding a varying amount of light, a relatively neutral-brightness subject/scene and my focus being on getting a well-framed shot, I gave the camera the job of determining the brightness. Although I utilized the camera's AE capabilities, I still used manual mode so that I could choose the aperture (wide open f/4 for maximum light and background blur) and shutter speed (I adjusted this as needed to keep the subject sharp). The Auto ISO setting took care of the brightness (I adjusted this image +.13 EV in post).

Note that I was using a monopod instead of a tripod in this situation due to the faster setup and height adjustment it afforded as I worked fast while maintaining good position with the pronghorn. The downside of this strategy was the challenge of keeping the animal in the frame due to very strong winds I was shooting in. This large lens catches a lot of wind.

A tripod would have better kept the lens in place and made the job easier (if I could have set it up in time). However, this better support would not have resolved the issue as the tripod head would not have been tightened due to the animal being in constant motion and the wind would have remained an issue. Removing the large lens hood could have helped greatly, but I was shooting in rain some of the time and even the huge hood was not deep enough to keep all of the rain off of the front lens element.

Grand Teton National Park is a very popular photo destination – for more than one good reason. The wildlife is one of those reasons and I was able to check off the pronghorn line item on my to-photograph list during this trip.