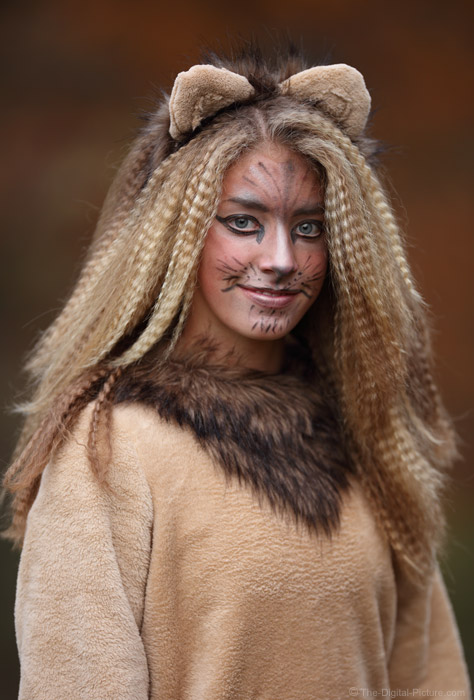 Mikayla (she's 13) decided to make a lion costume. After a week of diligent designing, a run to the craft store, lots of cutting and plenty of sewing, she had a very impressive made-from-scratch full lion costume complete with a stuffed tail that had a curve at the end of it. She created the best lion costume she possibly could and my goal was to capture the fruition of her effort the best I could, creating a memory to cherish for a lifetime.

She finished the costume just in time to wear it Trick-or-Treating. For those unfamiliar with this tradition, the kids spend an evening walking around town wearing costumes and people hand out candy from their front doors. Well in advance, I requested time for a photo session with Mikayla wearing the costume, but ... kids in their most photogenic moments seem to be completed (hair, makeup, etc.) just in time to ... leave for their big event.

I requested 15 minutes notice prior to the photo op (I know, I ask for a lot), got 10 minutes and scrambled to finalize my decision on what the short photo session was going to look like. The amount of remaining daylight was the biggest question I had prior to this moment. It seemed logical that a lion should be outdoors, so I was hoping for some light remaining in the sky and with at least some ambient light, outdoors was the final location selection.

While the leaves were just beyond their peak fall colors, they were still clinging to the trees and had a still-nice color that was indicative of the autumn season. A location that could incorporate this color in the background was the next decision.

I knew that I wanted a blurred background, that I had plenty of working distance available and that I wanted subject framing ranging from environmental to tight headshots. I went with the 200mm focal length as it would work well for those requirements and I went with the Canon EF 200mm f/2L IS lens to maximize the background blur (and to get put the most available light possible onto the sensor).

Lions are known for their nasty predator look and for their roar. Mikayla was acting the part, but since she is a very sweet girl, the nasty-mean lion look made her naturally smile big soon afterward. I still find it a little unsettling to look at the pictures of her roaring, but definitely like the smiles that came afterward. And I like some of the little smiles that came between the two extremes, as seen here.

As planned, I captured a wide variety of poses and subject framing (in the 10 minutes of shooting time I was given). I liked many, but ... her crimped hair acting as the lion's mane "stood out" for me. So, I chose to share a moderately tightly-framed portrait with you.

The mechanics of taking pictures turned out to be an easy part of this series of images, with the ambient light working especially well. I've received a lot of positive comments from friends, with "Those are great photos!" being very common. The subject was of course largely responsible for these responses, but the ability of this lens to strongly blur the fall-colored background, making the subject pop, was another strong contributor to them. This lens, though not inexpensive, can do the same for photos of your own family, or for those for your clients.

The next time you have portraits planned for fall capture, look for trees that can provide a colorful background to your image. The color of the fall foliage should be complementary to your subject's clothing and the colorful trees should not steal the show from the primary subject, but especially when blurred, fall foliage can add a beautiful natural color to portrait backgrounds.