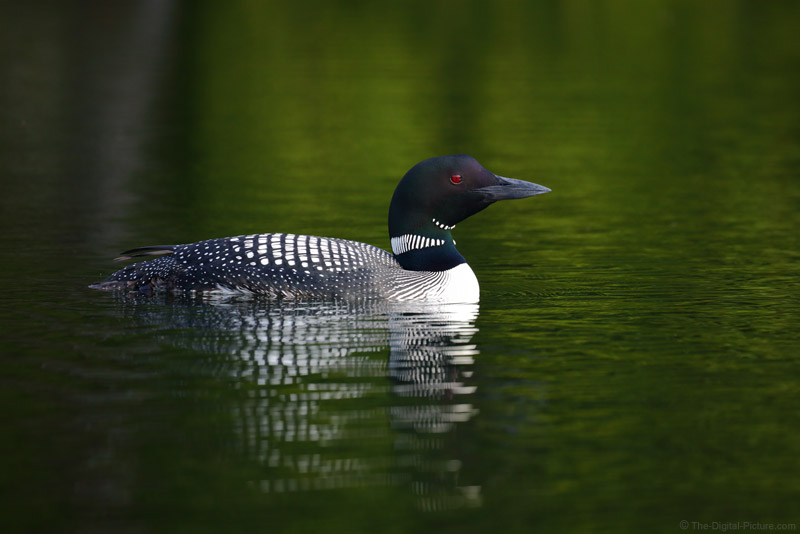 Don't like shooting in the extreme heat and humidity of summer? Be like the birds – migrate! For most of us northern hemisphere residents, the preferred direction is north.

I was recently privileged to do just that, spending a week 26 miles from the grid in the North Maine Woods, just below the Canadian border. The temperature here in late July was very pleasant during my entire stay.

The North Maine Woods are sometimes referred to as the "Silent Woods" by my family, referencing specifically the lack of crickets, cicadas, katydids, etc. making the loud night music we are accustomed to at home. But that declaration is not completely true. Along with some frogs, the clear, eerie call of the loon is a common night sound heard around the silent, pristine northern Maine lakes. It is a sound that I love to hear and a photo of that audio source brings back great memories.

I have photos of common loons, but ... none that stood out to me. I have wanted change that problem on this trip and to do so, I spent just over hour early each of four mornings attempting to photograph these beautiful birds.

My craft was a canoe. Being solo in the canoe with light and changing winds added to the challenge of positioning for the photos. Getting close enough for adequate frame filling while positioning between the loons and the sun all while not concerning the not-too-tame birds was not easy. A light wind being able to rapidly turn the canoe was definitely not helpful.

My case was a Pelican. As it is only fitting to use a case named after a bird while photographing birds, I stored the camera and lenses in a "Pelican" 1510 while in transit between shore and actively photographing the birds. While the Pelican case lacks official approval as a PFD, it floats very nicely in the event of a worst case scenario. There was no worry about water from the paddle dripping on it and no worry about water on the floor of the boat reaching the gear.

The Canon EF 100-400mm L IS II was my Lens choice for these outings. While a 600mm lens would have been more ideal from a focal length perspective (due to the distance that the loons were comfortable with), it would not have been easy to handle this lens in the canoe, especially when alternating between paddling and photographing. The 1.4x behind the 100-400 L II would have also been helpful, but ... that option was not available to me.

The Canon EOS 5Ds R was my camera choice. Having the tremendous resolution of the 5Ds R allowed me to crop deep into the frame with significant pixel dimension remaining. At least 24 megapixels remained in most final images and some required no cropping for a frame-filling loon. Framing loosely had some advantages. For one, the loons were seldom still. And, by sticking one leg straight out the side, loons can change directions 180° almost instantly. That is much faster than I could change the canoe's direction and faster than I could change an AF point to the opposite side. With the center AF point locked on the bird's head, I was ready for any direction change with the bird (often) remaining (relatively) easy to keep entirely in the frame with only slight recomposition needed.

While I cropped the loons rather tightly in most images, being able to go back to the RAW file means that I can open images up if/when more space is needed around the birds such as for titles and text. The background, primarily reflections of the forest with some sky, are beautiful in their own right and in this photo, I especially liked the reflected colors of the forest being hit with early morning light. The white birch tree reflection is another key location identifier to me.

Photo trips such as this one provide extremely educational firsthand experience. One of my take-aways from this loon photography experience is that loons blink a LOT after surfacing into bright sunlight. Once I noticed that behavior, I was careful to time the shutter release with an open eye (and utilized burst mode more frequently).

Crossing this photo off of my bucket list was not a small effort (some might say that I went "loony"), but the pile of keeper-grade loon images I brought home was a bit daunting to sort through. Selecting the one to share with you first was an even bigger challenge. Being in a far north latitude meant that this effort was "no sweat."