Up Close with the Deboullie Mountain Rockslide 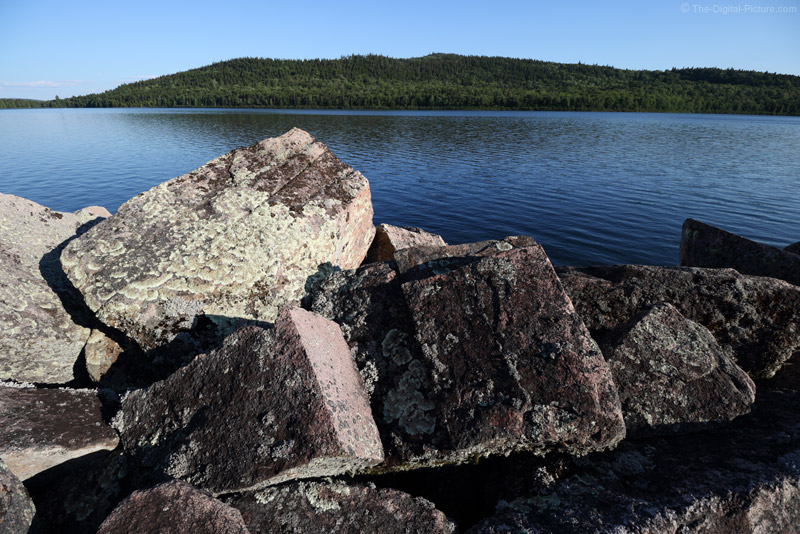 The composition of this image was not very complicated. I zoomed out to 10mm and moved in close to a set of rocks with one having a particularly strong amount of lichen growing on it. I chose the camera elevation to keep the top point of that most-prominent rock within the water background, avoiding additional line intersections and adding to the horizontal layers effect in the upper portion of the frame. I then adjusted the camera distance to fully frame the closest rocks and avoid strong lines of contrast leaving the frame.

Since the sky was clear and blue in color, I didn't need a lot in it in the frame for this particular image. I chose to keep enough sky to yield a clean top border and to add a full layer of blue color over and contrasting with the distant evergreens.

This photo was captured handheld. I used the in-viewfinder electronic level to keep the image properly leveled and captured two frames. One frame was focused closer than the other and the two were manually focus stacked during post processing. Alternatively, a narrower aperture could have been used, but with the clean separation of foreground and background, I chose to use a sharper aperture (f/8 shows less diffraction softening than f/11 or f/16) and the focus stacking technique.

This capture was timed with early evening, resulting in the best possible light quality just prior to the rocks went into full shade. While I frequently use a circular polarizer filter when photographing landscapes, I chose not to in this case. Because the sun was at a relatively low angle to my side and because I was using a wide angle focal length, the sky would have showed strong uneven darkening if this filter was used.