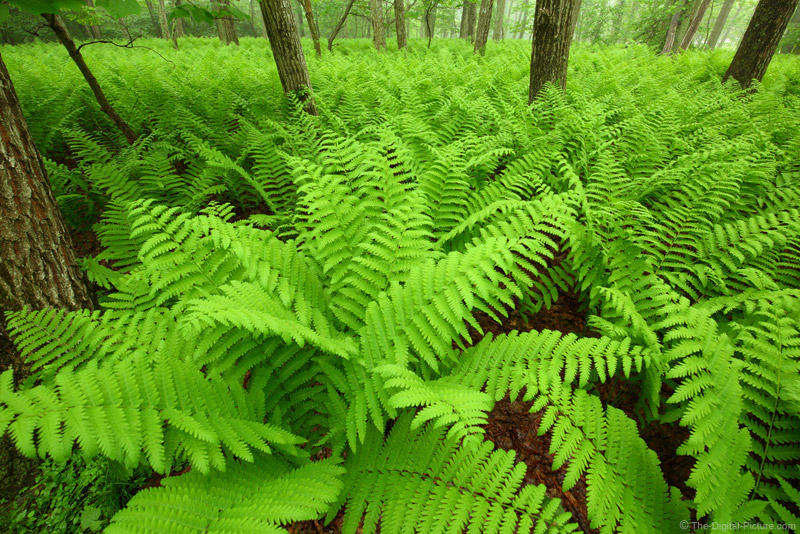 When the fog is present, contrast is significantly decreased and heavy fog can reduce visibility to very short distances. While in Shenandoah National Park for two days in the spring, heavy fog was the only visibility I had. The dozens of turnouts and trails designed to show off spectacular views of the mountains and valleys far below all had the same view. White fog.

When this happens, one option is to find close subjects. With close subjects resulting in less light-scattering fog between the camera and subject, good color and contrast is retained. The large patches of bright green ferns were one such subject that always catches my attention in the spring in Shenandoah National Park. Fog scatters light in all directions, creating very even lighting even deep in the woods.

The one problem remaining was a light breeze. Some of the ferns I was photographing were waist high. With a big sail and a small stem, these ferns moved in even the lightest breeze. I would rather the slight motion blur in the lower left fern blade not be there.

Options for dealing with the subject motion were limited. Embracing the movement and allowing the subject to become blurred is an easy one. Results vary when using this technique.

Waiting for short breaks in the breeze was option I worked on. Taking many shots was another, trying to catch a fern at the end of its motion.

Making shorter shutter speeds available by increasing the ISO setting is another good option. This option results in increased noise in the image, but sometimes a scene can be captured at a low ISO for the stationary subject and then at a higher ISO setting to keep the moving parts stabilized. The two (or more) image can then be stacked during post processing with only the in-motion portion of the frame being shown for the high ISO capture.

Using a narrower aperture offers the same shutter speed advantage with reduction of DOF being the penalty.

A last method I was working with involved placing small temporary Y-shaped twigs at the base of the closest ferns (the ones moving across the most pixels) to help stabilize them. A Wimberley Plamp is a good tool for this purpose.

Remove the light-cutting circular polarizer filter can help establish faster shutter speeds, though this is not often a good choice for landscape photography. While on the fog topic, note that CPL filters very significantly cut through fog. The difference can be very noticeable. Rotate the filter to turn on or off the fog effect, obtaining the look you want.