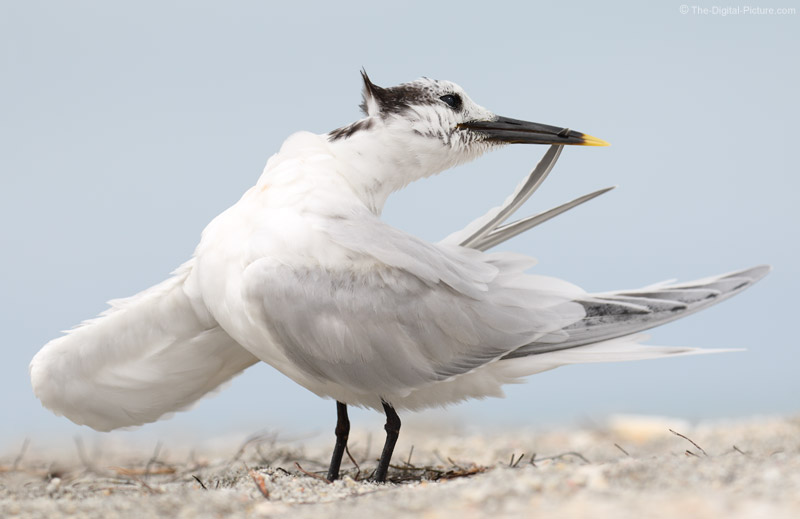 What was the hardest part of this capture?

It was not the exposure. With a solid cloud cover, I was able to lock in a manual exposure for perfect results on every shot. In this case, I chose a 1/1000 shutter speed (the bird was moving a lot and quickly), an f/5.6 aperture (to isolate the bird using shallow depth of field) and ISO 160 to bring the brightest whites up to near RGB 255,255,255.

The challenge was not the tight framing of the bird. I was able to slowly belly-crawl close to the small flock of terns. So close that I only needed a 234mm focal length in front of the 7D II's APS-C sensor. I should have used a slightly wider angle still as I added a small amount of canvas on the left in post, providing additional breathing room for the wing.

The challenge was also not the low shooting position. Using the NatureScapes Skimmer Ground Pod II, I was able to push the camera forward as I crawled in the sand. Shooting from on the ground gave me a clean background (only sky) and the remaining land in the frame is primarily a blur of texture.

The big challenge? Timing the shutter release in conjunction with using the proper AF tactics to get this specific composition with the head included in focus. The sandwich tern cleaning process involved a wide array of moves, few of which I was able to predict and all of them fast. The head was constantly moving in what seemed like all directions and fast framing adjustment with a properly-selected AF point proved very challenging. A narrower aperture would have reduced the AF task, but the result would have been more ground in focus for a different look.

One aspect of this image that I like is the complete separation of the head from the body. Many of the preening positions did not have this attribute (and many had a completely hidden head). I also like the balance. While I don't often place my subject in the center of the frame, I felt that centered worked best in this case. The wing and tail balance the bird over the dark, eye-catching legs. The head extended to the right caused me to want the legs shifted just left of center to get what I felt was the right overall balance. My shooting position was low enough that only the legs intersected the color of the sand. The small amount of feather pulling through the bill is the bonus feature. I'll credit the 7D II's short shutter lag for enabling that timing.

This sandwich tern was on the gulf shores of Captiva Island, just north of Blind Pass. This location in southwest Florida is ideal for expanding one's bird photography portfolio.