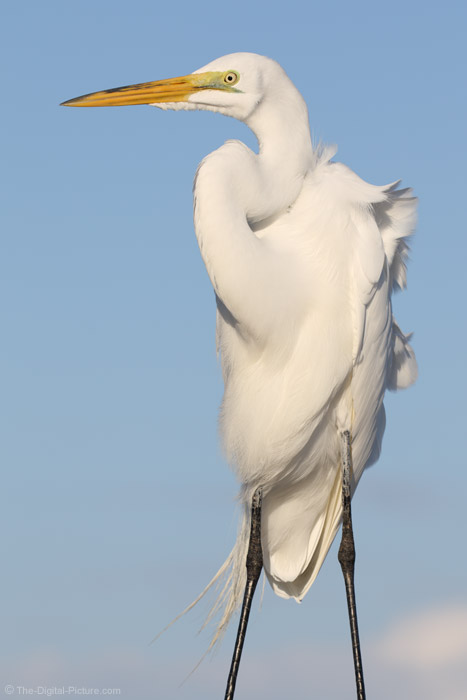 The Canon EOS 7D Mark II, EF 100-400mm L IS II Lens and a great egret make a great combination. With the egret perched above me and the setting sun behind me, the remaining challenge was to catch the constantly moving bird in ideal positions with AF locked on the eye. The camera and lens performed really well on the latter requirement and my own performance on the former was good enough to land me a pile of shots that I like.

What are the ideal subject positions for bird photography? There are many, but side-on to the bird with its head straight forward or turned slightly toward the camera is a basic ideal position. While this bird was directly facing me, that long neck could position the head in a variety of positions and the sideways but turned slightly toward me position worked well in this situation. The gust of wind ruffling the egret's feathers added the extra interest I'm always watching for.

Compositionally, I like the two black legs (leading lines) coming up into the frame, positioning the bird at about 1/3 of the way into the frame. The bird looking into the frame adds the needed balance to the image. Cropping the legs (vs. including the entire legs and feet) in-camera allowed the bird's beautiful body to be larger in the frame and allowed me to avoid the background distractions that lower framing would have included. With the wide zoom range available in this lens, I had a large variety of framing options available and I used many.

The 7D II's top-center AF point was selected and placed on the on the bird's eye. That the 7D II's AF system covers an area that close to the edge of the frame made capturing this particular image very easy relative to the focus and recompose technique most other DSLRs require in this situation. The great egret's long neck was constantly moving the head to new positions and I had only an instant to catch any of these positions. By the time I would have recomposed after focusing, the bird would have been in a new position most of the time.

Though an f/10 aperture used with the 7D II will show some softening due to the effects of diffraction, I wanted as much of the close bird to be in focus as possible. A low sharpness setting of "2" was used in DPP with very light/fine sharpening added in Photoshop CC for a very sharp end result. Even with f/10 selected, I had enough light to use a 1/320 sec shutter speed (though marginal for the moving bird) at ISO 100.

My "great" image is basically straight out of the camera with a small amount of bill cleanup done and white balance cooled slightly as the light was extremely warm at the moment of this capture.