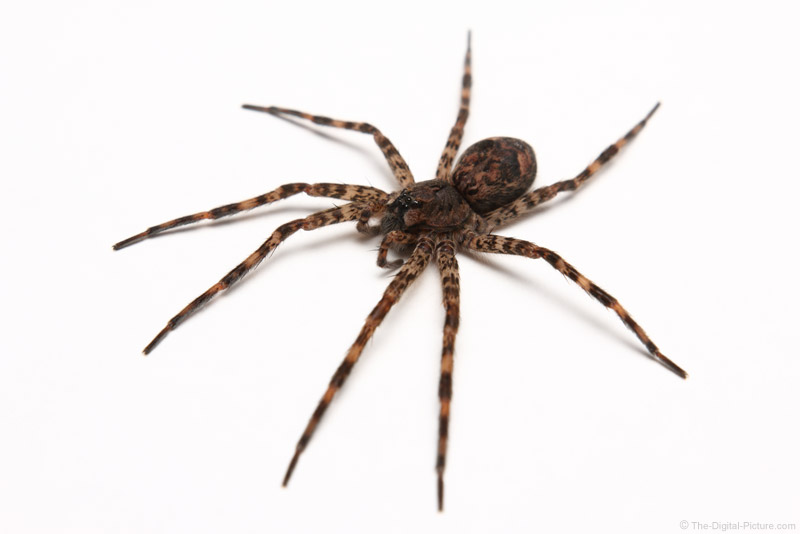 I know – sorry about the creepy subject. Sometimes these situations just fall into my lap. My wife, using her unmistakable slightly panicked voice, called me to our finished basement to eradicate this little monster. Upon arrival on the scene, I decided that the 3.25" (82.5mm) dark fishing spider would make a great subject.

As I said in the review, the Sigma 18-35 has been a great lens to have available for around-the-house use. I grabbed it, a Canon 600EX-RT Speedlight, a Speedlite Transmitter ST-E3 RT and a small softbox and returned to the scene of the home invasion. As I gathered the gear, my stress level was being increased as my wife learned that I had left the hairy creature alive and unattended.

Fortunately, the spider remained findable. Since the carpet was not the background I wanted, I slid a piece of printer paper under it. That was of course much easier to say than to do. I grabbed and arranged two white (to not introduce a reflected color) plastic storage containers to hold the downward-directed softbox above the spider.

The above picture was captured at the 18-35's minimum focus distance. I released the spider outside as the carpet would have needed cleaning if I had squished it as requested. My wife swears that the same spider was back on the window, though outside this time.

Note that the EOS 60D has an integrated Speedlite transmitter and could possibly have fire the remote flash without the ST-E3-RT attached. But, the softbox can get in the way of the transmitter's light, preventing the remote flash from functioning. Radio-fired wireless flash is awesome.