The formula of "1/ (effective [full-frame] focal length)" is likely ingrained in your head and can be recalled and calculated on the fly as you place a camera's viewfinder to your eye. It's a simple formula which has allowed photographers to determine a shutter speed that will negate the effects of camera shake and that formula has served us all very well for many years.

Here's how the traditional formula worked: Let's imagine that you are using a Canon EOS 5D Mark III DSLR paired with an EF 135mm f/2L USM lens. With a full-frame camera and a lens featuring a 135mm focal length, the shutter speed needed to prevent camera shake would be 1/(effective focal length, 1*135), or 1/135 second. As our cameras cannot be set to 1/135, we would typically round that figure to the next fastest 1/3rd stop shutter speed for a final calculation of 1/160 second (though 1/125 second would technically be closer to the calculated result).

If using a crop-sensor camera like the EOS 60D with the same 135mm lens, we would traditionally calculate the full-frame equivalent focal length value. In this scenario, the focal length would need to be multiplied by 1.6 (the crop factor) to obtain our effective focal length. The formula would change to 1/(1.6*135), or 1/216 which would then be rounded to 1/250 second.

But before we plow ahead, we need to clear something up. The "effective focal length multiplier" formula is, by all accounts, an arbitrary value in the camera shake negating formula. In the above scenario, we multiplied the lens' focal length by 1.6 (the crop factor arrived at by comparing the 60D's sensor size to that of a full-frame camera). However, the original problem regarding the need to increase shutter speeds when using a crop-sensor camera had nothing to do with effective focal length of those cameras, but instead was the result crop-camera's higher pixel density sensor. 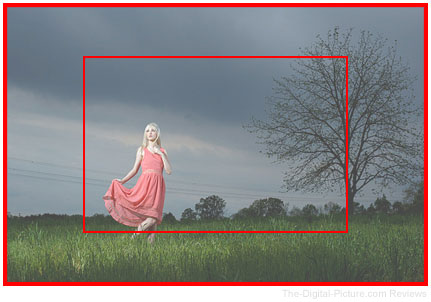 The "effective focal length multiplier" makes perfect sense when discussing relative field of view. A 50mm lens on a crop-sensor camera gives you the field of view as an 80mm lens on a full-frame camera. But as field of view has nothing to do with motion blur, the 1.6x value shouldn't necessarily be tied to the shutter speed formula.

Why did I say "necessarily?" Because at some point in the past, the higher pixel density of crop-sensor cameras meant that a roughly 50% faster shutter speed (compared to the shutter speed required with the same lens used on a full-frame camera) could help a photographer negate the effects of camera shake. I suppose it was around that time that the focal length multiplier became incorrectly associated with the camera shake negation formula. But since that time sensors have become even more dense meaning we're well past the days where the values coincidentally coincided.

Considering the pixel-dense sensors found in a large portion of recently introduced DSLR cameras, the formula we've been using for so long simply doesn't work for calculating a "safe" shutter speed that will eliminate camera shake with these cameras. The formula must be re-evaluated and revised if you are currently using one of Canon's (or Nikon's or Sony's) cameras featuring a pixel-dense sensor.

Notice I used the term "pixel-dense sensor" and not "high-resolution sensor." The terminology is very important here. The term "pixel-dense sensor" is being used to describe any DSLR whose sensor has individual pixels that are similar in size to the high-resolution 5Ds / 5Ds R. With this in mind and for our purposes, let's consider the following Canon DSLRs featuring sensors with pixel sizes less than 4.2µm to fall under the "pixel-dense" umbrella:


Notice that both full-frame and crop-sensor cameras are falling under the same umbrella. As we described above, the pixel density of the sensor is what really matters. As these sensors feature pixel densities that are somewhat similar, they're all getting thrown into the same group.

After spending a significant amount of time evaluating the EOS 7D II and 5Ds/5Ds R specifically, we think the camera-shake stopping shutter speed formula for these cameras should be:

I realize the formula doesn't look terribly different, but that " * 2 " portion makes a huge impact when using pixel-dense sensors. Keep in mind, this isn't the first time we've suggested this exact formula for arriving at a preferred shutter speed for such sensors. Bryan specifically mentions this formula in his Canon EOS 5Ds review, but I thought it was important enough to highlight on its own.

And on that note, with ever evolving sensor technology (producing even more pixel packed sensors), and the fact that everyone's a little different in how stable they are when holding a camera, the sad fact of the matter is that even the 1/(focal length * 2) formula is only a guide that seems to work well for this particular period of camera technology, and every person – no matter what camera they are using – should perform their own standardized tests to see what shutter speeds produce acceptable sharp images when shooting at various focal lengths with their camera(s).

Of course, an image stabilized lens will allow you to use significantly longer shutter speeds while avoiding the consequences of camera shake, but you'd still need to use a revised shutter speed formula (either ours or one developed using your own tests) to use as your starting point before considering the benefit of image stabilization. And when it comes to stabilization, a tool that's been around for a hundred years may be your best bet for making camera shake irrelevant – the humble tripod.

Going forward, as sensors become more densely packed with pixels, we must constantly re-evaluate the shutter speeds necessary to stop the effects of camera shake to achieve the sharpest images.