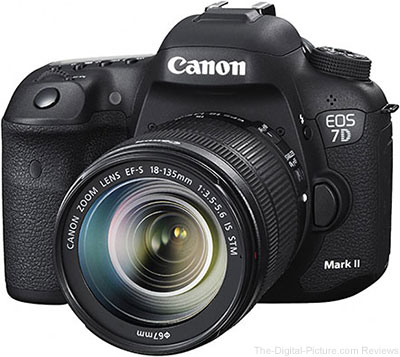 Following are the pair of 100% crop image quality comparisons I have been including in my Canon EOS DSLR Reviews. Read about the Camera ISO noise tests in the help section to learn more about these tests and how they are performed. A key take-away from that page is that noise reduction is completely off unless otherwise specified. The reason I want noise reduction turned off for testing (and off during most of my real-world photography) is because I want to see what the camera can do without the help of software (software help is equally available to most cameras) and because noise reduction is destructive to image details at the pixel level.

There are many MB of files required to be downloaded to make all of the links on this page function properly - please be patient while they load. Click on the ISO setting for the camera you wish to see results for. Then click on another link to compare results for another camera and/or setting. Watch the image carefully as you make the comparison click. 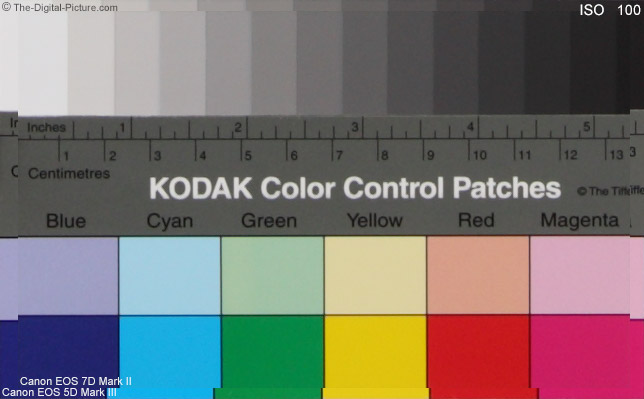 The color blocks, having areas of solid color, make ISO noise very apparent. If you can't see a difference in noise when comparing the color blocks between cameras, you are not likely to see any difference in your images. If the difference is tiny, there are likely other camera features that will be more influential in your decision making process.

Truth is, I expected to see practically no difference between the 7D II and 70D results until at least ISO 1600 or 3200. Canon's recent camera releases have shown most of their noise improvements at the upper range of their available ISO settings. However, after looking at this comparison many times, I see very slightly cleaner results from the 7D II starting at the base ISO of 100 with the advantage growing with ISO setting increase. This difference is slight through ISO 400.

At ISO 800 and 1600, the difference, while still not huge, is more easily recognized. The 7D II's advantage grows stronger at ISO 3200 and 6400. I have typically avoided these ISO settings on prior APS-C models, but I'm pleased to see ISO 3200 looking this good. At ISO 12800, I can almost read the numbers on the ruler. Compare the 7D II sample to the 70D sample at ISO 12800 to see the progress being made here. As you probably expected to hear at this point, improvements are also seen at ISO 25600.

Going where no Canon APS-C DSLR has gone before, the Canon EOS 7D Mark II brings us the found-only-in-full-frame-models-until-now ISO 51200 setting. Look at that example and ask yourself which of your images you would like to see look like that. Don't ponder that question too long. It is no surprise to me is that ISO 51200 produces a very ugly image with noise overpowering image detail and color. Perhaps ISO 51200 will be useful for nighttime surveillance and law enforcement, but I think that Canon marketing will make the most use of this bragging-rights setting.

Overall, I see more image quality improvement from the 7D II than I expected. I love when my expectations are exceeded.

A comparison that I am sure is on many people's minds is the 7D Mark II vs. 7D comparison. When comparing the 7D Mark II to the 5 year older original 7D, we must keep in mind that Canon has turned the in-camera sharpness level up a notch (equivalent to about a +1 "sharpness" increase) This practice started with the T4i and has been followed with all APS-C bodies released since (including the T5i, 70D and EOS M). The 7D Mark II is now included among the increased default sharpness models. I think that this is a positive change. I found the original 7D images to be somewhat soft without increasing sharpness slightly higher than I normally do, so I think Canon made the right decision here.

Increasing sharpness generally causes an increase in visible noise levels and the difference was visible when Canon first made this change. With the increased resolution factored in, a significant improvement in image quality would be shown if the 7D Mark II had noise levels similar the 7D. The good news is that the 7D Mark II has cleaner image quality at comparable ISO settings along with having a higher resolution and slightly sharper image details.

I would have been shocked if the 7D II's noise levels would have been lower than those from the full frame sensor format 1D X, 6D and 5D III models. As expected, they are not; however, it is hard to discern the difference at ISO 100 and even ISO 200 results are rather close. The differences increase as ISO settings increase. With their larger sensor advantage, full frame DSLRs have noticeably better image quality including better detail resolution, especially in low light/high ISO situations. Cost is, for most, the biggest downside to the full frame models (aside from the 6D).

I looked at the 7D II's image quality from many other angles. The results of some of these tests are located below the small break in the lines of links.

The "w/ USM" samples were the same 7D II photos as shared previously with the exception of being processed using the default Unsharp Mask sharpness settings in DPP's Standard Picture Style. If you compare these examples with the test's standard processing examples above, you will see a significant difference in sharpness. You also see the reason why I do not use the standard sharpening most of the time. The color blocks should not have halos around them. One positive aspect of the USM sharpening is that the sharper results do not show increased noise levels.

The next row down shows the same images processed in the Neutral Picture Style with a sharpness=1 setting. I use the Neutral PS in-camera because it applies a lower contrast tone curve to images, providing a better picture of the camera's available dynamic range on the histogram shown on the LCD. These results appear more dull/less exciting. There is a time and place for the use of this setting, but I usually change my RAW images to the Standard PS immediately after importing them.

The third row results, captured using Multi-Shot Noise Reduction, shows a marked improvement in noise levels. MSNR merges information from multiple (four) exposures taken in a full-frame-rate burst into a reduced noise image. The concept makes a lot of sense. I see at least 1 stop of improvement and, at the higher ISO settings, I see closer to two stops of improvement over conventional noise reduction.

While MSNR has been available in EOS DSLRs for quite some time now, I still have not found use for this feature. The downsides to Multi-Shot Noise Reduction include: MSNR is currently available only with JPG output (I would like to see this feature added to Canon's Digital Photo Pro software for RAW capture processing - perhaps as another HDR preset). Multi-Shot Noise Reduction is not so useful with moving subjects (or with a moving camera). Long exposure NR, Dust Delete Data, Multiple Exposure and HDR Mode must be set to off to enable MSNR. The 7D II reverts back to Standard NR in Auto/Basic zone modes, during video recording, in Bulb mode and when the camera is powered off. Flash is not supported in MSNR mode. After the 4 shot burst is captured, the camera remains "busy" for a relatively brief period of time while processing the merged image. So, while this feature is a nice idea, its limitations make it less useful in real-world applications.

Here is another noise comparison that includes fine details in a piece of fabric. The sample sets provided below are the same as those above.

The Canon 1D X has slightly fewer pixels than the 7D II and it shows details in a correspondingly smaller size. But, the 1D X results are sharper and cleaner. The 6D and 7D II sensors are similar in megapixel count, but again, the 6D's full frame sensor provides a cleaner result. The 5D III, having the highest pixel count combined with the larger sensor size, rules the resolution challenge. The advantage of all three of these full frame cameras increases as the ISO settings are increased.

I don't see many surprises from the fabric results after reviewing the color block set, but ... I continue to be impressed with the 7D II's improvements over prior Canon APS-C bodies. The 7D II shows off its higher resolution against the 7D and shows some high ISO noise level improvements. Though very similar to the 70D at ISO 100, the 7D II shows progressively cleaner results as ISO settings are increased. It remains unlikely that I will use the ultra-high ISO settings for any serious purposes.

The default USM sharpening example at ISO 100 shows strong over-sharpening that I find hard to look at and the Neutral PS shows a low contrast that I find most useful for creating the in-camera histogram that shows available dynamic range.

As I mentioned already, reduction of image detail is typically the collateral damage to using noise reduction algorithms. The 7D II's noise-reduced images do not appear too negatively impacted until ISO settings are increased to around 1600 (using the standard noise reduction setting), but ... ISO 1600 is also where the noise reduction becomes especially useful. Being aware of the price to be paid for using noise reduction will make you better able to determine how much noise reduction to dial into your images. If cleaner images are more important to you than detailed images, turn up NR!

Going into this review, I was thinking that there was little chance that I was going to be replacing my 70D with a 7D II. With a 1D X and a pair of 5D III bodies currently in my kit, I need APS-C cameras primarily to test EF-S and similar lenses. After seeing 7D II image quality exceed my expectations, and knowing the huge array of other 7D II feature advantages over the 70D, I began having serious second thoughts at this point in the review process. Overall, the Canon 7D Mark II looks impressive from an image quality perspective.

Back to the Canon EOS 7D Mark II Review.