Should I Use Canon's C-RAW Image File Format? 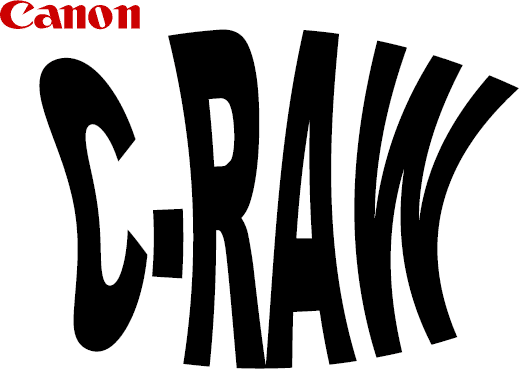 Introduced with the Canon EOS M50 was Canon's new .CR3 RAW file format, replacing the .CR2 format. Enabled with the .CR3 file format was the C-RAW (Compressed RAW) image file format that replaces the not-full-function M-RAW and S-RAW formats. Along with most other new camera features, I felt compelled to figure this one out. What started out as a brief look turned into a moderately-large project and I share some of what I learned below.

What are the file size differences between Canon RAW and C-RAW File Formats?

A compressed file is (usually) smaller than a non-compressed file and all welcome a smaller file size. More images fit on a memory card or hard drive and file transfers take less time. How big is the difference? Canon has indicated that we should expect 40% smaller files from C-RAW.

I created 6 comparisons using average scenes captured with a wide angle lens. Here are the results.

File sizes in these tests indicate size reductions ranging from 27% up to 54% with the average being roughly 42%, in line with the expectation Canon set. C-RAW files are about the same size as Digital Photo Professional-created 10-quality JPG files and that is impressive.

A compressed file is smaller than a non-compressed file (as just mentioned); however, non-compressed Canon RAW files are already considerably smaller in size than an equivalent uncompressed bitmapped TIFF file (even an 8-bit file), indicating that some level of compression is already being included in normal RAW files. But, there is obviously a big difference in the RAW and C-RAW compression algorithms.

It would have been great to hear that Canon created a breakthrough compression technology (and perhaps they did), but there is another primary reason for the smaller C-RAW size. Canon has advised us that the new C-RAW format uses a lossy-compression algorithm, meaning that some of the image information is discarded to save space, while RAW file compression is not lossy (or minimally, we don't know that it is). While none of us welcome our image data being thrown out, what really matters is whether or not we can notice what was discarded. Similarly, if you can't hear a 30kHz sound, it doesn't matter if your speaker can produce it (unless perhaps your dog cares).

I have asked Canon for advice on when the C-RAW format should or should not be used, but still await that reply. My guess is that most of the Canon USA technical representatives are not yet up to speed on this new feature. I really wanted to know and, what started as a simple evaluation of this feature turned into a project. I spent an afternoon (OK, more than a day), hunting for differences between RAW and C-RAW, looking at highly-magnified, identically captured and processed images with and without this compression used.

What are the image quality differences between Canon RAW and C-RAW File Formats?

You are going to be challenged to find them. Note that if you can't see the differences at 100% resolution, it is unlikely that you will ever notice them.

Let's start with a 100% resolution comparison example. These images were identically processed in Canon's Digital Photo Professional using the Standard Picture Style with sharpness adjusted to "2" (on a 0-10 scale). 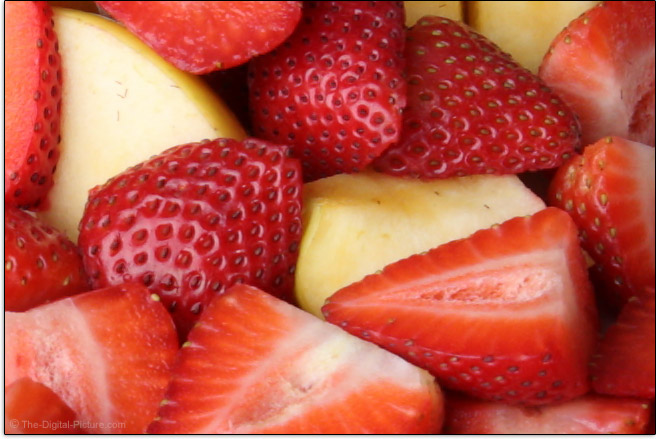 The berries were photographed under daylight-balanced studio lights and the low light shop scene was under bare tungsten bulbs. Likely the only difference you can ascertain are the details shifting a fraction of a pixel. I don't think the camera moved as I commonly saw the same difference in comparisons (and the little M50 was very solidly mounted on a Really Right Stuff TVC-34 Carbon Fiber Tripod and BH-55 Ball Head).

My next question was, could I tell the difference if I increased or decreased exposure during post processing? To test for that answer, I photographed the sliced fruit plate using a variety of exposures and the adjusted them as necessary in DPP.

Note that all of the JPG examples shared above and below were created from the similar base RAW image. Natural subjects often have the finest details and, in this case, those details taste great. I ate the fruit before I thought about the JPG capture being a good idea.

Also note that these examples are meant to be compared only within each row, not row vs. row. 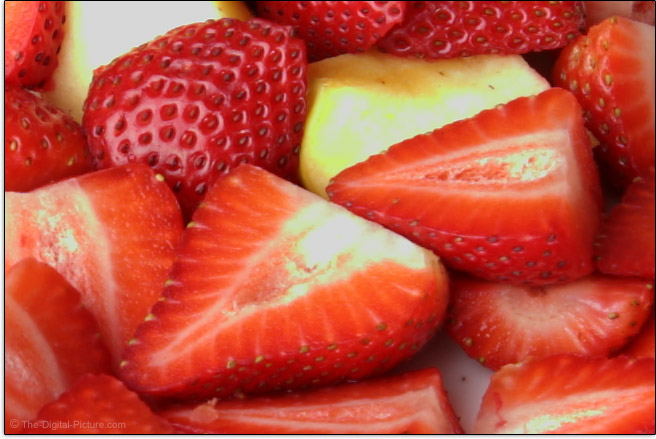 In the first row, images were reduced by 2 stops during post processing and the second set were increased by 3 stops. Again, it is very difficult to see the difference in the too-bright captures. Differences are rather obvious in the too-dark captures, but ... which do you like better? Noise is random, so different in this case is not necessarily the file format's fault. These two images are mostly equivalents with the C-RAW missing a tiny bit of detail at places. Still, it takes a very strong 3-stop boost in brightness to show even this tiny difference.

DPP does not easily adjust brightness for JPG images, so Photoshop was used for these adjustments, making the JPG comparisons not exactly "apples-to-apples" (though one of the yellow subjects is a cut apple). Still, it is easy to see the JPG images falling apart in these comparisons.

At this point, I was quite impressed with the C-RAW format but decided to push the comparison to the next level, looking at highly-magnified images – and 400% seemed like a nice big number. 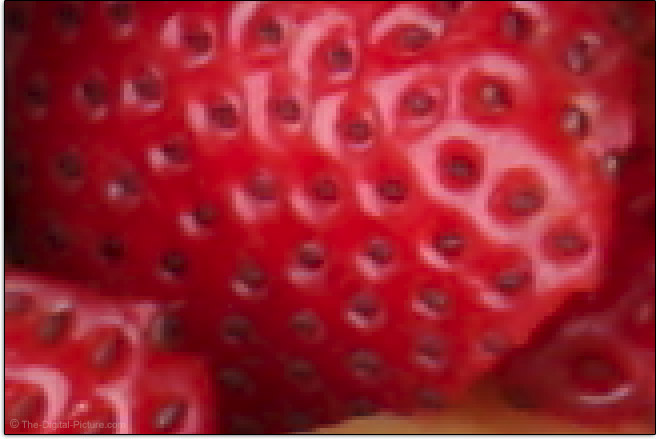 Here again, I can see only minute differences in all except the strongly-underexposed comparison. And in the latter case, picking a winner is harder than noticing a difference. The detail in the underexposed C-RAW sample is not quite as finely rendered as in the RAW file, but it is still going to be hard to notice a difference in real life image output. Shoot the same comparison again and the random noise will look similar in quantity, but still different.

Update: What Canon Inc. Says About the RAW vs. C-RAW Image Quality Difference

After repeatedly asking Canon, the only C-RAW downside shared with me is that there may potentially be more noise in shadows when increasing brightness during post processing. With Canon EOS R3 noise test results fresh on the laptop, I processed the standard RAW and CRAW images with a +3 EV setting, pushing the exposure by three stops. Even at high ISO settings, it is challenging (impossible?) to find a difference in this comparison, and even darker subjects than those shared from the same test images showed no discernable disadvantage to the C-RAW format.

While a compressed file format can be faster to read from disk, it may need to be de-compressed for processing. I was interested in determining if there was any penalty paid in this regard and ran 13 pairs of images through the DPP RAW processing engine, creating 16-bit TIFF files. The total time required to process each batch varied by less than 4% and some of that difference could possibly be attributed to background tasks my computer decided to run. So, there does not appear to be a penalty in terms of processing speed.

What was presented here is just a small window into the overall comparisons I looked at, but the differences illustrated here were the most-pronounced I encountered. The bottom line is that Canon has done an excellent job with the C-RAW format implementation. Being ever-skeptical, I'm still looking for a good reason to not use it.

Dear Canon, Can I Please Have a .CR2 RAW to .CR3 C-RAW Converter?

The new C-RAW file format looks like a winner and I would like to recover 40% of my current RAW storage hard drive space for, minimally, select folders. Please create a process to migrate selected .CR2 images to the .CR3 C-RAW format, saving the current recipes. A new DPP .CR3 C-RAW batch processing output option should suffice nicely.