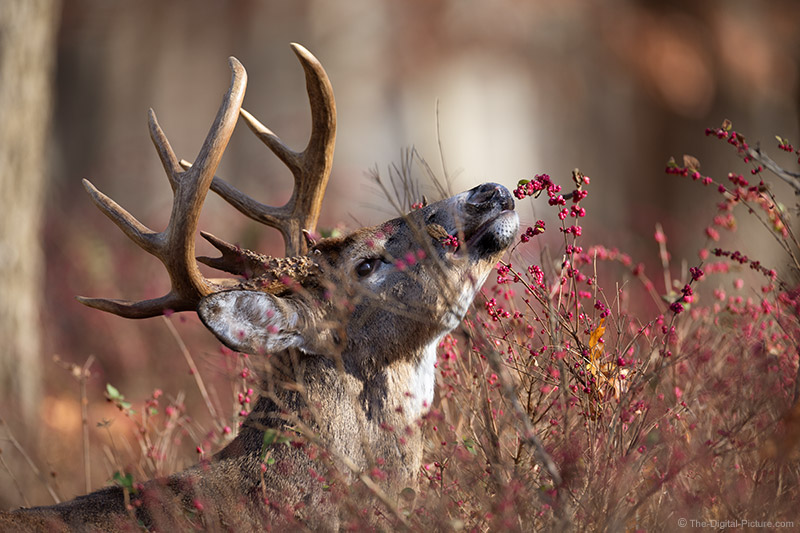 Patches of red berry bushes in Shenandoah National Park had my attention, and I was spending time near them, hoping that whitetail deer photo opportunities incorporating the berries would show up. A couple of days prior, I photographed a smaller buck eating the berries, but the images were not remarkable.

On this morning, I discovered an impressive 12pt point buck bedded near a berry-favorable area.

Bedded deer can get up at any moment, but they can also stay down for many hours. When it comes to antler size, bigger is almost always better, and I knew that few bigger bucks were in the area. Thus, I committed to hanging with this buck for the long haul.

Not too long after I sat down, there was a solid thump sound behind me. The doe and fawns hanging with the buck immediately got up and walked toward the sound. An apple had fallen from an apple tree, and the deer were going to eat it. Soon after this, the buck got up and began to move away — straight into the berries.

While incorporating the red berries was the goal, the thick berry bush branches were a visibility obstacle.

Traditionally, a camera attempting to autofocus on an eye in the brush led to the camera focusing on the closest branch in the view. In this situation, obtaining a keeper image typically required manual focusing, a challenge when the animal is erratically moving and the depth of field is shallow.

Game-changing is that the Canon EOS R-series camera's animal eye detection can often focus through the brush, creating a high percentage of properly focused images despite obstructions, such as those seen beside this buck's eye. This outstanding feature is one of many reasons to move to one of the latest mirrorless interchangeable lens camera models.

While this animal was not moving especially fast, its head was, and the Canon EOS R3's high frame captured the relatively few moments when the eye was visible in the obstructions.

I'll likely share more images of this buck. We spent the next 5 hours having an adventure together.