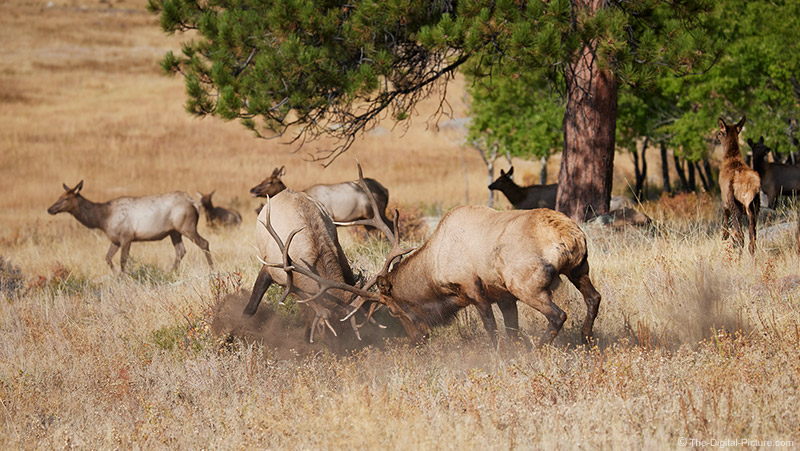 Bull elk fights are exciting to watch, but most don't end well for one competitor or from a photography perspective. When elk fight, they lower their nose down, leaving the most important parts of a wildlife composition, the eyes and heads, occluded by the thick, tall grass common in the fight venues.

Another frequent hindrance to a good elk fight photo is being in the right position to photograph a single bull with a long prime lens. A second bull in the frame often requires at least twice the working distance, and the fight may be over by the time that distance is traversed. Also frequent is for one elk's back side to turn toward the camera, blocking all of the action.

The story was different on this day. The versatile Canon RF 100-500mm F4.5-7.1 L IS USM Lens was mounted on the EOS R5 when the fight broke out, and the grass and weeds were thin and short.

Despite the excitement, I remembered to roll the shutter speed to 1/3200 (M mode, auto ISO, wide-open aperture) to freeze the action. The lens was zoomed to a focal length that contained the erratic action and focused on the mix of antlers and heads. Holding the shutter release down in continuous shooting mode ensured that this short fight produced a solid number of keeper images.

In this image, both bulls' eyes are visible, and the flying dirt helps to portray the intensity of the battle between these big bulls. Adding to my interest are the seemingly indifferent cows, along with the calf leaping out of the danger zone on the right side of the frame.

I often process my images to honor the original 3:2 aspect ratio, but that practice is not always optimal unless the end-use dictates such. Elk fights are often compositionally wide, and in this case, a wide crop seemed appropriate.