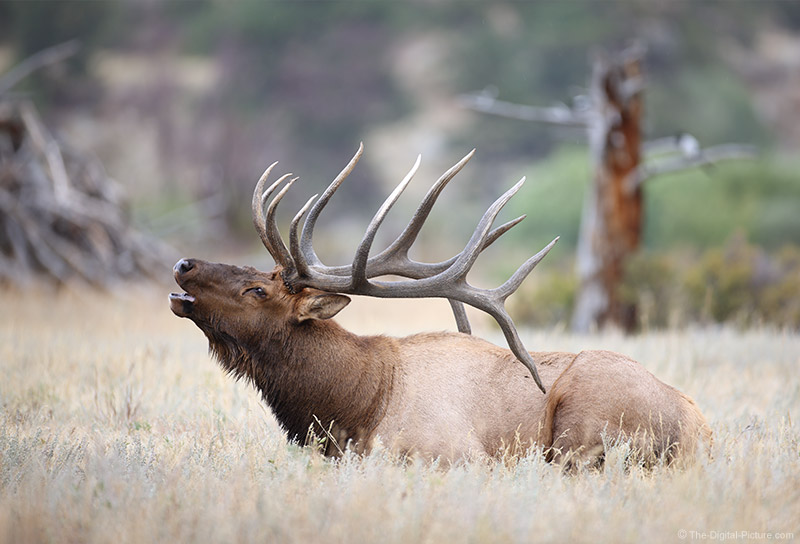 Stay with an elk long enough, and it will bed down, and a stationary subject is easier to photograph than a moving one.

However, once bedded, obstructions (such as grass or trees) are often an issue. This cooperative bull opted to bed in a meadow with short grass, meaning that foreground obstructions were not an issue.

The background can typically be counted on to present a challenge, and distractions are among the most frequently encountered issues.

In this image, the first background distraction avoidance strategy was to blur it away. The Canon EF 600mm f/4L IS III USM Lens rises to that challenge. The bokeh capability of many ultra-wide aperture lenses is raved about, but the 600mm f/4 combination is unsurpassed for diffusely blurring the background. The 600mm f/4 combination smooths the strong contrasting background lines, such as trees, that would otherwise catch the viewer's eye, distracting from the subject.

The big in-the-field challenge is aligning the subject within the background. Once it is bedded down, you know where the animal will be for at least a short time — usually long enough time to allow perfecting of the composition. In this scenario, the goal was to avoid strong lines and color differences intersecting the animal's body and antlers.

I love a low shooting position when photographing elk (and most animals). While this image was captured from a low position, the position was high enough for the elk's back to remain below the brush behind it.

For many, it is all about the antlers. The camera position that placed the rack between the background trees also worked well for the animal.

A sleeping animal is usually not too exciting (unless it is a baby). Fortunately, during the rut, bull elk make use of their downtime. When bugling (one of my favorite sounds), elk raise their heads which lowers their antlers for my also-favorite elk body position.