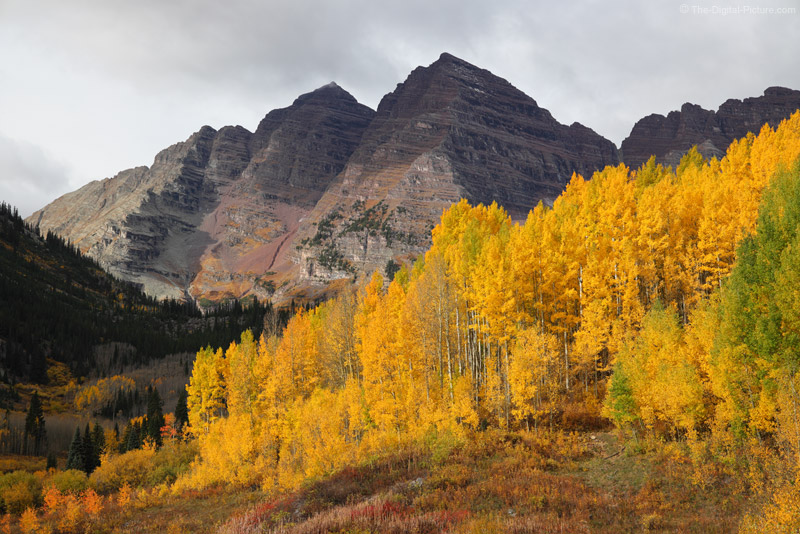 I was in Aspen, Colorado for two nights and the primary goal was to capture another set of classic Maroon Bells lake reflection images that included the amazing fall aspen color. After arriving at the hotel late in the evening on the first night, I set the alarm for 2:40 AM and went to bed. Probably no one thinks getting up at 2:40 AM is fun and ... that I was dragging my wife and youngest daughter with me ... raised questions about my sanity. Still, this is one of the most beautiful locations in the country and I calculated that it was going to be worth the sleep deprivation (and potential grief from the family) to get the perfect position along Maroon Lake.

Upon stepping outside, the heavy cloud cover was obvious and occasional light rain followed us. Landscape photographers live for the openings in breaking storm clouds and I stayed with the plan. I was one of the first photographers to arrive at the side of the lake, but I immediately encountered disruption of the plan. The first issue was that a rope now lines the path around the lake, preventing close access to the water. The second issue was that the lake level was extremely low. The restricted access and now-distant, very shallow lake combined to provide a dirt/stone former lake bottom as the image foreground and the lake was now small enough that the reflections were rather unexciting at the proximity available. In addition, the aspen leaves had changed (and many dropped) about a week early this year, courtesy of the drought that also accounted for the drained lake.

I continued to stay with the plan, remaining standing in my spot, alongside a large number of other photographers, from about 3:30 AM until close to 9:00 AM, waiting for a break in the clouds. That never happened and I finally decided that a decent photo was not likely to happen. The hike I promised the girls was looking like a great option and that became the plan.

After all of the early AM effort, the best scene of the day showed up in front of us while hiking near the far side of the lake. An opening in the clouds allowed sunlight to penetrate, brightly lighting a grove of aspens that were still holding their brilliantly-colored leaves. The key to getting my favorite Maroon Bells image on this trip was just being out in a great location, watching for something good to happen.