My Mother-in-law Called Saying Jack was in the Pulpit, a Short TS-E 135 Story 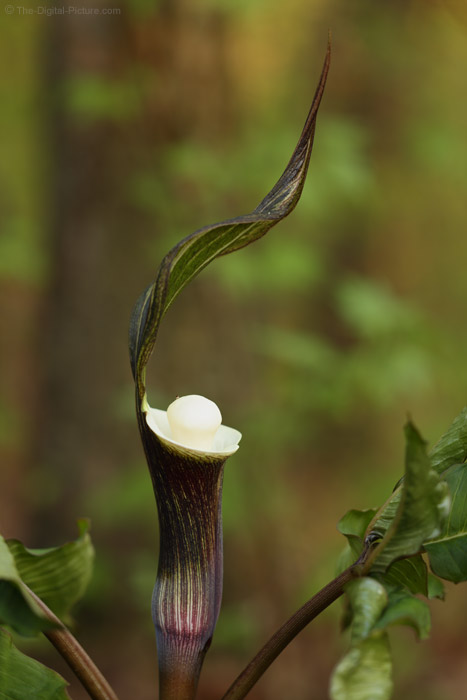 Making the long backstory short, my wife gave my father-in-law a Jack-in-the-pulpit seed for Christmas. My in-laws planted it in the spring and it grew, only to be dug out by an animal. It was replanted and the next year it was crushed by a bear. After installing three different types of fencing around the vulnerable plant, their Jack bloomed splendidly this year.

That led to the phone call from my mother-in-law, suggesting that I might have interest in photographing the plant. I was nearing the completion of a review and really wanted stay heads-down until it was finished. But, I felt the strong encouraging and started asking questions and for location pics via text.

Flowers do not often stay at their peak appearance very long (and who knew what might try to destroy this plant overnight). With the initial assessment leaning favorably to decent image potential, I went over with a MindShift Gear BackLight 26L full of gear, including a multi-off-camera flash setup and reflectors.

One of the challenges I faced was the background. Winter seemed to hang on forever this year and only a few days earlier a warm spell finally and very quickly accelerated leaf growth. Still, the available leaves, able to add a green color, were minimal and mostly brown was the surrounding forest and ground color, with dead leaves on the ground and bare tree trunks primarily visible. My tongue-in-cheek suggestion that we cut the flower was not found humorous.

Another challenge was the lighting. Good lighting is always key to a good picture. As the forest canopy had barely started growing leaves, I expected mottled direct sunlight to be a problem. The flashes and reflectors (able to provide shade as well as reflected light) were my insurance, ensuring that I could create my own lighting if necessary. Also, waiting until the sun set would give me full shade and completely even lighting.

As the background did not compare in attractiveness to the plant, blurring the background away was going to be a high priority and that meant long focal lengths and wide apertures. I contemplated taking the Canon EF 600mm f/4L IS II USM Lens with a 25mm extension tube, but the sloping ground was not going to give me optimal positioning from the subject distance that focal length would have required. I needed a shorter telephoto lens and opted to take the Canon EF 100mm f/2.8L IS USM Macro and the Canon TS-E 135mm f/4L Tilt-Shift Macro lenses with me. While the macro lens may be an obvious good choice, the tilt-shift lens has a 0.5x maximum magnification and with a narrow aperture desired, I thought the movements feature could be useful. That turned out to be a good choice as in the end, I only used the tilt-shift lens option.

Upon arriving on the scene, I found the sunlight to be mostly diffused on the plant with some of the background being touched by direct sunlight. Shade is typically cool in color temperature and late day sunlight is usually warm. That means a properly white balanced subject in the shade results in the sunlit background turning especially warm and that scenario often works well.

The composition was a bit of a challenge. I wanted to see the full flower without obstruction and the large leaves growing on two sides immediately limited the available angles. I also wanted to see the curved top of the jack in the frame and from the side or front of course. Upon working the scene, I saw that, with a low/level camera position, a pair of background trees were framing the Jack and keeping some border around those trunks framed the trees.

The inside of the pulpit (the spathe) and the Jack (spadix) of this particular Jack-in-the-pulpit are very bright in relation to everything else in the frame. Thus, my exposure goal was to make just a tiny part of the Jack blinking overexposed in the image review. I wanted the background to be as blurred as possible, emphasizing the Jack-in-the-pulpit in the image and that meant using the wide open f/4 aperture for this lens. I was using a tripod and wind was not an issue, so ISO 100 was selected for the lowest noise levels with the camera's mirror lockup and the self-timer mode being used. The shutter speed was adjusted until that small portion of the Jack was blinking during review on the camera's LCD.

As I worked the scene, adjusting/refining the camera position, I captured some bracketed exposures in case I wanted to the background to be brighter in the final image. In the end, I opted to use the original exposure for most of the image and dropped the Jack and pulpit by 1/3 stop to bring the brightest details down on the tone curve, slightly increasing contrast and bring a small amount of detail out on the nearly detail-void Jack.

Notice the tiny fly with red eyes sitting on the Jack? It is difficult to see at this resolution (I'll share a larger version on my Flickr account). Fortunately, I think he was only parking and not eating. Flies are attracted to Jacks by smell and in turn do the pollinating. He was an incidental subject that I didn't notice while photographing and he was only in a few frames. I liked the additional point of interest and opted to not stamp him out during post processing.

For this image, I used the tilt-shift lens as a normal lens with the movements in their zero position. But I did use movements for some images including this Jack-in-the-pulpit image.

As I was leaving, my mother-in-law mentioned "If they turn out well, I want to have a metal print made." Phew, going to take the pics was definitely the right decision.