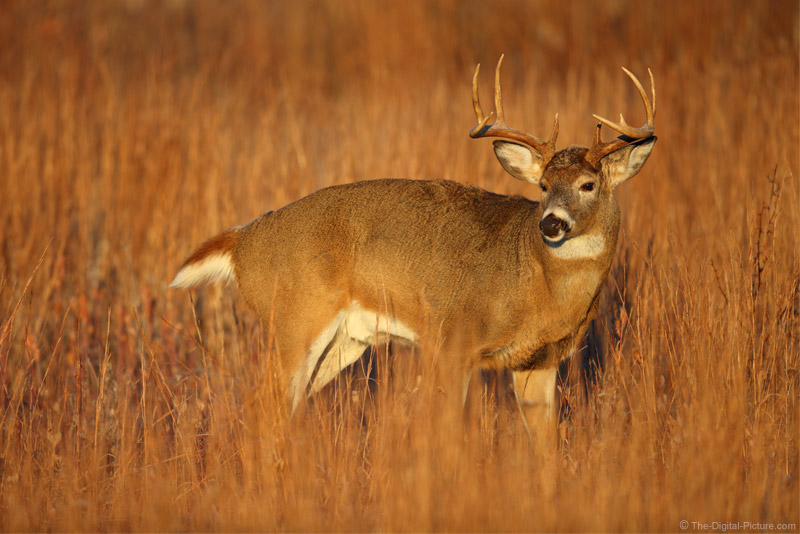 My Morning wildlife photography in Shenandoah National Park usually involves being where I expect to see wildlife when there is just enough light to start being able to see wildlife. The goal is to find a subject and be in position, ready to photograph, when there is just enough light to do so. The situation was golden on this particular morning. Very early, I found this nice-sized 9-pt buck tending a doe and worked into ideal position as the sun peaked over the horizon, giving me perfect low and warm light from my back.

The buck was looking great and the frost on his back and antlers was a bonus. I went to work, but promptly ran into a full buffer on the Canon EOS 5Ds R I was using. The 5Ds R buffer typically clears fast, but unfortunately, this full buffer took a very long time to clear. I didn't put a timer on it, but ... what seemed like an eternity was probably (rough guess) 10 minutes.

In those 10 minutes, I lost a significant number of images. What happened?

The problem started the night before. I put the 256GB SDXC card in my laptop and decided to quickly delete images I knew were inferior. The goal was to re-gain some capacity on the cards and to reduce the load on the redundant backups next on the to-do list. It is always risky to delete images directly from the card, but ... I was being careful – and apparently feeling bold.

After making a quick pass through the images I had time to review prior to bedtime and completing the backups, I put the card back in the camera. Having run into the buffer issue before, I took a short burst of images to ensure that the camera was working properly. However, in the morning, that burst proved too short.

At a high level, when files are deleted directly from the card using another device, the camera performs organizational maintenance before writing new files and, in this case, that maintenance took a very long time to complete. I've encountered this problem before, but with the test capture, I thought I would be OK in this regard. If doing as I did, capturing a burst long enough to trigger the organizational maintenance routine while still at home/in the hotel is very highly advisable. The best plan is to not touch the images written to a memory card and simply format new cards being used in the camera.

While I went away with many nice images of this buck, the frost melted quickly and I definitely left some good images in the field.