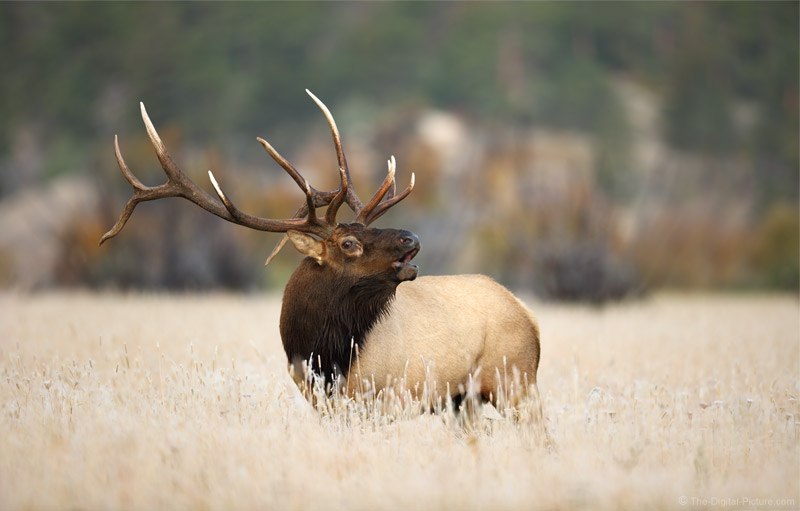 The sound of a bull elk bugling is music to my ears and I followed that music to locate this big boy in the dark. As soon as the Moraine Park meadow opened that morning, I was on my way to find this bull and that move proved quite productive.

While the golden grass in the meadow provides a photogenic, non-distracting base for an image at any time of the day, it is lighter in color when frost-covered and other colors take on a stronger contrast at that time.

Not so photogenic was this bull's right eye. He had apparently been injured in a fight and the camera-facing eye was not very attractive-looking. Obviously, I fixed that problem.

When I'm selecting down images, I'm constantly watching for issues in those selected for keeping. When an issue is found, I look for the fix in an image captured just before or just after the selected image. The issues I'm referring to here are many, including not-optimal subject framing and blinking as common ones.

With frames of the bull facing the other direction captured in the take, I was able to find one that enabled me to copy the eye, flip it horizontally and integrate it into my preferred image by pasting it in, transforming it (rotating in this case) to match the original eye and masking out the unneeded portion of the copied image (most of it). The portion of the eye that was repaired in this example is small, but without the flesh showing, the image is far more attractive (especially since our eyes are drawn to subjects' eyes).

The astute in the crowd have noticed that the horizontal pixel dimension in this image exceeds that of a Canon EOS 5Ds R image. Using the same image the eye fix was taken from, I manually stitched some additional border onto the left side of the frame by matching the details in the grasses and then blending the transition to offset the slight brightness difference caused by peripheral shading.

If the subject is important to you, don't worry about taking too many pictures. Not all will be optimal and having too many great images is a desirable problem.