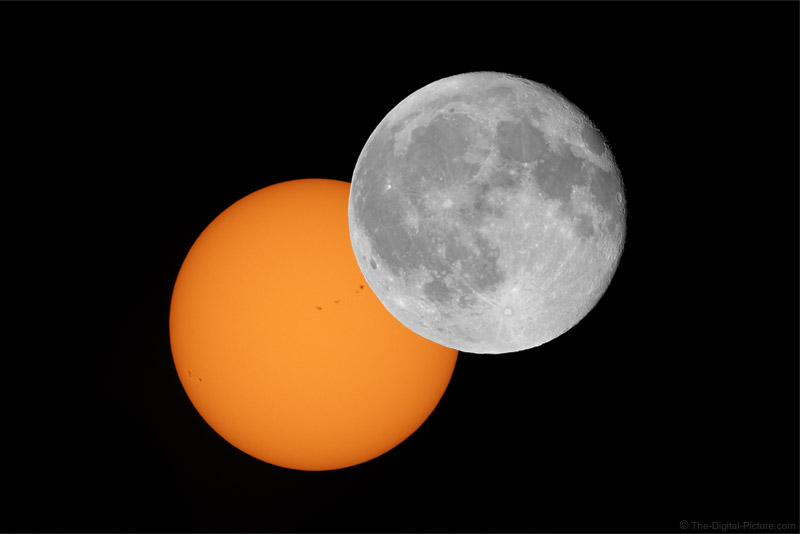 OK, perhaps calling it a composite would be more accurate, but "Hyper-HDR" makes a more-dramatic title, right?

During a solar eclipse, the moon moves between the sun and our viewing location, taking, minimally, a bite out of the solar disk. While it is possible to use an exposure that captures a small amount of detail in the moon during totality, I am not aware of anyone able to do so during the partial phases and, even during totality, the moon is poorly lit with the perimeter of the moon quickly becoming too bright. So, to get a perfect moon exposure, a composite is needed.

Remember us suggesting that you capture an image of the full moon just-prior to the August 2017 solar eclipse? Well, this post is about what you can do with that image.

Start by selecting one of your partial solar eclipse photos to use as the base image. The moon is going to show full regardless of the sun image selected and that means the balance between the amount of sun and moon showing is going to be determined by the sun image. I opted to show a significant portion of the sun in this composite. Hint: error on the side of showing too much sun because the moon can be positioned over more than just the missing portion of the sun.

Because my moon image showed a very slight amount of shadowing on the top right (clouds prevented me from getting an image on the night of the fullest moon), the bottom-left side of the moon blended better with the sun, driving my option to select a sun image with the top-right being eclipsed.

Process both of the images (if captured in RAW format) and open them as layers in an image editing program (Photoshop is perfect). Position the moon image on the top layer and use a layer mask to allow only the moon itself to remain visible (masking out all of the black). Reposition the moon layer so that it aligns properly over the sun and make any layer mask edits necessary for ideal blending.

That's it. The perimeter of the image will be pure black, so feel free to adjust the framing or cropping or even increase the canvas size to create the final image desired.

OK, so you missed one or both of these events? No problem. Get your solar filter and take a picture of the sun on the next clear day. Then, on a clear night during the next full moon, capture the moon image with the same lens (sans solar filter of course). Process both images and position your cut-out moon partially over the sun, creating a fake solar eclipse. Very few will spot the difference.