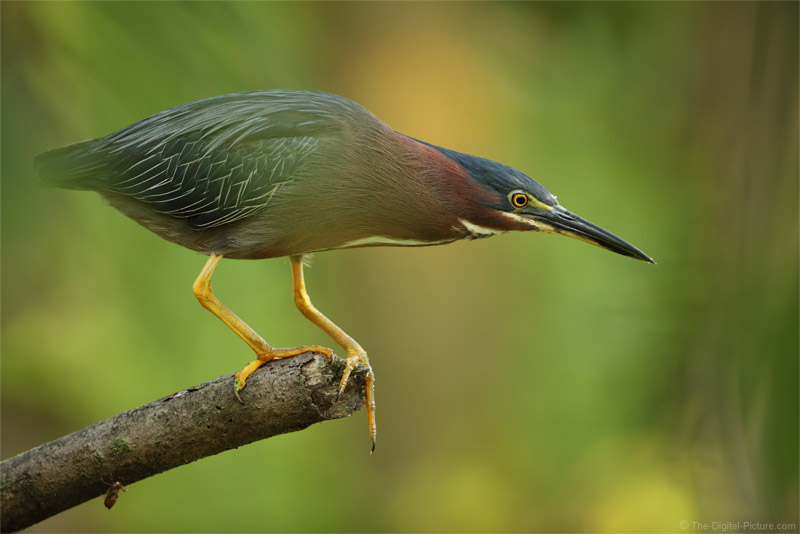 This little green heron was hunting for early morning breakfast in a relatively thick-growth area over shallow, duckweed-covered water. While the bird was not at all concerned about my presence, I was struggling to acquire a clear view of it, and finding a good body angle along with a pleasing background aligned within such an opening was especially challenging. When the bird hopped up onto this dead limb and walked to the end of it, pausing to determine its next move, I at least had a few seconds with a relatively still bird.

And at that moment, I had two of those three goals met. The heron was horizontal to the camera and the background was distant with good color. The foreground obstructions were the remaining issue.

I shifted my position enough to get a clear view of the bird's head, focused and held the shutter release down for a short burst (always photograph birds in high speed burst mode as you, minimally, never know when a nictitating membrane is going to come across the eye). When reviewing the result, I was pleasantly surprised to see how well the Canon EF 600mm f/4L IS II USM Lens faded the foreground obstructions into a "dreamy" look. Note that calling any kind of photo effect "dreamy" always put a positive spin on an effect that might otherwise be used to downgrade an image, but ... I do like how this one turned out with this photo having a unique appearance.

The lighting conditions for this shoot were ranging from direct early morning sunlight to full shade. I was using Manual exposure mode with the aperture set to wide open (f/4) and ISO set to Auto, allowing the camera to adjust to the lighting conditions as needed with me adjusting the exposure composition as lighting situations required. While shooting, I could quickly adjust the shutter speed by simply rolling the top dial. When the bird was about to strike at prey or otherwise move, I quickly selected a fast shutter speed (such as 1/1600 or higher).

Of course, when the subject was in full shade, as seen here, 1/1600 meant a very high ISO and that of course means higher noise level in the image. When the bird paused at the end of this dead limb, I quickly rolled the shutter speed down to 1/400 with ISO 2000 being camera-selected. Full frame ISO 2000 looks great. And, that is my little green heron story for today.