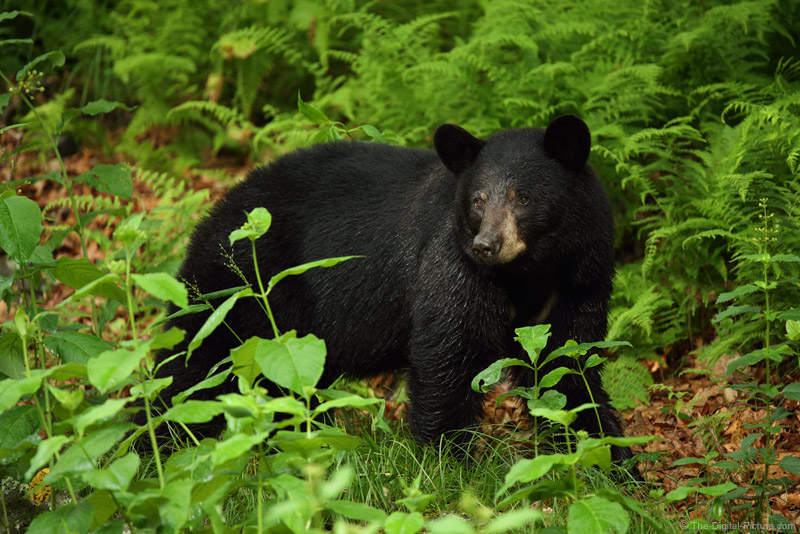 Catchlights in a subject's eyes are usually desirable in a photograph. A bright reflection in the eye creates a sparkle that brings the subject to life. While this applies to human subjects, it also applies to wildlife subjects.

This mother black bear (I know that she is a mother because she stashed her 2 cubs high up in a huge hemlock tree 100 yards/m or so behind her) was hunting for food in the woods in Shenandoah National Park. The woods were quite dark due to a heavy tree canopy, but there was a small clearing in the direction the bear was headed. I moved ahead of her and positioned for what I envisioned being the ideal situation that could develop ... and the bear was unusually cooperative.

The clearing of course had an opening with sky visible. Sky, especially the sun if the sky is clear, is bright and can create the desired catchlights. However, the angle on the eyes still must be correct to get that reflection.

A key point here is that bears generally walk with their head hanging down low and a downward viewing angle on animals' eyes seldom results in a catchlight. This is another good reason to get level with (or even below) your animal subjects, increasing the likelihood of catchlight reflections being created.

The other issue created by the head-down walking is the that bear's head falls below most of the beautifully-rich-green plant life in this area. While a bear back showing above the green plants may be interesting, visible eyes are usually required to pass for a keeper image for most serious bear photographers.

So, in order to see the eyes in this location, I needed the bear to look up. In a case where I couldn't have planned things any better, this bear hit the clearing, stopped and looked around.

This was a randomly moving animal. Though it was not moving fast, it was moving most of the time and its was a bit unpredictable, including making 180° direction changes at times. I had the camera in M (Manual) mode, but was using the camera's autoexposure system via the Auto ISO setting. With these settings, I could simply roll the top dial to get the shutter speed I thought I needed at any moment.

If the bear stopped walking (though even then it was always moving its head from side to side), I immediately took insurance shots at confidently-fast shutter speeds and then quickly began shooting bursts at longer exposures in attempt to get some even higher-grade images without motion blur (the longer shutter speeds resulted in lower ISO settings for lower noise). The 1/250 setting used for this image is not close to stressing the capabilities of this image stabilized lens at 560mm on a monopod (used over a tripod for setup speed), but the bear was still moving some. Fortunately, the 1D X II image quality is extremely good at the auto-selected ISO setting of 2500 used here. When the bear began moving, I quickly rolled the top dial to get an action-stopping shutter speed again.

The vibrant green foliage in Shenandoah National Park works very well for wildlife images. The wet bear hints at the recent weather conditions. There had been dense fog and a considerable amount of rain and as the 1/250, f/5.6, ISO 2500 camera settings hint, this image was captured under heavy cloud cover.

Though this bear appears to be lit by flash, no flash was used. The lighting is all natural ambient light. The bear's position in the opening meant that just enough cloudy sky was visible to brighten the scene and create a nice sparkle in the bear's eyes.

So, those are some lessons from a momma black bear. Hopefully you found something said here to be applicable to your own photography!