How to Photograph a Flock of Flying Snow Geese 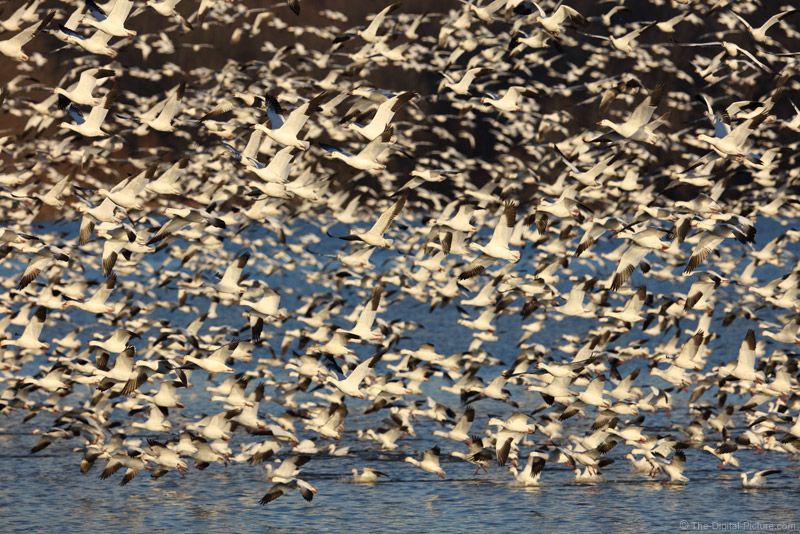 I've wanted to add an image of a densely-packed flock of flying snow geese to the porfolio for a long time. But, it was not until this year until I accomplished this task.

A good method of determining when the birds have arrived (or are expected to arrive) is to use wildlife management area status reports, including the historical reports as history in this form tends to repeat. While these reports are great aids to finding the flocks, remember that an entire population of these birds can completely leave an area within minutes. A location that is great on one day may be completely empty the next.

With a warmer winter than normal, the snow geese migrated early this year and, at the urging of two friends, I too went early. The location was Middle Creek Wildlife Management Area. Located at the border of northern Lancaster County and southern Lebanon County, Pennsylvania, this WMA is an about-2-hour drive from my house. While this is not a famous snow geese bucket list location that photographers most-target, the population at this location was estimated to be at least 50,000 on this day. And, that's a LOT of geese.

Mostly the white geese were swimming on the small lake, appearing as a large iceberg, or they were feeding in a nearby field, causing a small hill to appear snow-capped. While the huge numbers of geese in either of these two environments were interesting, the real show happened when they flew as a group. Even if one wasn't paying attention when the geese took off, a low thunder-like rumble was unmistakable and, if the flight path was overhead, the sky would darken (and an umbrella may be desired for protection from the strafing).

When photographing an individual bird, framing decisions are made in an at least somewhat more-controlled manner than when photographing a flock of birds. One reason that geese flock together is to make it more difficult for a predator to single out one bird as its prey and these flocks can have the same effect on photographers. With seemingly random chaos occurring, how does one create an attractive image?

Here are some thoughts for the flock:

The first thought is to simply go back to the basics. Start with focal length selection.

Perspective comes into play, but if you are photographing a flock of now-flying geese, it is likely too late to get a different perspective. Plan for that earlier, but ... geese always fly wherever they want to and predicting where they will fly will often be challenging. Predict as best you can (they like to take off and land into the wind) and react quickly to what happens.

How far away are the geese, how large is the flock and how wide of an area are the birds covering? If it is a small flock a long distance away and the birds are densely packed, a longer focal length will likely be best. That is, best unless more of the landscape is desired to be in the frame in order to create an environmental-type image. If the geese are close, the flock is large and/or the birds are widely spread out, a shorter telephoto lens might be a better choice.

For my Middle Creek WMA shoot, the birds went where they wanted to go, access was limited and even if it wasn't, moving fast enough to catch a flock of geese required some form of powered mobility. So, embracing what was available was, as often is, the thing to do. To handle this situation, I had a full frame Canon EOS 5Ds R and 600mm f/4L IS II Lens tripod-mounted using a Wimberley Tripod Head II. In the MindShift Gear FirstLight 40L at my feet was a second 5Ds R with a 100-400mm f/4.5-5.6L IS II mounted. When the flocks were far away, I used the 600. When the snow geese storm moved overhead in big numbers, I grabbed the 100-400. And when the squall became widespread overhead, I had the EF-M 15-45 on the EOS M5 ready to catch that scene as well.

Note that I started out this day with a 1.4x extender behind the 600mm lens, but quickly determined that the heat waves were too strong and sharp results were not possible at this magnification. Even at 600mm, many of my distant images were not tack-sharp until after the sun went low enough in the sky to end the heat source creating the air disturbance. So, yes, it is very possible to have too much focal length even if that focal length is more ideal for the scene as the additional magnification may be wasted.

The shutter speed required for sharp birds depends on how fast their details are moving across the pixels on the sensor. A large-in-the-frame bird moving at high speed across an ultra-high resolution imaging sensor requires a much faster shutter speed than a small-in-the-frame bird sitting on the lake does when using a lower resolution camera. Aperture and ISO settings are then balanced for depth of field and noise with the desired brightness being the other side of the equation. In regards to brightness, use care to not blow the white highlights on the birds, leaving no details in the white. If the birds were flying, I was mostly using a 1/1600 shutter speed and an aperture of f/8 or narrower was usually best to keep more birds in focus. Once the light faded, I began experimenting with much longer shutter speeds for a panning motion blur effect.

Bryan's Law of Bird Photography: The frame in a high speed burst containing the perfect wing position, head position, background alignment and lighting will time perfectly with the bird's blink.

When photographing birds, using the camera's high speed burst mode is often the rule. Especially with multiple birds in the frame, having many images to select from is going to be a big advantage for many of the above reasons.

I usually use only one specific AF point or one point plus the surrounding points. But, when a huge flock of geese is filling the frame, using the all-points-active can work very well, allowing you to concentrate on composition while the camera figures out which of the closest birds should be focused on.

Composition always matters and usually, the goal is a balanced composition. When such a huge flock of birds is flying, you need to figure out what a balanced composition is very quickly and see that in the frame no later than as it happens. The bottom line is that, unless you are shooting for someone else, if you are happy with the image, you nailed it. But, we are always trying to improve our skills and there are some composition variants that work well for the snow geese storm.

If the goose density is extremely heavy, just fill the frame with the geese and shoot away. Singling out specific birds is very challenging if they are not large in the frame and you are unlikely to notice the background through all of the geese. The huge quantity of birds essentially becomes a pattern and everyone likes pattern images, right?

If possible, determine which direction (in relation to the camera) the birds are flying and focus on your preference. I prefer an approaching side view, but all of the other directions have their own photogenic advantages, showing differing views of the geese bodies. If a large flock is flying within a location, such as over a lake, they may fly in a circular motion and you may sometimes have a choice. So, be ready to identify what you are looking for.

If the birds are not dense enough to hide the background, the background showing through must be considered in the composition. If the background is mostly a solid color, such as the side of a mountain, there may not be much concern in that regard. The background will be evenly colored and that often works well for flock backgrounds. It is hard to go wrong with a blue sky background for the white birds and images with birds flying against a sunset sky often look great.

Contrast draws the viewer's eye. If the background includes strong lines of contrast, such as where the land and sky meet or a waterline (often present where there are waterfowl), it is good to carefully position these lines in the frame. Use your landscape photography skills here – perhaps taking advantage of the rule of thirds.

When sitting or swimming snow geese flocks take off, they often peel away from one side of the flock in a surprisingly orderly fashion. The line between the stationary and flying birds can be incorporated into the composition.

When the birds are not filling the entire frame, additional compositional elements must be considered. Where the flock is positioned in the frame is a big consideration and again, the rule of thirds may be a good choice in these cases.

In the image I am sharing here, I could have filled the entire frame with a rather-high density of geese, but chose to include the water in the very bottom of the frame. I often like to keep a clean bottom frame border, giving the image a base to be built upon. Having the water in the frame in this case meant that some geese can be seen landing in addition to those still in flight.

When the flock was farther away, I often kept additional frame borders clean (void of geese) as well (especially the top border).

Especially if using an ultra-high resolution camera, don't forget that you can crop the image to create a better composition later.

Lighting always matters. At this location, I arrived early in the afternoon, giving me time to do some on-site scouting and planning to be ready for the late-day, low-angle, warm-colored light. Again, the birds fly when and where they want to fly and good images can be made at various light angles, but the sun at your back, your shadow towards the birds, early and late in the day is usually a sure-thing for wildlife lighting conditions. As mentioned earlier, shooting into the sunset can also work well, but be very careful to not look at the sun through a telephoto lens as serious permanent eye damage can occur. On a clear day, the sky opposite the nearly-set sun will also turn pink, creating a pastel background for your birds.

While a cloudy day will not provide the same illumination, the giant softbox effect from a cloudy sky results in a soft light with a lower dynamic range for greatly-reduced shadows and easier to control exposures. Ultra-bright, solidly cloudy skies may cause a background brightness issues when the birds are above the skyline. In this case, consider exposing the sky to be pure white for a high key effect. Or, there is nothing wrong with a gray background and silhouetting the birds is a strategy that can work.

At the onset of this trip, one of my goals was to capture frames densely-filled with geese, perhaps even with no background remaining. While I don't think any of my images were completely void of background, many images have multiple thousands of geese in them and some have very little background remaining. In addition to getting some fun images, it was a great learning experience and it was especially great to experience this phenomenal nature event.

Now, check the forecast and go find your own snow geese storm!