Telephoto Lenses are for Rainbows Too 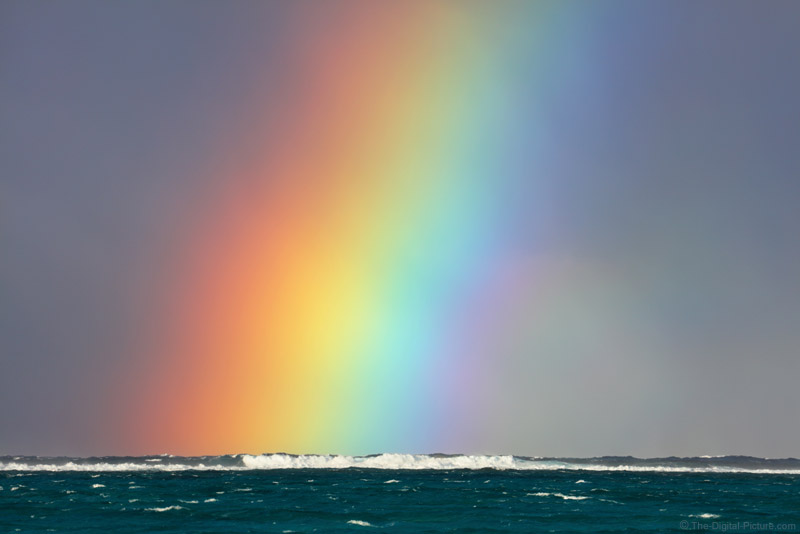 The first thing you reach for when a rainbow shows up is of course a camera, but ... what is the first lens you reach for? Probably one with wide angle focal lengths, enabling you to get as much of the rainbow in the frame as possible. That is often a great choice, but ... what if the landscape does not support a wide angle composition?

Especially if you find rainbows intriguing (where else can you find the entire visible spectrum separated and displayed brilliantly?), you will, over time, likely accumulate many average rainbow photos. These will have a narrow arc of color running through the image with whatever scene happens to be in front of you at the time, including houses, streets, power lines, etc. The rainbows always look great, but eventually ... something more is needed for the image to be worth keeping. With plenty of average rainbow images on my hard drives, I now often keep driving, working, etc. while admiring a rainbow as a so-so landscape is no longer a good enough supporting background.

Especially when facing a rainbow with a just-average landscape surrounding it (or, when there is a partial rainbow), consider grabbing a telephoto lens to photograph it. With a narrower angle of view than wide angle lenses, telephoto lenses can make great images with a less scenic background available, allowing the rainbow's beauty to be isolated from less-desirable surroundings. If the sun is high enough, a short telephoto focal length (70mm in that example) can even keep some of the arc in the frame. Zooming in to 150mm permits more surroundings to be excluded (an entire town in that case).

For the image I'm sharing here, I zoomed to the longest focal length I had available. A benefit of that 400mm focal length was that the amazing colors of the rainbow filled a much higher percentage of the frame than a wide angle focal length would have provided. It also made the sheets of rain more prominent within the rainbow.

Yes, an even longer focal length would have filled an even higher percentage of the frame with color and 600mm through 800mm focal lengths should also be considered for rainbow capturing at times. But, as mentioned, I didn't have a longer lens available. However, a benefit from having 50 megapixels of resolution is that this image can be cropped considerably and still retain very high quality, a result that can still be output to a large size. While I contemplated cropping (and still may create that variation), I decided to share this one as-captured with additional elements supporting the color. I like the ocean providing a base and context for the storm and the shading variations to the sides of the rainbow help indicate the heavy storm's presence.

The heavy, dense rainstorm approaching over the Atlantic was a welcomed sight on this afternoon (from an imaging perspective at least). The direct sunlight reaching the storm created an intense display of color that lasted long enough to ... allow me to create more images than I needed. I admit to capturing some wide angle images of this scene with the lens I was already using prior to reaching for one of my favorite telephoto zoom lenses. After installing and adjusting a circular polarizer filter, I captured a variety of images, including both camera orientations, a variety of focal lengths and sometimes with clouds passing in front of the rainbow worked into the compositions.

This rainbow image was captured in North Caicos, but aside from the water color, it could have been over any large body of water. I mentioned that wind was an issue on this entire trip and, with a storm approaching, the wind was especially strong while photographing this rainbow. With the sun at my back and the wind in my face, I left the lens hood in the pack. The filter was completely shaded by the lens and large hoods become a source of vibration in the wind. I sat on the ground with my elbows on my knees, my left hand holding tightly over the lens mounted to a retracted Really Right Stuff TVC-34L Carbon Fiber Tripod. With the camera's eyepiece pressed against my eyebrow, the setup was completely locked down and my sharp image rate was nearly 100%.

Rainbows are made possible by the right weather conditions and ... the weather can be unpredictable. But, when your next rainbow shows up, consider chasing it with your telephoto lens.