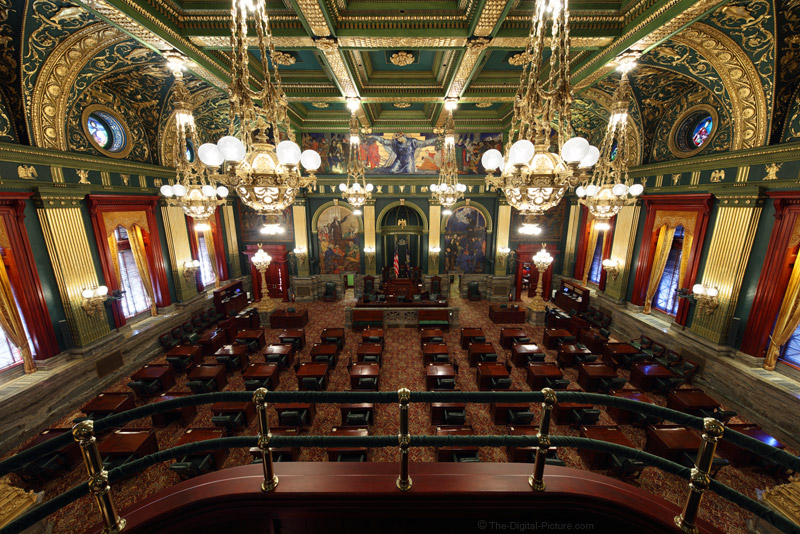 There are only a small handful of DSLR lenses that can take in a view this wide. Basically, excluding fisheye lenses, the Canon EF 11-24mm f/4L USM Lens or one of the three Sigma variants including the latest, the Sigma 12-24mm f/4 DG HSM Art Lens are your choices.

With the senate recessed for the holiday, I made a visit to this location to give the Sigma 12-24 Art a workout. The angle of views afforded by this lens are a blast to use and with the widest, I was able to capture a great deal of the French Renaissance architecture in the senate chamber.

While the 12mm angle of view was great to have, the bright lights were a bit of a problem from an exposure standpoint. But, they were very beautiful and I wanted to see some of the detail in them. Thus, an HDR technique was needed.

The primary image was captured at 2.5 seconds with a second image captured at .4 seconds (2 2/3 stops darker) to retain some of the detail in the lights. It can be very challenging to composite two images captured at such drastically different brightness while retaining a natural appearance, but here is a technique that proves rather easy.

First, stack the two images in Photoshop with the brighter image on top. Then add a layer mask to the top layer and select the layer mask. Select the brush tool, select black as the color and reduce the opacity to something low, such as 10%. Select a brush size appropriate for the area that needs detail added (areas too bright in the original exposure) and adjust the brush hardness as desired (softer may be better in this situation). Then paint the blown areas until just the right amount of detail shows through. The process is easy and the results appear natural.

When photographing a symmetrical scene such as this one, it is usually desirable to have the scene perfectly centered in the frame (for perfect balance) and to have the camera perfectly centered in the room (to avoid perspective-caused converging horizontal lines) and horizontally level (to keep horizontal lines parallel to the frame borders). As you can figure out from the resulting image dimensions, I cropped this image very slightly from the top left to perfect my capture. Note that no distortion correction was used. Even at 12mm, this lens is a good performer in this regard.