Wearing Black and Having Red Highlights 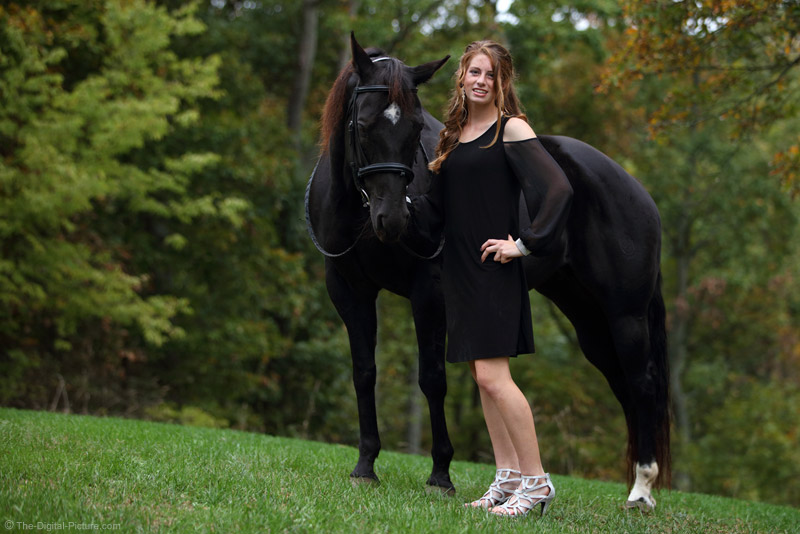 You have 20 minutes to capture a complete set of homecoming pictures. And, there is a complication. Actually, three of them. A palomino horse, a blue roan (black) horse and a dog are to be included in most of the photos. And, one of the horses "needs" to be bridal-less for a segment of the shoot.

It was a crazy day (I know, that is not unusual), but high on one daughter's priority list was getting pictures of herself dressed up for homecoming. Having been through this scenario before, I knew what to expect. Primarily, there would be no time remaining for those pictures. I also knew about the desire to include the animals, but the specifics had not yet been communicated to me (even though I had asked).

Oh, I forgot to mention – it was lightly raining and with horses involved, the shoot was of course outdoors. Looking on the bright side, the heavy cloud cover made lighting easy with no harsh shadows and a reasonable level of dynamic range in the scene which included a black dress along with the black horse. Also positive is that with animals in the picture, the subject always seems to find it easier to smile naturally.

None of the subjects remained completely still at any point, meaning that my timing, framing, focus distance, etc. was always being challenged. In the end, I "borrowed" 10 minutes from the next-scheduled homecoming event and came away with an adequate number of keeper-grade photos. And, I thought that I would share one of them with you today.

For low light outdoor portraits with a variety of subject framing required, the Canon EF 70-200mm f/2.8L IS II USM Lens was my choice. It was a rather easy choice for me to make. It has only good portrait focal lengths in it and a nice range of them. The wide max aperture was ready for the low light levels and that this wide aperture was available over the entire focal length range, meant that I could lock in an exposure and, as long as the light levels did not change, all images would have identical brightness. While a right-on exposure was my intent, any adjustments needed could be globally applied for very fast post processing. The wide aperture combined with the telephoto focal length range created a nice background blur, making the subjects stand out in the scene. Being weather sealed made the light rain a non-issue. The Canon EOS 5Ds R behind this lens allowed me to shoot with framing slightly loose if I needed to, with cropped images still having very high resolution remaining.

As the animals were not overly cooperative, I tried to work with the positions that were available at any given time. Of course, the handler's position was partially dictated by the animal's position and ... there was a constant challenge to keep the subjects in attractive and complementary positions while keeping the background aligned in a pleasing manner. We didn't quite get the left hand position right, but all things considered, it was good enough.

Notice the low-to-the-ground camera position? There had been a long drought and the grass was thin with lots of brown spots showing. By shooting from low to the ground, the grass appeared thicker with a better-colored foreground being the result. As I was shooting downhill slightly, the low camera position was also complementary to the subjects.

After we finished, Brittany's hair was flat (due to the light rain), over two inches of her heels were covered in mud (shoes sunk into the grass) and the dress was dirty (the horse gets the blame for this one), but ... she made it to the big event and the photos I sent her later that evening made her day. So, all was good in the end.